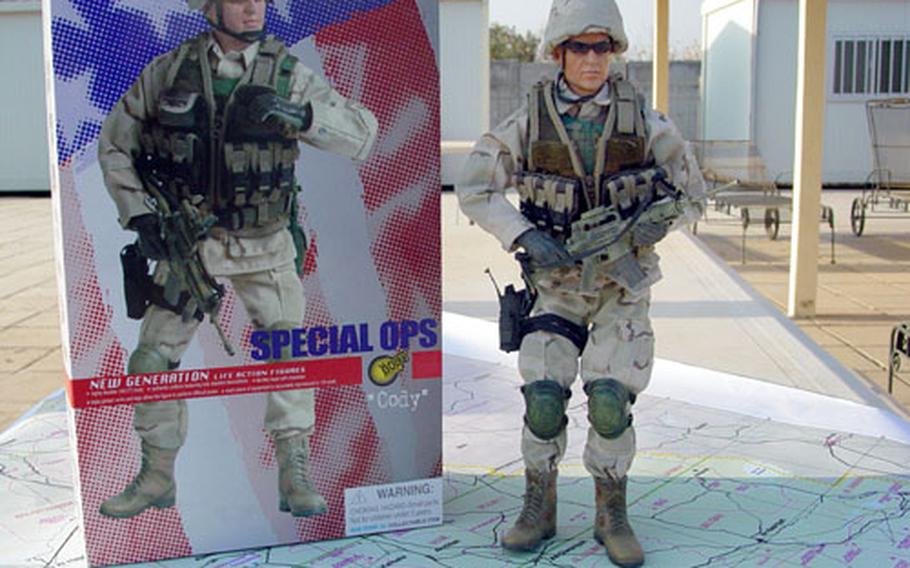 Special Ops Cody, who was distributed to AAFES stores downrange, made the news this week when insurgents claimed they had captured an American soldier. The soldier, it turned out, was the African-American version of the toy seen here. (David A. Accetta /Courtesy of AAFES)

The $39 action figure apparently kidnapped in an insurgent hoax to drum up American alarm has done well for himself: He&#8217;s selling on eBay anywhere from around $100 to more than $230, and he&#8217;s even scarce to be found downrange.

A blurred photo posted on a Web site Tuesday by a group called the Mujahedeen Brigades was alleged to be military man John Adam, whom Iraqi insurgents pledged to behead if coalition-held prisoners weren&#8217;t released. The U.S. military, however, denied that a soldier was missing.

Then Liam Cusack, marketing coordinator of Dragon Models USA, recognized that determined jaw and vacant eyes as those of his Cody, a toy the company manufactured for the Army and Air Force Exchange Service for sale at bases in the Middle East.

Cusack has been besieged by reporters ever since. Television crews showed up at his offices in the city of Industry, Calif. Crazed customers called him, too, wanting a Cody of their own.

The masses may be disappointed. Cusack said the African-American version of the toy, which was seen in the photo, was made exclusively for military exchanges. Dragon doesn&#8217;t sell directly to the public, and Cody was a limited edition hero.

The toys on eBay, then, likely came from the desert.

According to AAFES headquarters in Dallas, the exchange shipped 3,864 of the toys overseas in winter 2003, and deployed another 2,292 last September. Most were shipped to Iraq and Kuwait. But only about 20 percent of those are the African-American version.

According to the exchange, Cody is scarce in the field as well. An AAFES spokesman, Maj. David Accetta, was able to find one, and only one, Caucasian Cody at the Camp Liberty store outside Baghdad. According to Dan Tompkins, the vice president of AAFES operations in Iraq, it isn&#8217;t clear whether the platoons of Cody figures were bought because of the hostage crisis or simply because of an earlier Christmas rush.

If there are any Cody troops in the field, they will not be brought back to base but allowed to remain expeditionary.

Cody has also incited spoof. A site run by a group called Jihad Watch posted a picture of a princess-looking doll and the headline, &#8220;GI hostage&#8217;s mother pleads for son&#8217;s life.&#8221; A blogger posted a photo of another Dragon model, Col. Danny McKnight, ready to deploy to save Cody&#8217;s life. Another blogger posted a photo of a plastic, paint-faced KISS bassist Gene Simmons held hostage at the point of a toy rifle.

The Daily Farce site scooped the world, showing a pregnant Barbie in angst over the fate of the soon-to-be-father in fatigues.

Were Barbie really to give birth to a Dragon military toy, how long would she have to wait?

Cusack said it can take anywhere from 90 days to a year to research, develop and finally debut a new toy.