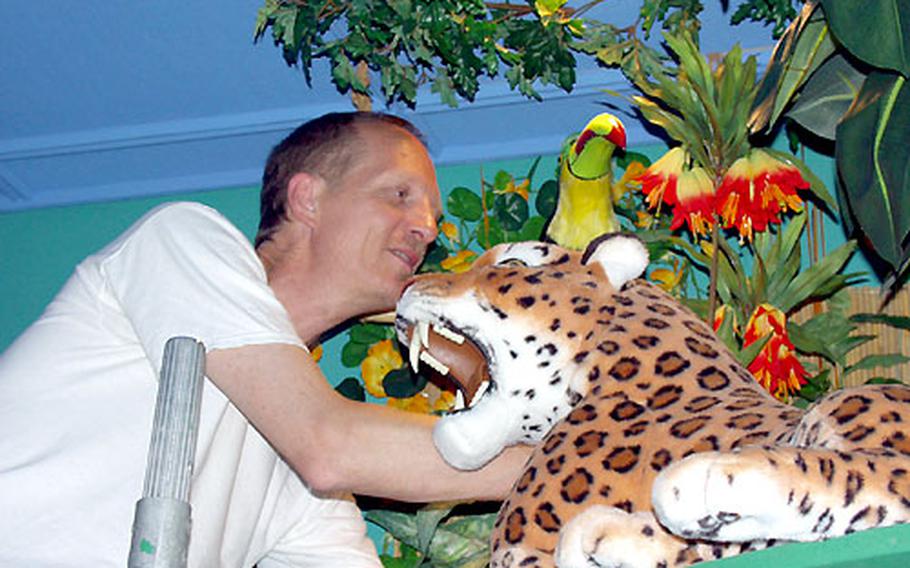 Eric Escher, graphic artist and interior designer for the 26th ASG maintenance division, sets up a tropical scene in a ceiling corner to help bring the Kid&#39;s Zone to life. (Jessica Iñigo / S&S)

Eric Escher, graphic artist and interior designer for the 26th ASG maintenance division, sets up a tropical scene in a ceiling corner to help bring the Kid&#39;s Zone to life. (Jessica Iñigo / S&S) 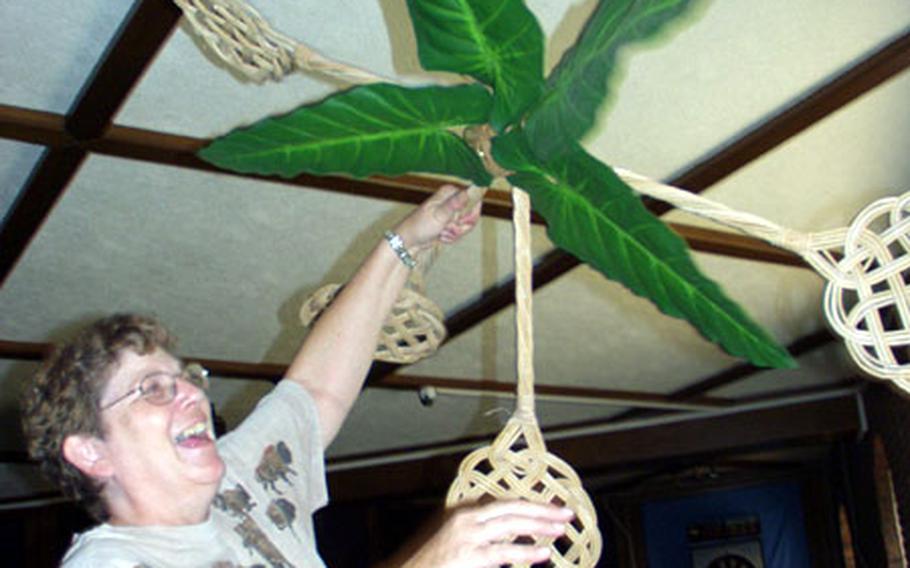 Pat Hindle, a display designer for the Kid&#39;s Zone, demonstrates what the ceiling fans will look like. (Jessica Iñigo / S&S)

A jungle has cropped up, buffaloes have sprouted wings, and folks are getting ready to party, celebrating all the new projects under way at Cambrai-Fritsch Casern.

The Kid&#8217;s Zone, the first of many community projects at the base, is scheduled to open Aug. 27 with a host of animal mascots to greet guests to the jungle-themed pizza-play house.

The $300,000 project is changing the Darmstadter Club into an entertainment and eating facility aimed at family fun.

Pizzas, Italian subs, salads and wings are all on the menu at the Kid&#8217;s Zone. Also, a climbing and obstacle maze and a host of arcade games will be available for those not interested in eating.

Similar eateries have opened in Heidelberg and Kaiserslautern, but the Darmstadt Kid&#8217;s Zone is planned to be the most exotic.

Eric Escher, a graphic artist and interior designer, is leading a group of employees making huge butterflies, tiny tigers and brilliant toucans come to life. A jungle mural is in the works to lead guests out of the ordinary and into a fun-filled atmosphere.

Another change to the community is the $2.5 million project at the former Rainbow Club near the entrance to the base.

Renamed the Escape club, it is set to reopen around November and will be known as a high-energy night club that offers &#8220;world-famous wings,&#8221; Schmitzer said.

Winger&#8217;s Restaurant will be attached to the Escape club and will provide a casual dining experience featuring their house specialty &#8212; buffalo wings.

A Winger&#8217;s promotional ad said, &#8220;These are not your typical hot wings, but rather a secret combination of spicy and sweet that is unmatched.&#8221;

The varied menu will also include diner classics, such as burgers, sandwiches, fajitas, ribs, grilled fish and chicken, salads, and desserts.

Another eatery will open at the Tech-na Bowl bowling alley on the base around November. Philly Joe&#8217;s sandwich shop will specialize in steak and chicken sandwiches, but also will serve other finger foods. Also, a hamburger joint may be added to the $30,000 project, Schmitzer said.

The bowling alley remains open throughout the renovations. For the next six weeks a private organization will hold a fish fry from Friday through Sunday to provide meals to bowlers, Schmitzer said.

The bowling alley has also been revamped with black lights and sound system for the Cosmic Bowling nights.

Also recently renovated are the rooms at the Patriot Inn, across from the base. Renovations include new carpets and furniture.

Future projects include a two-story laser tag arena, which will be added to the paintball field at the hangar in nearby Griesheim in spring 2004.

&#8220;This will be a one-of-a-kind structure not available anywhere else in Germany,&#8221; Schmitzer said.

The arena also will have climbing walls, bungee runs, various inflatable bouncing castles, and a small snack bar, he said.