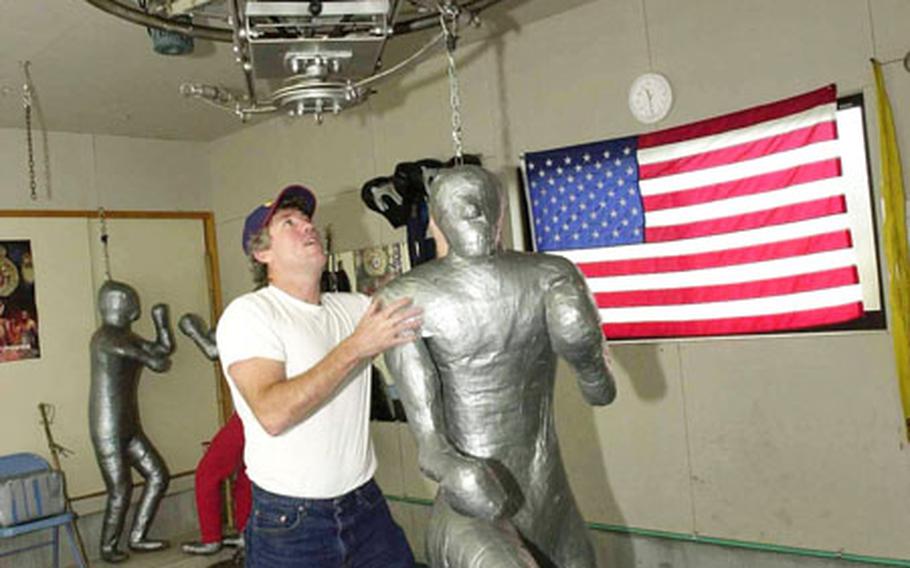 Louis Lee hangs a 75-pound sparring dummy on the Ring General training apparatus he conceived and designed. The machine’s motion provides glove and kick boxers with a variety of attacking positions and a full body workout. (Wayne Specht / S&S)

Louis Lee hangs a 75-pound sparring dummy on the Ring General training apparatus he conceived and designed. The machine’s motion provides glove and kick boxers with a variety of attacking positions and a full body workout. (Wayne Specht / S&S) 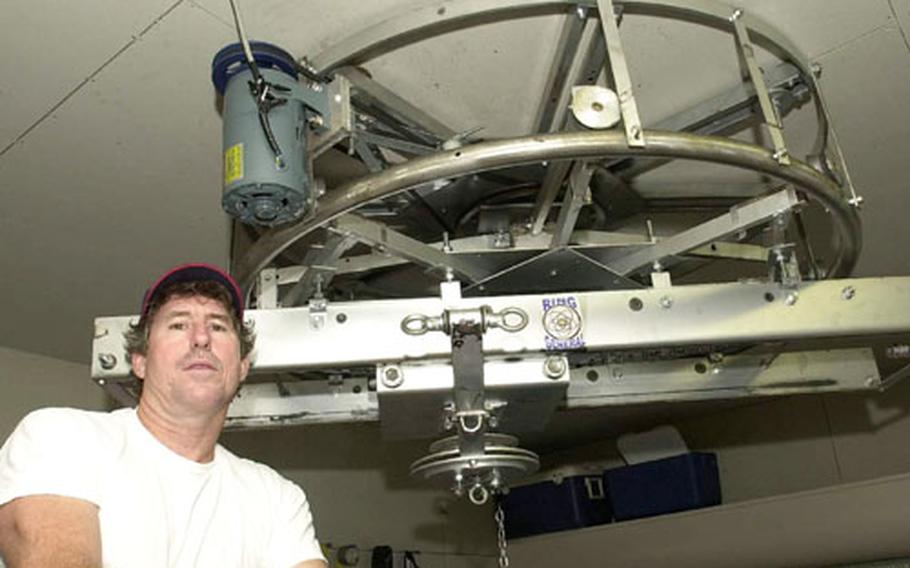 The tinkerer and martial-arts aficionado has designed what he calls the &#8220;Ring General&#8221; &#8212; a ceiling-mounted, electric-powered training apparatus for kickboxers. The formidable device would provide quite a workout for conventional boxers, too.

&#8220;Martial-arts combat fighting is all about movement, and I didn&#8217;t like most of the commercially produced trainers out there today,&#8221; said Lee, 46, the husband of a government employee at Misawa Air Base.

He said the idea for a training device that could offer a multitude of constantly changing positions has been kicking around in his head for years, but only in the past three has he brought it to life.

The Ring General consists of a collection of pulleys, idler rods, drive belts and small wheels rotating around a stainless-steel ring.

It&#8217;s powered by a half-horsepower, high-torque electric motor that keeps Ring General rotating in a 360-degree circle while the anchor point for training dummies &#8212; actually a spring cannibalized from an automobile &#8212; slides back and forth along a smaller rail.

Lee also has designed a family of sparring dummies &#8212; gray-color mannequins in different fighting poses &#8212; ranging in weight from 20 to 75 pounds. Each one can be mounted to the car spring cross member.

What&#8217;s inside each mannequin is a proprietary secret, said Lee, as is his out-of-pocket costs to make each Ring General if he decides to go forward with production models.

Dummies never replicate the same position when the machine is turned on.

&#8220;Placing a dummy on the outside of the spring you get a lot of action with less control compared to placing it on one of the inside hooks,&#8221; said Lee.

Lee said about a dozen of his friends have tried using the device at his small training ring. He said most have given Ring General their approval.

Lee says he has about $20,000 tied up in his Ring General prototype. Some of that total went toward parts manufactured or shaped at local Japanese metalworks.

Another chunk of that investment has gone to a Grand Rapids, Mich., patent attorney for research fees so Lee can obtain a U.S. patent.

He believes if he can get 5,000 of his devices into what he estimates are 20,000 martial-arts training rooms in the United States alone, it will be a business success story for him.

But he has built the prototype only, and admits he has &#8220;a lot to learn&#8221; about the business of marketing his invention.

He said he may approach the U.S. Olympic boxing and tae kwan do teams at their Colorado Springs, Colo., training headquarters to learn whether they would be interested in accepting a demonstrator model of the Ring General.