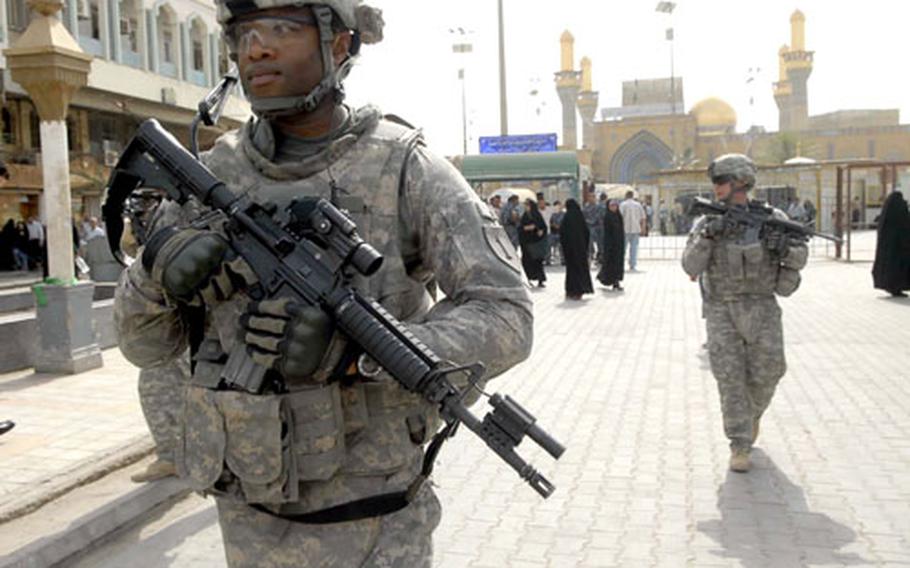 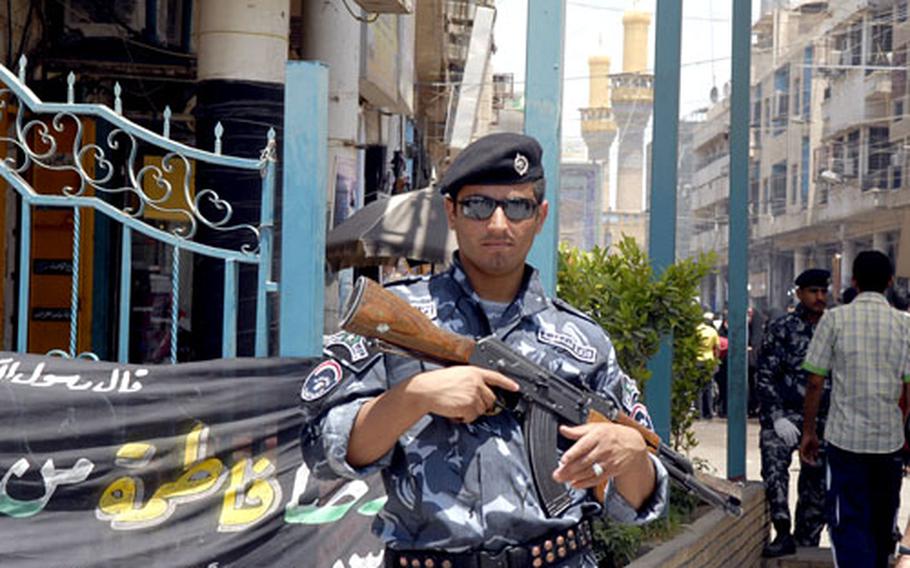 A member of the “Shrine Battalion,” a group of former militiamen that now protect the inner sanctum of the Khadamiyah shrine, stands guard at a security checkpoint near the shrine. The guards answer to a shadowy figure wanted on terrorism charges by the Iraqi government, and trust between conventional security forces and the shrine guards is low. (Heath Druzin / S&S)

BAGHDAD &#8212; Soldier, philanthropist, gangster, terrorist &#8212; Saad Abadi is apparently any or all of the above.

He has rarely been seen since an abortive attempt to arrest him in November. But this shadowy figure and the ex-militiamen loyal to him hold the key to protecting one of Baghdad&#8217;s most important religious symbols and, perhaps, the fragile sectarian peace holding across the country.

As you peel back the dizzying layers of security around the Khadamiyah neighborhood of north Baghdad and its revered mosque, you find U.S. troops on the periphery, with saturation levels of Iraqi soldiers and national police manning checkpoints every few blocks. There&#8217;s also a sprinkling of local police, whom neither the army, Iraqi National Police, nor many U.S. troops trust.

As you get to the iron gates before entering the massive golden-domed shrine, you meet a group of former militiamen, now in police uniforms.

Inside the main gates is a no-go zone for Iraqi and U.S. soldiers. The mosque grounds are protected by members of the "Shrine Battalion," a group of about 750 former fighters from the Mahdi Army, a group loyal to radical cleric Muqtada al-Sadr that once fought fierce battles with U.S. and Iraqi forces.

On a recent patrol, an American sergeant first class chatted amiably with the shrine guards, but local American and Iraqi commanders are skeptical, to say the least, that the guards have been reformed.

"Some of them are bad guys," said Brig. Gen. Dhafir Abd Radi, who commands National Police forces in Khadamiyah and is spearheading a controversial effort to seal off the district with concrete blast walls.

Radi has experience with the Mahdi Army. He was part of the "Knights Charge," a bloody battle in Basra in March 2008, when Iraqi security forces routed militia members who had taken control of much of the southern city.

For their part, the shrine guards say they are simply trying to protect the holy site, which has not been attacked, unlike a similar site in Samarra that was bombed in 2006, helping to spark Iraq&#8217;s brutal sectarian battles. Of Abadi, who is wanted on terrorism charges, they say they look up to him and would not stand for his arrest.

Indeed, in November, an elite Iraqi special forces unit attempted to arrest Abadi at his home near the shrine. Shrine guards came to his defense and ended up in a shootout with the soldiers. No one was killed in the melee, but Abadi escaped and now keeps a low profile, though he still clearly has great influence over his men.

"Some people hate him and don&#8217;t like him and try to destroy his reputation ... but it&#8217;s just rumors," said guard Dargam Nejem, who predicted the guards would be able to peacefully negotiate with the government if the authorities ever tried to arrest Abadi again.

Circumstances surrounding a twin bombing near the mosque on April 24 that killed dozens of people have both American and Iraqi security officials concerned about infiltration of the guards. A soon-to-be-opened joint operation center will include U.S. soldiers, Iraqi army troops, and the national and local police, but, notably, will exclude the Shrine Battalion.

"As we know from our investigation, al-Qaida is behind the explosions. But how they entered &#8212; somebody from the inside let them," Radi said.

Now Radi wants to send the guards to training at Iraq&#8217;s National Police academy, and he makes no secret of his plan to use the training in part to vet the battalion.

All of this intrigue and rivalry requires U.S. forces in the area to tread gingerly. For the most part, they stay in the background.

Lying at the heart of this disjointed security apparatus, of course, is the shrine &#8212; a sacred monument that is expected to draw upwards of 10 million Shiite pilgrims for several days in mid-July to commemorate the death of Imam Musa ibn Jafar al-Kadhim, who is buried there. The stakes for keeping the disparate factions working together are enormous. One well-placed bomb at the mosque could send this fragile country back to its dark days of bloody sectarian conflict.

Talking about the grim possibilities, Radi points at his weathered, weary face.