28th Infantry Division soldiers serving with Stabilization Force protect a police station against "rioters" during October&#39;s non-lethal weapons training on Eagle Base. The troops were trained to assist the local police in controlling potential riots. The soldiers are now scheduled for peacekeeping duties in Kosovo. (Ivana Avramovic / S&S)

28th Infantry Division soldiers serving with Stabilization Force protect a police station against "rioters" during October&#39;s non-lethal weapons training on Eagle Base. The troops were trained to assist the local police in controlling potential riots. The soldiers are now scheduled for peacekeeping duties in Kosovo. (Ivana Avramovic / S&S) 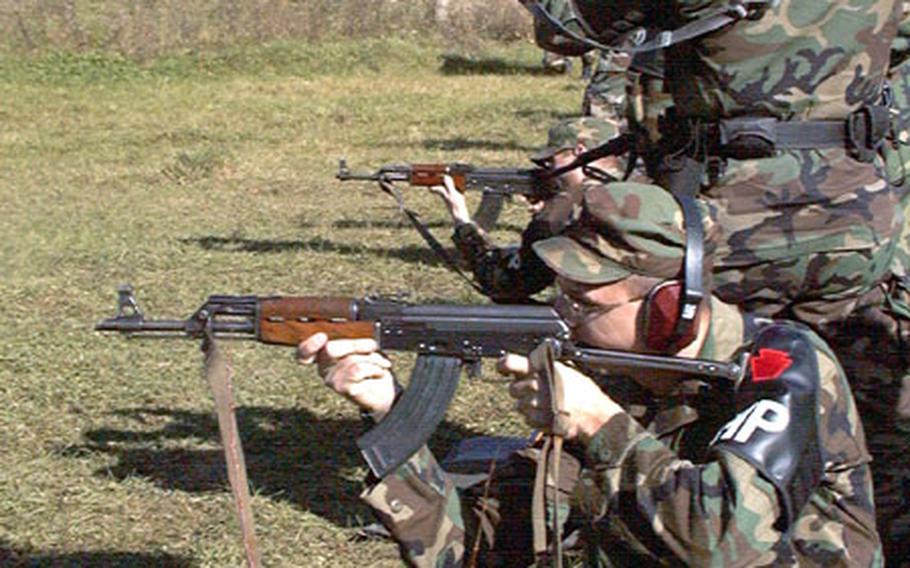 Staff Sgt. Scott Haymaker of the 28th Military Police Company under the 28th Infantry Division of the Pennsylvania National Guard and his unit members shoot AK-47s at a firing range in Tuzla, Bosnia and Herzegovina, outside Eagle Base during a joint training with the Tuzla Police Support Unit in November. (Ivana Avramovic / S&S)

EAGLE BASE, Bosnia and Herzegovina &#8212; As if Pennsylvania National Guard troops were not already doing enough, the Army has tapped them for duty in Kosovo, now that the 1st Cavalry Division has been removed from the scheduled rotations so it is available for a possible war against Iraq.

In addition, the Army&#8217;s Germany-based 1st Infantry Division soldiers may have to stay in Kosovo a little bit longer until all troop assignments are decided.

Within a year of being deployed to provide security at U.S. installations in Europe and to maintain a peacekeeping rotation in Bosnia and Herzegovina, some 1,110 members of the 28th Infantry Division of the Pennsylvania National Guard are being activated for a tour in Kosovo.

During a Jan. 10 interview, Craig denied plans to send any of the 28th ID to Kosovo, and said Pennsylvania troops were not on alert for deployment to the Yugoslav province.

Yet, just a week later, a press release from the state of Pennsylvania identified 1,100 troops from 25 units from Craig&#8217;s command for duty in Kosovo.

The 1st Cavalry is slated to take part in Victory Scrimmage, a classified war planning exercise that includes both U.S. and European divisions in Grafenw&#246;hr in late January.

It has not been determined when the Keystone soldiers will replace the 1st ID troops who were supposed to stay in Kosovo until May. As of last week there are no plans to keep the 1st ID there beyond May.

The Army has not released what other units will complement the 1,100 Keystone troops to replace some 3,000 1st ID troops currently there.

In the past, units would train for more than 18 months before deploying for peacekeeping in the Balkans.

The deployments to Europe and Bosnia already make the Keystone National Guard the most deployed guard in the States with 3,800 soldiers away from home.

About 1,900 troops under Task Force Keystone will rotate back to Pennsylvania after six months of guard duty on bases in Europe. Another 1,100 serve in Bosnia.

This will be the first time a National Guard unit has had the command and a significant presence in Serbia&#8217;s disputed region.

It does not come as a surprise to Maj. Shaun Jones of Headquarters and Headquarters Company, 28th Infantry Division, who is considering volunteering for the Kosovo deployment, that the Pennsylvania National Guard was called on again.

&#8220;I understand that we are prepared for the mission through all the training through all the years,&#8221; Jones said. &#8220;This is what we train for all the time we are training. Now you have an opportunity to participate.&#8221;

Jones said he has to take into account his family and loved ones and being away from the civilian job as a state trooper in Pennsylvania before he makes his decision.

&#8220;We have to do what we have to do to keep the peacekeeping mission going,&#8221; said Sgt. Kwan Martin of Company A, 1st Battalion, 109th Infantry Regiment. He plans to return to his family after the Bosnia deployment ends in a couple of months.

Both Jones and Martin consider the Bosnia deployment an advantage for deploying to Kosovo.