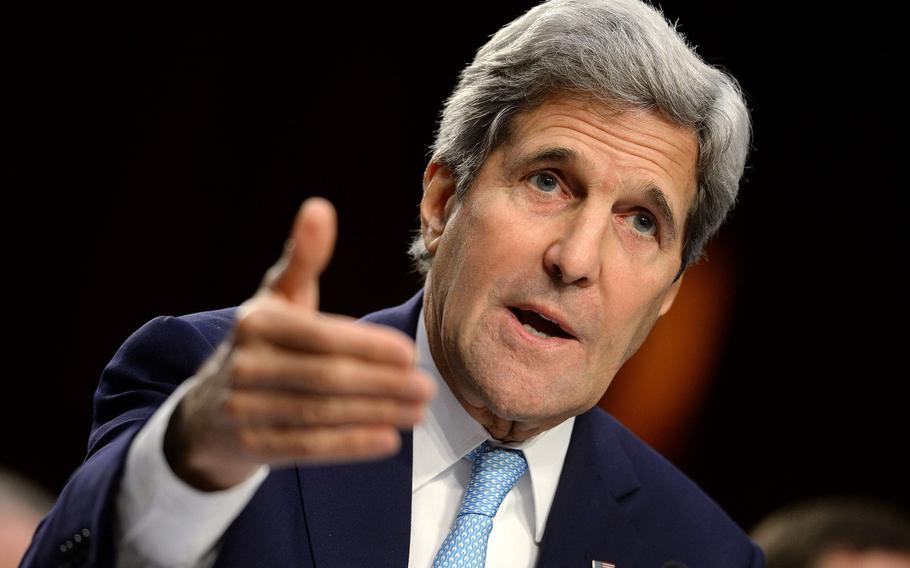 WASHINGTON — Secretary of State John Kerry said Tuesday that the Senate should not “bind the hands” of the president with a new war authorization that bars ground troops.

Kerry delivered the message to lawmakers as part of the Obama administration’s first detailed request for legislation setting the scope of military force used against the Islamic State in Iraq and Syria. He also asked that lawmakers allow targeting groups “associated” with the extremists and not limit operations geographically to those two countries.

The Senate Foreign Relations Committee is weighing a war authorization after months of U.S. airstrikes, and amid growing concerns that lawmakers are obligated to take a stronger stand on the future of operations. The committee will on Thursday debate a bill that limits the war to three years and bars the use of ground forces.

Kerry told the committee that President Barack Obama is open to language in an authorization that clarifies how combat forces may be used and still does not plan to deploy ground troops.

“It does not mean we should pre-emptively bind the hands of the commander-in-chief or our commanders in the field in responding to scenarios and contingencies that are impossible to foresee,” Kerry said.

It was the latest indication by a top administration official that a ground war may still be on the table in Iraq, despite repeated assurances from the president that he will not lead the country into such a conflict again. Obama pulled troops from Iraq in 2011 after the U.S. military fought a bloody insurgency for 8 years.

Kerry said the administration hopes to build a consensus in Congress leading to support in both the House and Senate. It has claimed it can legally wage the current campaign of coalition airstrikes and support of local allies under authorizations against al-Qaida and Saddam Hussein passed by Congress over a decade ago but that those laws should be updated.

Sen. Robert Menendez, D-N.J., Foreign Relations chairman, drafted the Senate authorization proposal that blocks the use of ground combat operations except for protecting or rescuing U.S. personnel, or gathering intelligence. It would allow spotters to direct airstrikes.

“In my view, the deployment of ground troops would be Groundhog Day in Iraq all over again,” he said.

The bill also limits operations to three years, requiring the next administration to return to Congress for further authorization, and mandates reports on progress every 60 days, Menendez said.

“I know some will see this as limited, but at the end of the day Americans will not support an authorization for endless war,” he said.

The legislation may be voted out of the Senate committee later in the week but will almost certainly not pass into law before Congress ends its session in the coming days.

An authorization could be taken up again in January when it will be subject to more GOP influence. The party takes majority control in both the House and Senate and some Republicans have called for an increase role for the military.

Sen. Marco Rubio, R-Fla., said he opposes the bill because it attempts to “micromanage” military tactics and “telegraphs” the U.S. strategy to the Islamic State.

“I think it takes a lot of the advantage away from our engagement,” Rubio said.