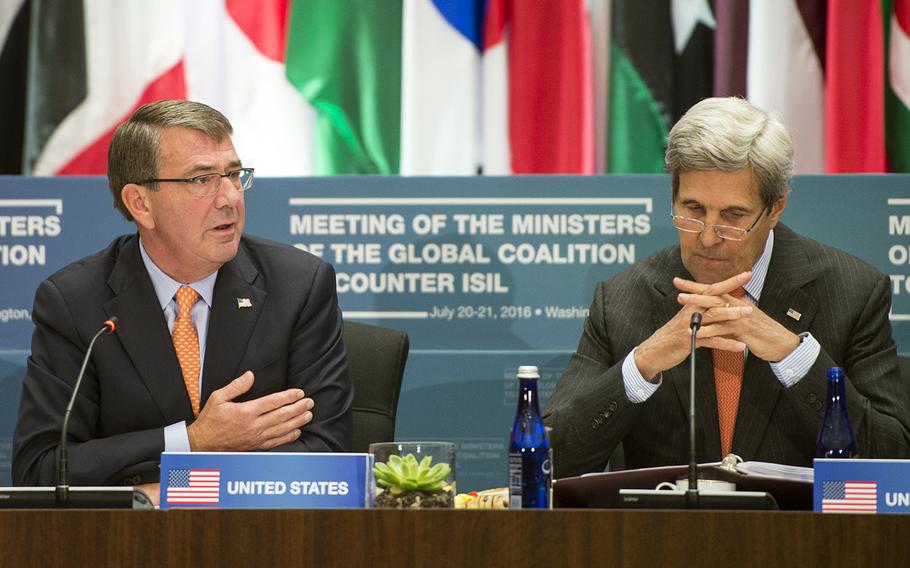 Secretary of Defense Ash Carter, sitting next to Secretary of State John Kerry, address ministers of defense during the Global Coalition to Counter ISIL in Washington, July 21, 2016. (Brigitte N. Brantley/DOD)

Local forces in Iraq and Syria backed by the U.S.-led Operation Inherent Resolve coalition have taken control of massive amounts of the land captured two years ago by the Islamic State group. They are now closing in on the terrorist group’s key strongholds of Mosul in Iraq and Raqqa inSyria.

But Kerry on Thursday urged his colleagues from more than 30 coalition nations to commit to the larger goal of ending the Islamic State threat beyond Iraq and Syria, where the group rose to prominence.

“Today, we can look forward, without exaggeration, to a time when [the Islamic State group] is driven completely out of Iraq and Syria,” Kerry said at the State Department in Washington, D.C. during the second day of a summit of top coalition leaders. “The day that happens will mark a critical turning point in the fight against [the group], but everyone here knows that [the Islamic State group] is still going to be dangerous.”

As Islamic State fighters continue to cede ground to coalition-backed local forces, the group has recommitted itself to its terrorism roots, transforming “into some kind of global network whose only real goal it to kill as many people as it can in as many places as possible,” Kerry said.

Committing to sharing more intelligence about suspected terrorists among partner nations couldhelp stop Islamic State group members from attacking countries across the globe, the secretary said. The United States has these kinds of information-sharing agreements with 55 nations and at least 50 countries provide Interpol with profiles of terrorists.

But there are nearly 70 nations in the Operations Inherent Resolve coalition. More so, attacks directed or inspired by the Islamic State group have occurred in nearly every part of the world. Better information about the individuals who committed such acts, Kerry said, might have stopped them.

“Looking to the future, we have to keep breaking down the structural and the bureaucratic barriers in order to be able to exchange up-to-date information more quickly and more widely, so that a border guard in southern Europe has the same data about a terrorist suspect as an airport security officer in Manilla or an FBI agent in Boston,” he said.

The coalition also must agree to “wage a holistic campaign against the root causes of violent extremism,” Kerry said.

Since the terrorist organization proclaimed itself a worldwide caliphate in 2014, it has flooded the Internet with its pro-Islamic State group material. Today, for the first time in two years, there is more material online to counter the militant group’s messages than supporting them, Kerry said.

Coalition partners also must do more to assist individuals who could be vulnerable to extremism by helping them gain access to education and work, the secretary added.

In Iraq, Kerry said the efforts have begun, but Mosul will pose the largest challenge to date. More than one million civilians are in the Islamic State group-held city, and the coalition and other organizations, including the United Nations, are already preparing for a massive humanitarian and rebuilding effort.

On Wednesday, coalition nations pledged more than $2.1 billion for the efforts, Kerry said. In addition to humanitarian aid, the money will be used for the immediate stabilization efforts once the militants are driven from Mosul, the operations to remove explosives and long-term recovery assistance.

The preparations for the operations must be in place before the military siege on Mosul begins, Defense Secretary Ash Carter said Thursday. Quickly restoring Mosul to its own people will be critical in ensuring it does not again become a breeding ground for extremism, he said.

“We cannot allow the coalition’s stabilization and governance efforts to lag behind our military progress,” Carter said. “That was one of the biggest strategic concerns voiced at [Wednesday’s]defense ministerial … such progress is critical to ensuring that (the Islamic State group) once defeated, stays defeated.”