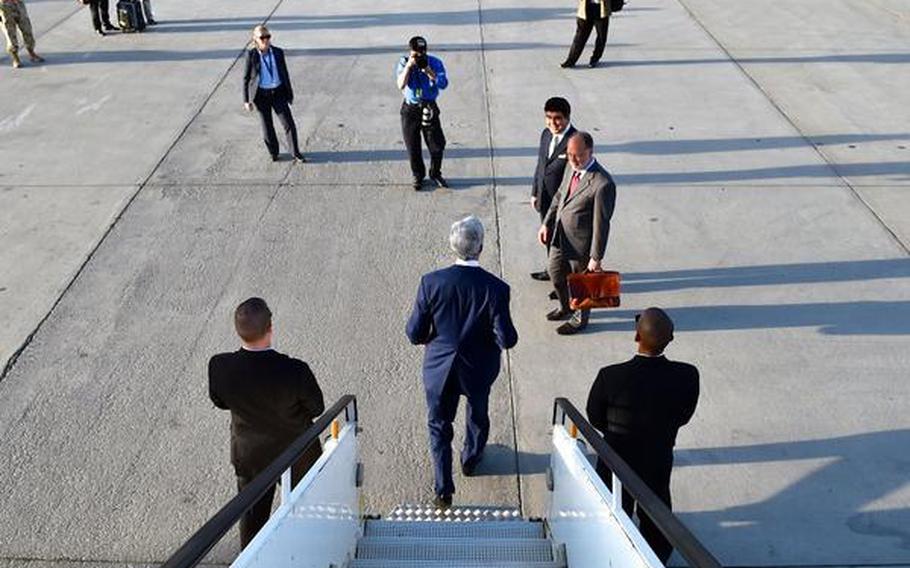 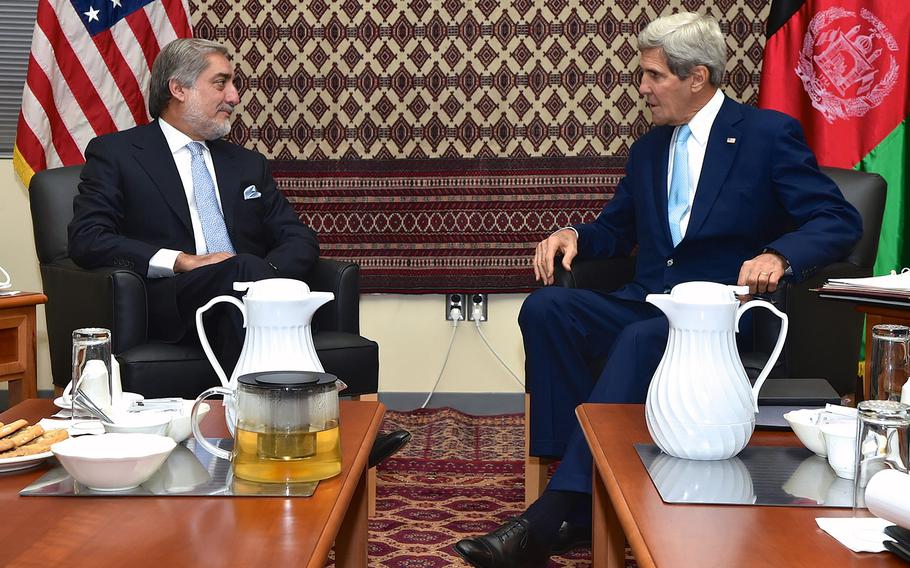 U.S. Secretary of State John Kerry sits with Afghan presidential candidate Abdullah Abdullah in Kabul on August 7, 2014, before a meeting about the ongoing recount of the presidential election vote between Abdullah and rival candidate Ashraf Ghani. (State Department ) 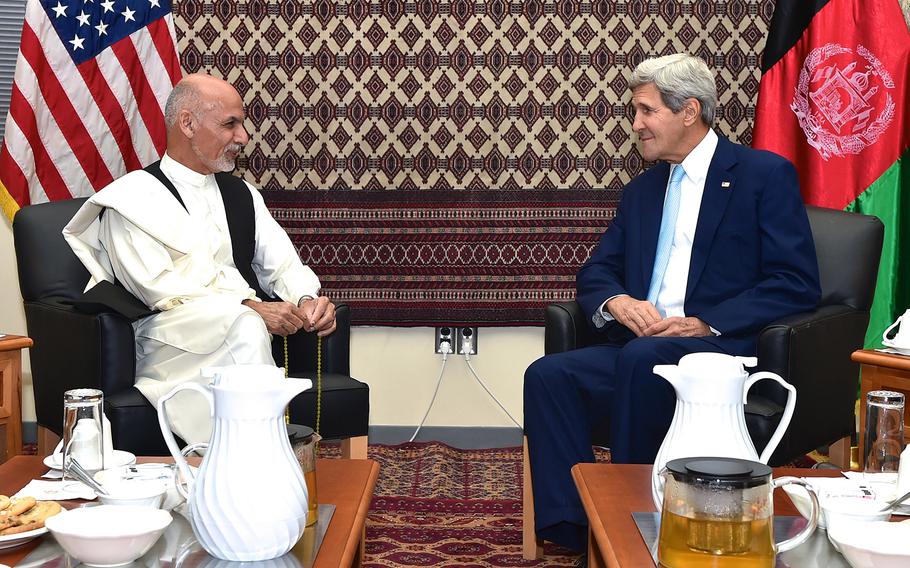 U.S. Secretary of State John Kerry sits with then-Afghan presidential candidate Ashraf Ghani in Kabul on August 7, 2014, before a meeting about the ongoing recount of the presidential election vote between Ghani and rival candidate Abdullah Abdullah. Ghani was elected president. (State Department)

KABUL — Secretary of State John Kerry arrived here Thursday to urge progress on a power-sharing agreement between the country’s two presidential contenders, even as the Afghan government and international observers continue to review election results to determine a winner.

Kerry met with candidates Abdullah Abdullah and Ashraf Ghani separately to encourage them to accelerate the vote audit and push toward a political agreement, according to the U.S. Embassy in Kabul. He met separately with President Hamid Karzai and also spoke with the head of the UN mission overseeing the vote audit, Jan Kubis. on Friday, Kerry will sit down with both candidates together, according to an AP report.

The secretary has said he would like both the recount and the power-sharing agreement finalized by the end of the month. That timeline would accord with a NATO summit meeting in September in Wales, where Afghanistan will be a major issue.

The military coalition plans to pull all combat troops from the country by the end of the year.

Kerry brokered an agreement between the two camps in July after allegations of corruption by Abdullah, who in a June runoff finished second to Ghani by roughly a million votes. Part of the agreement was the review of every vote cast in the runoff, a process that continued this week despite a shaky start and confusion over the criteria for invalidating ballots.

The agreement also called for the formation of a so-called national unity government involving the losing candidate. Under the deal, the candidate who loses the runoff would be allowed to pick an individual to serve in a “chief executive” position. That individual, whose powers have yet to be enumerated, would report to the president and could be removed only by a decision of the Loya Jirga — a traditional assembly of tribal leaders from across the country — called by the president.

Such a division of power would be a first in Afghanistan, which is divided along ethnic lines and has traditionally seen power concentrated in a single individual. Ghani’s campaign, which is believed to draw more support from the country’s Pashtun majority, originally said it would delay talks on a unity government until after the election review was finished. Abdullah’s campaign, which pushed for the new government structure, has charged that Ghani wasn’t acting in good faith on the agreement by delaying the discussions.

As the election review continues, both sides have met in recent days to discuss the power-sharing framework, according to the U.S. official. Kerry’s visit is meant to check the progress of those talks, said the official, who did not have permission to speak to the media and asked not to be named.

The visit underlines U.S. urgency for a resolution to the dispute and a peaceful transition of power as the country fights an entrenched insurgency and suffers from a stunted economy after decades of war.

The vote recount, beset by delays as the two sides fight over rules and trade accusations, appears to have picked up pace in the past few days. The U.S. Embassy in Kabul said Thursday that election reviewers have investigated 18 percent of the 22,828 ballot boxes used in the election, including those from Kabul, Kandahar, Logar and Paktika provinces. All of the boxes had been delivered to examiners by Tuesday, according to the embassy.

Kerry’s trip comes days after an Army major general was slain by an Afghan gunman during a visit to a training base in Kabul. Maj. Gen. Harold J. Greene was the highest-ranking officer killed in an enemy attack overseas since the Vietnam War. The attack also wounded more than a dozen NATO troops, including a German general, and Afghan military officials.

The NATO military coalition repeated Thursday that it couldn’t release further details on the attack because of an ongoing investigation. News reports citing coalition officials have said the attacker was an Afghan soldier who hid and waited for the visiting delegation and fired his automatic weapon from a distance.

Zubair Babarkarkhail contributed to this report.