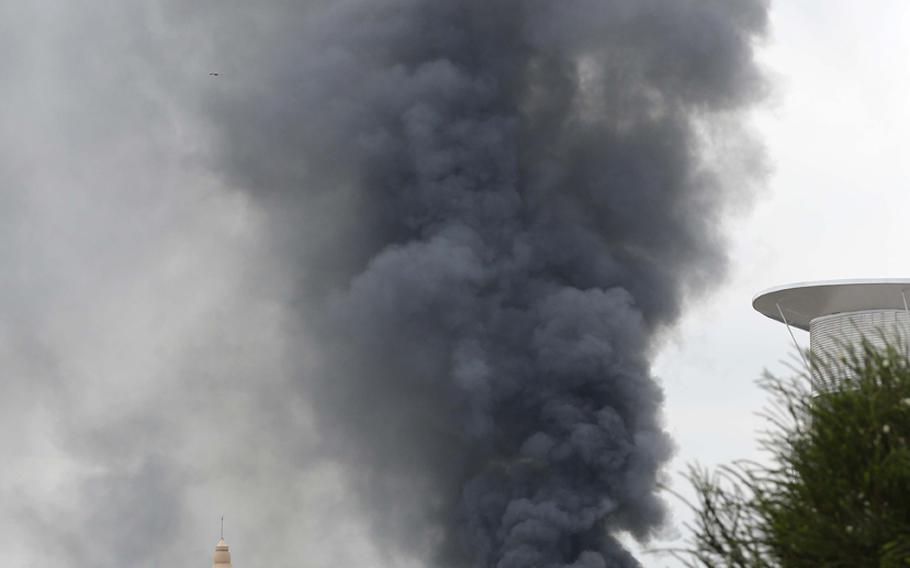 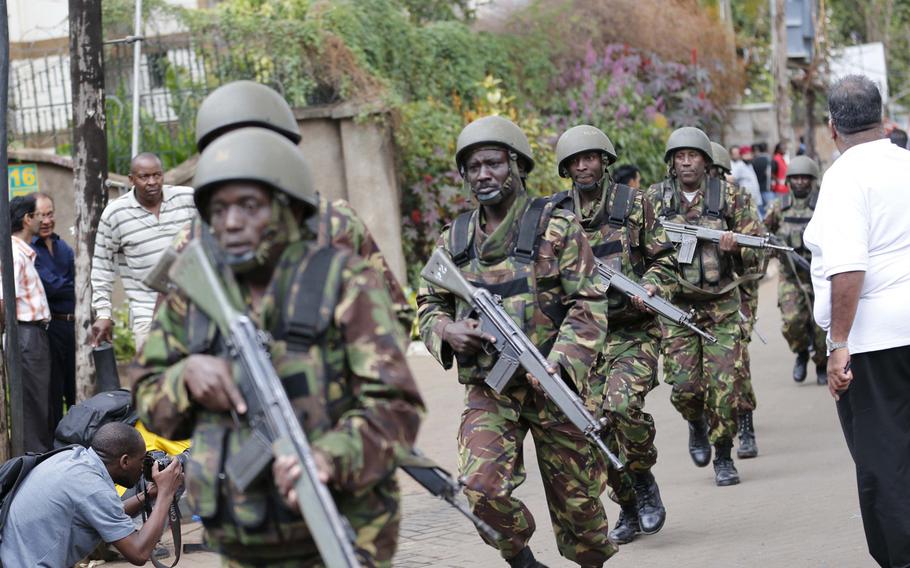 Soldiers arrive at Westgate Mall on Saturday, September 21, 2013, in Nairobi, Kenya. A gun battle inside the shopping centre left several people dead after gunmen attacked one of the city's most exclusive malls. (Zhang Chen, Xinhua via Zuma Press/MCT)

An audacious attack in a busy Nairobi shopping mall by gunmen who slaughtered scores of people then held off security forces for days has brought renewed attention to Al-Shabab, an Islamist group that African Union troops have battled in Somalia for years.

Whether the attack signals a resurgence of the al-Qaida-affiliated group or a change in tactics by a weakened, splintered organization remains an open question.

“The attack is probably just the first of what is likely to be several from al-Shabab now that it has transitioned from a guerrilla force into a full-fledged terrorist outfit, with its hardliners having consolidated their control over the remnant of the organization,” said J. Peter Pham, director of the Atlantic Council’s Africa Center.

Al-Shabab, which in Arabic means “the youth” has taken credit for the attack at the mall, favored by wealthy Kenyans and ex-pats, killing at least 62 people, including British, Canadian, French, Indian, Ghanian and Chinese citizens. More than 170 people were injured.

The attack began Saturday. By Tuesday, Kenyan security forces were still struggling to end the four-day siege and there were no answers to questions about hostages’ fates or that of the attackers.

The Shabab, along with the Nigerian-based militant group Boko Haram in western Africa and al-Qaida in the Islamic Magreb, which operates across the Sahel, have long been a source of concern for U.S. counter-terrorism officials. So far, none of the groups has demonstrated a capability to launch attacks in the West. But they do pose a threat to U.S. interests in the region.

Analysts say Al-Shabab has been split in its political goals of imposing harsh Sharia law only throughout Somalia — where they have stoned teen-aged girls to death, amputated thieves’ hands and thwarted international aid projects — or worldwide jihad.

The group has said the attack was revenge for Kenya sending thousands of its troops across the border into Somalia in 2011.

In 2010, insurgents from the militant group exploded bombs at separate locations in the Ugandan capital of Kampala, killing scores of soccer fans watching a broadcast of the World Cup. More than 70 people were killed in those strikes, which were retribution for Uganda’s support of an African Union military mission in Somalia that has greatly weakened Shabab.

The Kenyan, Ugandan and other troops comprising the African Union Mission for Somalia – AMISOM – quickly pushed the Shabab out of Mogadishu and other cities. AMISOM is backed by the United Nations, and partially trained and equipped by U.S. forces. Its success was lauded by U.S. officials.

“The strides and progress made in Somalia are huge,” Maj. Gen. David Hogg, then commander of U.S. Army Africa, told a group of newly trained Sierra Leone troops last year.

“In Mogadishu, people are able to go to the market without getting killed because of what AMISOM has done… You will join the Kenyan forces in southern Somalia to continue to push Al Shabab and other miscreants from Somalia so it can be free of tyranny and terrorism and all the evil that comes with it,” Hogg told the soldiers.

But the Shabab fighting force — estimated by a U.N. monitoring group at about 5,000 — remained in the countryside, apparently gaining momentum for terrorist attacks.

“Coupled with the successful July 13, 2010, al-Shabab attack in Kampala, Uganda, these incidents prove the group is capable of operating effectively outside of Somali borders, and sets an operational precedent for future—now current—cross-border operations,” stated an analysis by the Soufan Group — the New York-based firm led by former FBI al-Qaida interrogator Ali Soufan.

Pham said U.S. military and diplomatic officials have exaggerated claims of the Shabab’s demise and the sustainability of AMISOM gains.

“This weekend’s attack on the Westgate Mall is an example of the deadly toll exacted by premature proclamations of ‘victory,’ which result in the failure to devote adequate resources to actually truly finishing the task, to say nothing of letting one’s guard down,” he said.

Pham also said U.S. security officials should be concerned about Shabab’s potential reach into the U.S., where it has recruited residents, many of them young Somali-Americans living in Minneapolis.

“It has a reach into America that needs to be a concern for intelligence and law enforcement,” Pham said.

Kenya’s foreign minister told PBS that “two or three Americans” were believed to be among the attackers.

Kenya is an important and longstanding American partner, its security forces working closely with Western counterparts to contain Islamist militants in the region. Considered unusually prosperous and stable, it is an important base for Western embassies and businesses.

The Shabab had been threatening to attack Kenya for two years and has previously attacked churches in eastern Kenya, mosques in Nairobi and government outposts along the Kenya-Somalia border.

But the mall attack was the worst terrorist attack in Kenya since 1998 when Al-Qaida bombed the U.S. Embassy killing more than 200 people.

Still, it is unlikely to spark an overhaul in U.S. policy in the region. Drone strikes have killed some of the group’s leaders, but the U.S.’ strategy in Somalia has been largely focused on training and equipping African forces.

“… Africa’s security is the responsibility of the Africans themselves and it is vital that the United States and other partners maintain supporting roles,” Don Yamamoto, a deputy assistant secretary of state for African affairs, told the House Foreign Affairs Committee in April 2012.

“We will help them stave off legitimate terrorists but will avoid the trap of ‘Americanizing’ or ‘westernizing’ these counterterrorism fights, and thereby prevent extremists from bolstering their own legitimacy by attempting to draw us into the conflict,” Yamamoto said.

Whether the high-profile attack draws new recruits and gains for the Shabab, or draws more resources to attempt to crush it, also remains unknown.

According to the Soufan Group, the New York-based firm led by former FBI al-Qaida interrogator Ali Soufan, “…al-Shabab may have bitten off more than it can chew.”