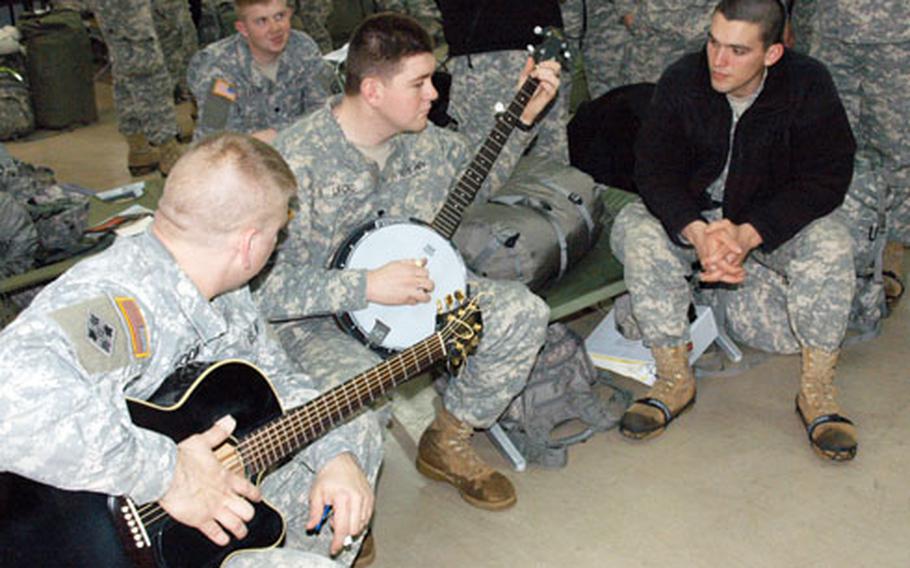 Col. Scott Campbell said his unit has been notified but won&#8217;t hear about a specific mission or destination until roughly a year out.

There&#8217;s speculation it may be headed to Afghanistan, where a buildup of U.S. troops is expected as President Barack Obama moves ahead with his plan to draw down nearly two-thirds of American forces in Iraq by August 2010.

About 300 soldiers from the brigade&#8217;s 1st Battalion, 149th Infantry Regiment are here this week for North Wind, a field exercise being conducted alongside 700 troops from Japan&#8217;s northern army near Camp Makomanai on Hokkaido.

The Kentucky Guard&#8217;s maneuver enhancement brigade carries more than 2,300 soldiers &#8212; and 80 percent have served in a war zone, he added. Most have been downrange at least twice.

"We&#8217;re an infinitely more professional force since 9/11," Abell said. "We have soldiers who are no longer apprehensive about war."

Campbell, a 28-year veteran of the Guard, says he never deployed until 2003.

The Guard&#8217;s transformation from a "strategic reserve to an operational reserve was significant," he added.

"It was a Cold War formation, but you can&#8217;t plan the way you did back then," he said. "You&#8217;re not going to see the threat coming today. Our biggest change is the enhanced readiness. Brigades no longer have weeks or months before they&#8217;re called to the fight. You might have to go within 96 hours."

The increased operations tempo has been challenging, Campbell conceded.

Tokyo has donated millions of dollars in aid to Afghanistan since the fall of the Taliban in late 2001. But media outlets have reported Japan is considering sending troops to the war-torn country on a reconstruction mission.

"That&#8217;s a decision for the government of Japan. Our job is to execute the missions we&#8217;re given," he said through a translator. "Whether we go to Afghanistan or not is not something I can answer. ... Operations in the defense of Japan are first and foremost."

A lot of snow

Snowfall isn&#8217;t uncommon around Kentucky in the winter, but it pales by comparison to the whopping drifts that greeted the 1-149 Infantry Battalion&#8217;s arrival in Sapporo, which, of course, is home to a world-famous snow festival each February.

Staff Sgt. Tony Duncan, the scout platoon sergeant, said he&#8217;s "amazed" by how much snow is on the ground.

"Japan is totally different than what I thought it would be," said Duncan, 38, of Somerset, Ky. "It resembles one of the mountain states. If I was just driving through, not paying attention to the signs, I&#8217;d think I was in Montana."

First time outside the U.S.

Last Saturday, the group left Lexington, Ky., for Minneapolis and then made two stops in Alaska before landing at Narita International Airport. Then came the flight to Hokkaido, followed by an hourlong bus ride to Camp Makomanai on Sunday night.

For Pfc. Chris Sons, 20, a sniper, it marked his first trip ever outside the continental United States.

"You never know where you&#8217;re gonna be fighting at. ... Anything can happen. Hopefully, I&#8217;ll be ready," Sons said. "In some parts of Afghanistan, the climate is very, very cold. This will help out a whole lot."

A banjo on his knee

Apparently, Spc. Joseph Liford showed up at North Wind earlier this week with the famed instrument as well. Apparently, he just couldn&#8217;t leave Kentucky without it.

Late Monday afternoon, as U.S. and Japanese troops spent a final night at Camp Makomanai before heading off to live in tents for a week, Liford broke out the banjo for an impromptu jam session &#8212; bluegrass-style.

"What kind of music is this?" asked Sgt. 1st Class Kenichi Tanaka, among about two dozen Japanese troops who quickly gathered around.

After a half-hour of listening, he answered his own question before leaving with a small group of Japanese troops.