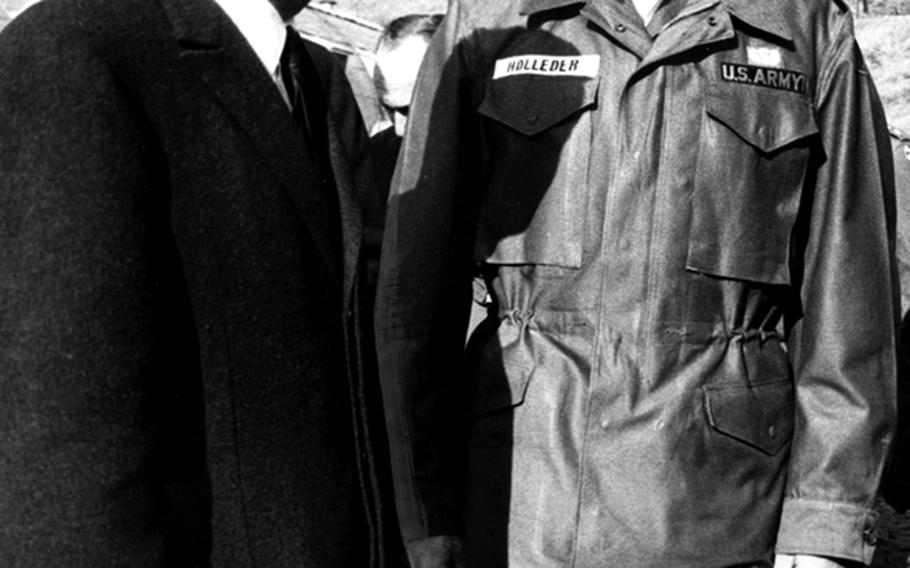 Attorney General Robert F. Kennedy talks with Capt. Don Holleder, a former West Point football star, during a visit to South Korea in January, 1964. Holleder was killed by a sniper in 1967. On Friday, he was posthumously awarded the Distinguished Service Cross, the second-highest combat award. (Steve Stibbens/Stars and Stripes)

ALONG THE DMZ. IN KOREA &mdash; His hair is greying slightly on the sides and his eyes seem weary &mdash; but that familiar Kennedy Charm is still here.

Robert F. Kennedy, younger brother of the late President, showed Sunday that he still retains most of the youthful vitality common to the Kennedy brothers.

He climbed hill after frozen hill to shake hands and chat with American soldiers standing lonely guard duty in sandbagged hunkers along the. Demilitarized Zone.

As Kennedy and his party neared the top of one particularly steep hill, a puffing escort officer asked the Attorney General if he would like to slow up a bit and take a. breather, Kennedy smiled, glanced hack at his aides and said:

"No, but perhaps some of my Washington colleagues would."

Then he bounded on to the top of the icy ridge.

Several times during his up-and-down tour of the truce line positions, Kennedy broke away from the escorting generals to shake hands with some bewildered private.

At Outpost Mazie, he went out of his way to find and thank three soldiers who had earlier brought him coffee. They were PFC's Charles Rutzer of Nahcotta, Wash., Joe King of Carlesville, Ga., and Francis Conski of Cross Keys, N.Y.

All along the way, Kennedy apologized to those soldiers he found lined up at attention in spotless uniforms and polished boots.

"I'm sure sorry I caused you all this inconvenience," he said. "But I just wanted to meet you and say that we appreciate what you are all doing out here."

At Camp Casey, Kennedy met one of his heroes &mdash; Capt. Don Holleder, a 1954 All-American end at West Point.

Holleder is commander of A Co., 1st Bn., 31st Inf. He coached the 7th Div. Bayonet foothall team to a 14-game undefeated season last year and to the Coconut Bowl championship in Hawaii.

Kennedy and Holleder talked about football plays and "the good old days" back at Army. Kennedy told Holleder to write a note for him to take back to Army's former coach, Earl "Red" Blaik.

The attorney general was made an honorary "Bearcat" &mdash; an unofficial fraternity of the 1st Bn., 31st Inf. He was also given an oil portrait of. his brother which. he said he would hang on the wall in his office.