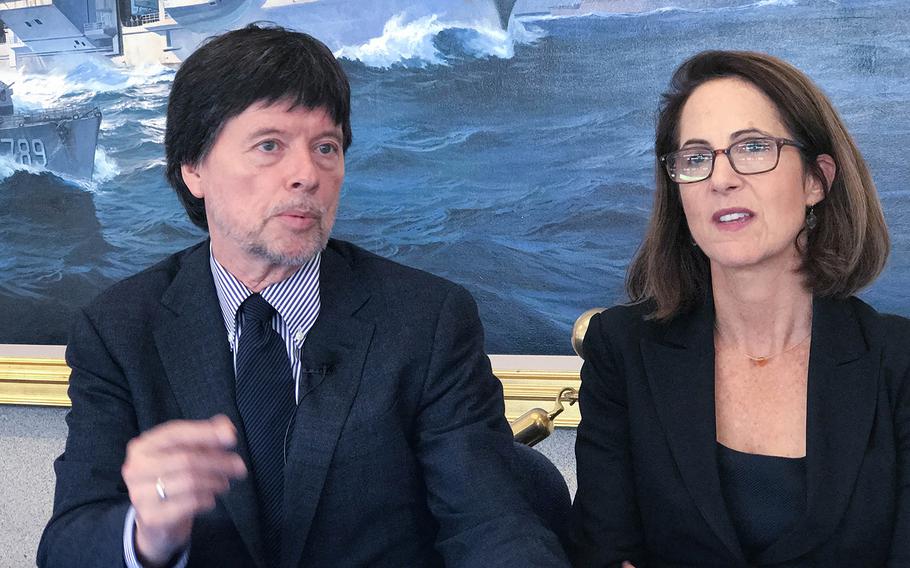 Producers Ken Burns and Lynn Novick discuss the process of making the documentary, "The Vietnam War," on the campus of United States Naval Academy on Wednesday, September 13, 2017. Burns and Novick previewed a snippet of then 10-part documentary to Midshipmen and distinguished at the Annapolis academy. (Ken-Yon Hardy/ Stars and Stripes)

Producers Ken Burns and Lynn Novick discuss the process of making the documentary, "The Vietnam War," on the campus of United States Naval Academy on Wednesday, September 13, 2017. Burns and Novick previewed a snippet of then 10-part documentary to Midshipmen and distinguished at the Annapolis academy. (Ken-Yon Hardy/ Stars and Stripes) "The Vietnam War," documentary producer Ken Burns talks to an audience at the United States Naval Academy about the content of the film. Burns along with producer Lynn Novick showed a 45-minute highlight reel of the documentary on Wednesday, September 13, 2017, to midshipmen and distinguished guests. The 10-part documentary will premier on PBS, Sunday, September 17, 2017. (Ken-Yon Hardy/ Stars and Stripes)

ANNAPOLIS, Md. — The introduction to the epic new documentary by Ken Burns and Lynn Novick on the Vietnam War opens with the rat-tat-tat of a helicopter rotor, then footage of men on the battlefield, fighting, slogging, screaming in pain.

Then these words, spoken by Marine Corps veteran John Musgrave: “Coming home from Vietnam was close to as traumatic as the war itself.”

“For years, no one talked about Vietnam,” Musgrave says. “It was so divisive, like living in a family with an alcoholic father. Shhh — we don’t talk about that.”

But there is a lot to talk about.

“The Vietnam War” turned into an 18-hour, 10-part project that took Burns and Novick a decade to complete. It involved poring through 100,000 photographs, spending thousands of hours with archival footage and recordings, talking to 1,000 witnesses and ultimately, telling stories from 79 perspectives.

“You are going to hear from not just Americans, but also Vietnamese,” Novick said Wednesday when the filmmakers sat down with Stars and Stripes. “We have gotten to know the people who were our enemy back then, and that’s been revelatory for American veterans in the film who’ve seen the other side, who they were fighting, the men they were trying to kill and who were trying to kill them — and women, actually.”

“The Vietnam War” will air on PBS every Sunday through Thursday for the next two weeks, and Mondays through Fridays on American Forces Network, or AFN.

From the start, this production was a journey of discovery.

Burns and Novick have created documentaries about American history — including World War II, the Civil War, Prohibition, jazz and baseball — that have earned Emmy and Peabody awards and Oscar nominations. But they always knew that a project on Vietnam would be their most ambitious. In 2006, they believed the time had come.

Burns said he quickly came to realize that most of what he knew about Vietnam was wrong.

“I grew up during the Vietnam era. I thought I knew something about it. I’d come of age, I read the newspaper, watched the nightly news. I discussed it. I was on a college campus that was a hotbed of opposition to the war,” he said. “I learned very quickly how little I knew and how much I had to learn.”

People have a tendency to reduce historical events to short, superficial headlines, he said.

“With something as complicated as Vietnam, as fraught as Vietnam, as wrenching and tragic — and in some ways people spend a lot of time avoiding the subject — it was really important to sort of draw it all out,” he said. “So I think feeling that original humiliation … permitted me to just discard whatever baggage that I had, as well as preconceptions, and just make as honest a film as possible.”

Weaving so many disparate historical perspectives was complex. The two re-examined the history of the war, the policies and politics from different countries and governments — the U.S., North and South Vietnam — and the experiences of people from all of those places, whether military, civilian, diplomat, guerrilla or spy.

The resulting documentary puts familiar, iconic images from the war into new context — the shooting of a Viet Cong prisoner by a South Vietnamese commander that was photographed and recorded for the nightly news; the young girl, her skin burned by napalm, running naked down a dusty street; the real-time coverage of the Viet Cong assault on the U.S. Embassy in Saigon. It holds revelations, like most North Vietnamese soldiers did not go home for six years; no death notices were given; and families in the north knew nothing of the fates of their sons and daughters until the conflict ended.

“What we wanted in our film was the ability to communicate to you the 30 battles we think you should know, the dynamics of policy decision-making from Washington to Saigon to Hanoi, but also the inner life of 80 individuals that you will come to know like family members — and some of them are the enemy,” Burns said. “Some of them are people that were shooting at us. And it is super important, particularly because we are so desperate to understand the lessons of Vietnam and also desperate to put it behind us, to find some closure — that we understand what they were thinking and what they were feeling and how very similar in some cases they sound to our Marines and our Army and our Navy men.”

For a long stretch, Burns and Novick said they thought they had a terrific introduction for the film. But at some point, they concluded it wasn’t right. They realized that they needed to prepare their audience for all of this new material. They finally settled on an intro that includes North Vietnamese soldier Bao Ninh reflecting on the destruction — “In war, no one wins or loses,” he says — and Musgrave on the long-festering silence.

“It’s only been very recently that I think the baby boomers are finally starting to say, ‘What happened? What happened?’ ” Musgrave says.

That question, Burns said, propels “every one of the minutes of the 10 parts and 18 hours.”