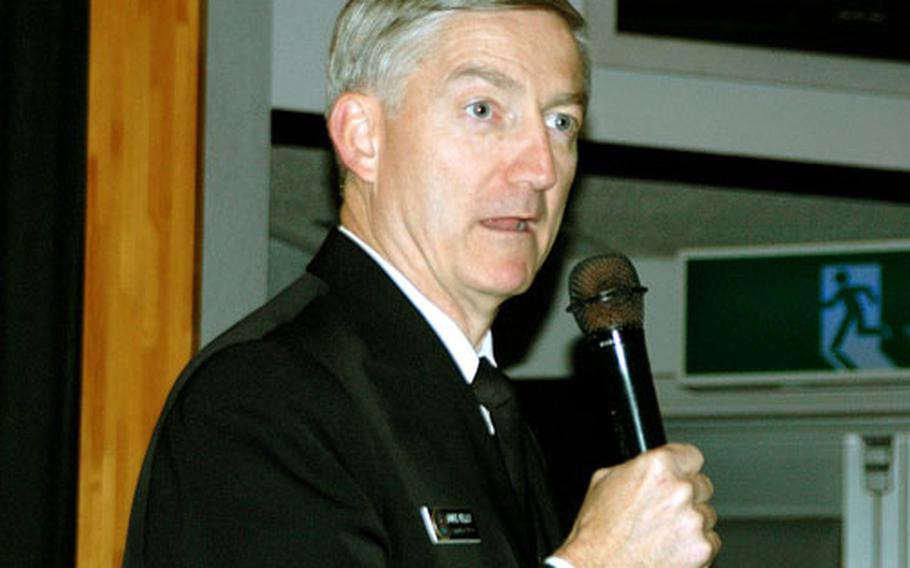 The southern Japan base is closer to the Koreas and China than the other five CNFJ facilities, he said, adding that Sasebo&#8217;s location, its harbor&#8217;s natural safety and the quality of its port facilities make Sasebo a key site.

Kelly held the all-hands call in the Showboat Theater during his first trip to Sasebo since taking command about nine weeks ago.

&#8220;There is more oil, gas and ordnance here than in any other one place in the world. In Sasebo, we guard, provide medical care, places to live, public works, MWR services &#8230; everyone who lives here or might have a need to use our facilities. We do a lot of stuff here,&#8221; he said.

In connection with Sasebo&#8217;s strategic position, he spoke about the volatility of North Korea and the emergence of China&#8217;s navy as a global maritime power or &#8220;blue-water Navy.&#8221;

Of the draft U.S.-Japan agreement to realign U.S. forces in Japan, Kelly said there are &#8220;some big moving pieces&#8221; including transferring Carrier Air Wing 5 from Atsugi Naval Air Facility to Marine Corps Air Station Iwakuni and relocating Marines from Camp Futenma to Camp Schwab in Okinawa.

While visiting Sasebo, Kelly said, he had the opportunity to learn about local &#8220;pieces moving on the checkerboard,&#8221; including ongoing dredging of the Juliet Basin to create more ship berthing spaces and plans to move Assault Craft Unit 5 in coming years from the Sakibe Laydown Facility south to Yokose Fuel Terminal.

Kelly, who also visited with Sasebo city officials, characterized the relationship between the base and local community as good and stressed the need to maintain that relationship.