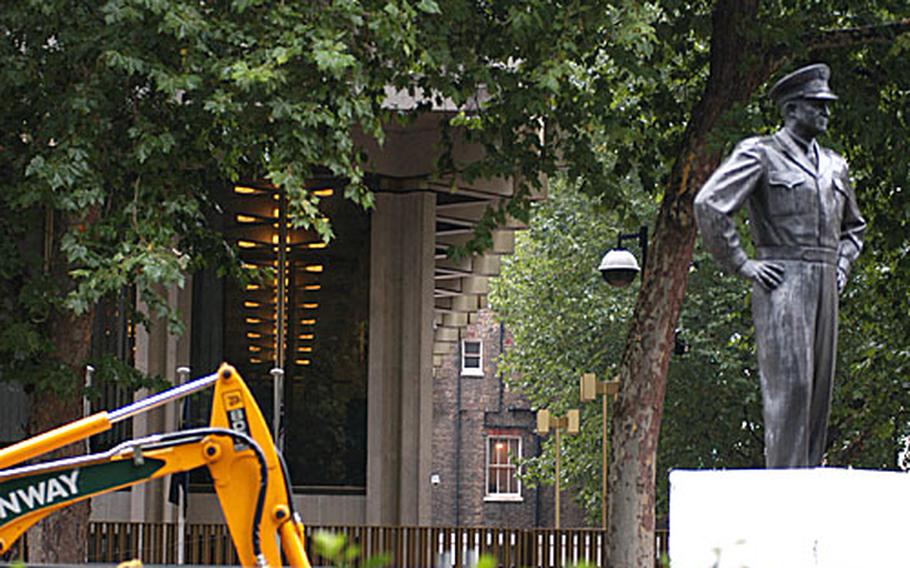 A statue of Gen. Dwight Eisenhower stands watch outside the U.S. Embassy in London as an excavator works on the new security perimeter. (Bryan Mitchell / S&S)

A statue of Gen. Dwight Eisenhower stands watch outside the U.S. Embassy in London as an excavator works on the new security perimeter. (Bryan Mitchell / S&S) 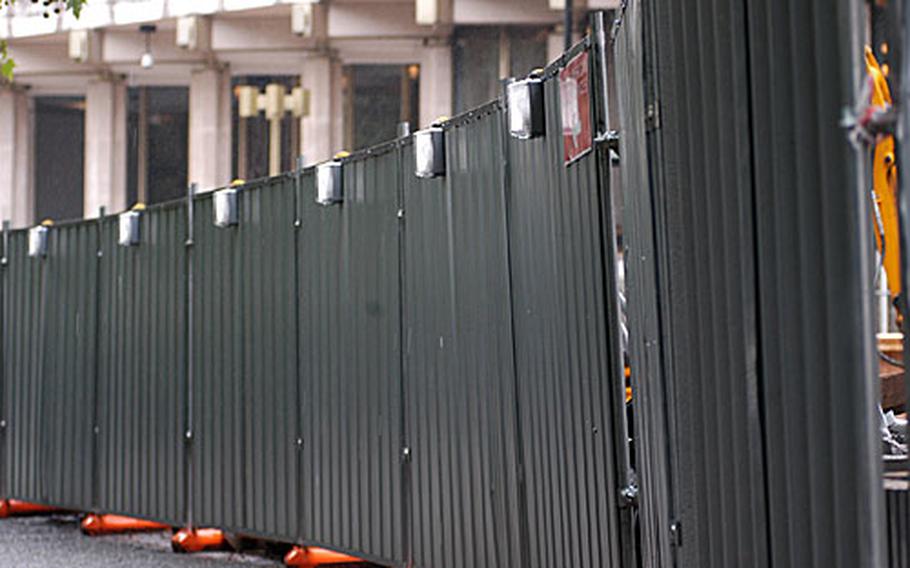 Neighbors complain that some of the barriers that surround the U.S. Embassy in London are ugly. (Bryan Mitchell / S&S)

LONDON &#8212; The U.S. Embassy here is undergoing significant changes to its security perimeter while it weighs the possibility of adding more security enhancements or moving from its complex in the fashionable Mayfair district of Westminster.

Security threats and modernization are driving the changes and the possible move, according to embassy spokesman Dick Custin.

&#8220;The State Department is considering various options that would provide a more modern, secure facility,&#8221; Custin wrote in an e-mail. &#8220;One would be to upgrade the current facilities. Another would be the possible relocation of Embassy London from its current location.&#8221;

The security perimeter is being upgraded after the embassy failed to convince London officials to close two roads that run adjacent to the 240,000-square-foot diplomatic compound.

Instead, retractable bollards are being installed on both Upper Brook and Upper Grosvenor streets that will allow London&#8217;s Metropolitan Police to close the street if necessary, Custin said.

&#8220;The council&#8217;s position has always been that the roads should not be closed,&#8221; said Danny Chalkley, Westminster city councillor for economic development and transport. &#8220;They did want to close the roads, and there was a difference of opinion on that.&#8221;

The upgrades occur against the backdrop of complaints from neighbors about the aesthetics of the current security perimeter &#8212; a combination of sheet metal fencing and concrete blocks.

It&#8217;s in stark contrast to the Italian and Canadian embassies located across Grosvenor Square, which have only a single sentry posted at each door.

Mayfair is one of the capital&#8217;s most exclusive neighborhoods, home to posh restaurants, hotels and boutiques as well as residences that command some of the highest real estate prices in England.

The security upgrades are more robust than those in Madrid and Paris, where State Department officials say extra officers, enhanced surveillance and barricades were put in place following the Sept. 11, 2001, terror attacks. But nothing in those locations is as significant as the fence under construction in London.

Work by contractors from Germany and the United States is under way to build a more attractive $12 million security perimeter. It&#8217;s fashioned after the gold-and-black fence that surrounds Buckingham Palace, less than a mile from the embassy.

Hardline Installation Inc., of Falls Church, Va., and SKE GmbH of Karlstadt, Germany, are slated to complete the project by spring 2008.

Meanwhile, a global real estate advising firm, Cushman & Wakefield, is working to determine if the embassy can be moved from 24 Grosvenor Square.

The embassy declined to disclose how much the firm is being paid. A Cushman & Wakefield spokesman said the firm could not speak about its involvement due to a confidentiality agreement.

The embassy has already refuted false reports it was relocating after the British media mistakenly reported the sale of a U.S. Navy facility next door to the embassy as the sale of the embassy.

Chalkley said the Westminster Council will not factor into the decision.

But local businesses may not be as ambivalent.

The nearby Marriott Hotel regularly hosts embassy functions, and would like to see the embassy remain in Mayfair.

Whatever happens with the embassy, it will be difficult to beat its current lease, which is measured in agricultural denominations: one peppercorn per year.