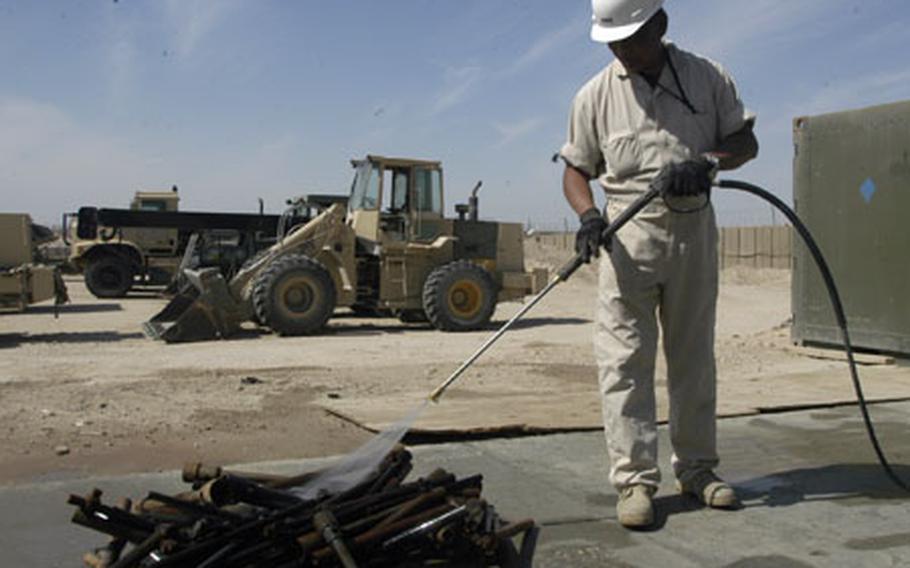 Tucked off a dirt road in this dusty Marine Corps logistical hub sits the &#8220;retrograde lot,&#8221; where thousands of pieces of excess equipment &#8212; everything from weapons and radios to global positioning systems, Humvees and tanks &#8212; are inspected and prepared for transport.

Usually the equipment goes back to the States. But as more Marines are sent to Iraq as part of the Pentagon&#8217;s planned &#8220;surge&#8221; of troops, some of the equipment is being sent to incoming units, said Maj. David Rosenberg, 35, in charge of the Marine Corps Logistics Command Forward-Iraq&#8217;s retrograde lot.

Logistics officer Capt. John Diaz, with 2nd Battalion, 5th Marines, out of Camp Pendleton, Calif. &#8212; one of the &#8220;surge&#8221; battalions coming to Anbar province &#8212; is in Iraq early to inspect the equipment the unit will be inheriting from the retrograde lot.

But with the Corps thinly stretched on equipment, incoming units inherit some of the excess that had been bound for depots in the U.S.

In the States, the gear is overhauled and upgraded for return to the war zone or sent to stateside units to be used for training &#8212; meaning the Marine Corps doesn&#8217;t have to keep buying new equipment, said Gunnery Sgt. Michael Narce, 39, of St. Augustine, Fla.

&#8220;Any way you look at it, it&#8217;s cheaper to fix this gear up than go out and buy brand new stuff,&#8221; said Ed Sloan, 47, an inventory administrator for Honeywell Technical Solutions Inc., which holds the contract to prep the equipment for shipment.

Most of the equipment is returned to Blount Island Marine Corps Logistics Command in Jacksonville, Fla. If complete overhauls are needed, it typically goes to Marine Corps depots in Albany, Ga., or Barstow, Calif., Rosenberg said.

&#8220;As the war progressed and the theater matured, we don&#8217;t need all the equipment we originally came with,&#8221; said Rosenberg, explaining why there is an excess in country.

Rosenberg and Narce, the only two Marines part of the operation, provide quality assurance control to the work performed by the Honeywell employees. Currently, 14 Honeywell contractors work 12-hour shifts, six days a week, a crew down from a high of 39. The main mission is to return the Corps&#8217; excess equipment to troops back home for training, and they&#8217;re depleting the lots, down from 12,000 pieces to about 3,000, Sloan said.