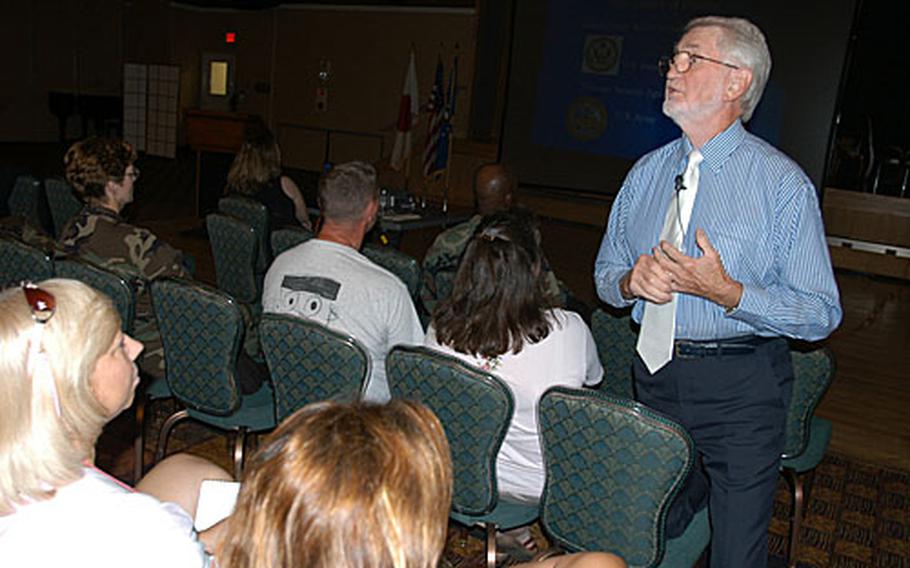 Of all the tricks pedophiles use to lure their victims, most common is seducing a child &#8212; over a period of weeks, months or years &#8212; with love and affection, according to national child-safety expert Kenneth Wooden.

&#8220;From hugging to taking them out to the circus to rewarding them for sex, they target a child starved for affection,&#8221; Wooden said.

Wooden wanted to know &#8220;how,&#8221; so he could educate community members, parents and children about how criminals think.

Wooden offered two workshops Friday afternoon at Misawa &#8212; one for security forces, child-care workers, teachers and other professionals who work with children, and another for parents and children 8 and older.

&#8220;I want them to get educated on how to keep their children safe, regardless of what base they&#8217;re stationed at in the military,&#8221; said Rochelle Phelps of Family Advocacy, which sponsored Wooden&#8217;s visit along with the 35th Medical Group.

Wooden was to give similar presentations this week at Kadena Air Base on Okinawa.

Wooden, 71, who as a teenager was a U.S. soldier stationed in South Korea, spent 25 years as an investigative reporter. A pivotal moment in his career came in the 1970s, while working on an expose on child pornography for the television newsmagazine &#8220;60 Minutes.&#8221;

While researching the story, he discovered a newsletter called &#8220;PIE,&#8221; for pedophile information exchange.

The lure was soap crayons.

So Wooden set out to learn the tactics pedophiles and other sex criminals employ to entrap their victims. He eventually devised a list of the 17 most common lures, which became a key component of his national Child Lures Prevention safety program.

During his research, Wooden would befriend convicts, asking them about their interests. Once they opened up, he&#8217;d ask for the information he wanted, such as: &#8220;How do you target a kid?&#8221;

A pedophile then makes inroads with attention and affection, Wooden said.

Another common lure is assistance, which appeals to the helpful nature of children, he said.

The pet lure is another favorite, according to Wooden. In 1994 in Hamilton Township, N.J., convicted sex offender Jesse Timmendequas lured 7-year-old Megan Kanka into his home by telling her she could see his puppy.

He raped and murdered her, a crime that eventually led to the federal &#8220;Megan&#8217;s Law,&#8221; requiring registration of convicted sex offenders and some form of notification to the public when an offender is present in the community.

Telling children not to talk to strangers doesn&#8217;t work, he said.

How to protect your child

Here are some tips from child-safety expert Kenneth Wooden on keeping children safe from sexual predators:

Avoid scare tactics when discussing personal safety. Reassure your child that most people are kind and safe. Those who are not are the exception.

Instill within your child a sense of self-worth at every opportunity.

Teach your child basic sex education; for example, the areas of the body covered by a bathing suit are private, and nobody should touch those areas.

Establish that sexual abuse is a crime. That gives children the confidence to assert themselves with those who try to abuse them.

Stress that there should be no secrets from you, especially those involving an adult.

Develop strong communication skills with your children. Explain the importance of reporting abuse to you or another trusted adult.

Make a commitment to spend quality time with your child. Lonely and attention-starved youngsters are most vulnerable to abuse.

Make it a priority to get to know your child&#8217;s friends and their families.

Encourage involvement in extracurricular activities. Youngsters with many interests are less likely to become involved with drugs or other negative influences.

Volunteer to chaperone activities such as Boy Scouts and sporting events, especially those involving overnight trips.

Do not rely on &#8220;The Buddy System.&#8221; While it may make children (and parents) feel safer, its effectiveness is questionable. In many instances, sisters, brothers and playmates have been victims of terrible crimes when together.

Instruct children never to go with or get into a car with anyone, unless you have given him or her direct permission.

Above all, encourage children to recognize, trust and follow their instincts &#8212; and listen to your own instincts. If a situation or person makes you or your child uneasy, believe in your feelings and act on them.