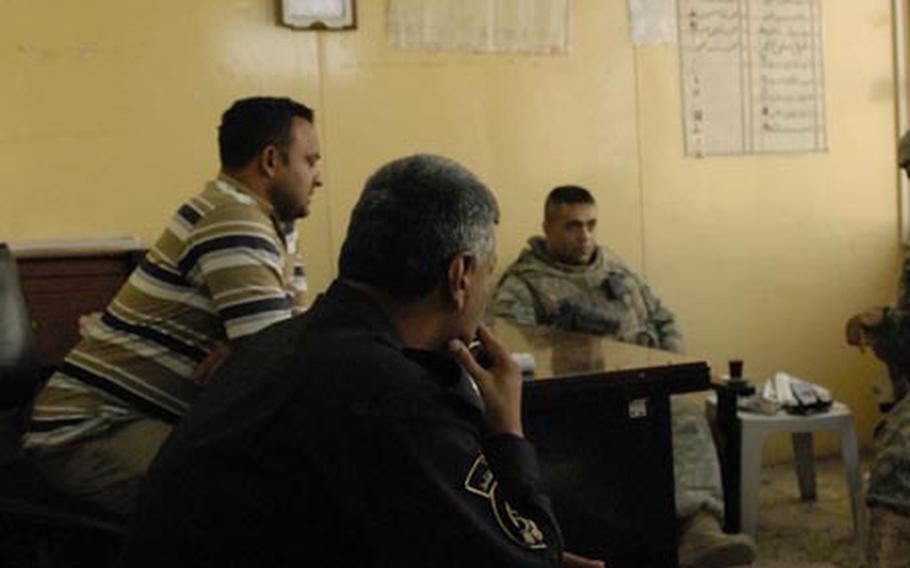 Sgt. 1st Class Carmen Centennial (right) listens as workers at the Abu D’shir gas station talk about recent challenges with workers and customers. Col. Brahim Mihsson Jassim (front), the member of Iraq’s directorate for oil police assigned to the station, said he has worked to cut down on corruption and theft there. (By Leo Shane III / S&S)

BAGHDAD &#8212; While $4 a gallon gas is causing headaches at U.S. stations, Iraqis here are relieved when it only costs them $12 a gallon.

U.S. and Iraqi security forces are working to change that, but admit that it will take time to build local residents&#8217; faith that the new government can stamp out corruption in basic civil services.

The unit, based in the Abu D&#8217;shir neighborhood of the city&#8217;s eastern Rashid District, visits the local government fuel station on a near daily basis, checking that gas pumpers are charging accurate prices and the mandated 50-liter maximum gas allowance isn&#8217;t being skirted.

Tennimon said over the last few months conditions at the station have improved. A new colonel from the directorate for oil police has suspended and fired workers who were extorting locals for extra cash, and done a better job at securing the area around the station from possible attacks by insurgents.

"Before, the manager was just lazy," he said. "These guys are really good."

But the fuel lines out of the station still run for miles up the highway at rush hour, and a recent gas shortage in the region because of a supply problems upset many locals.

Gasoline isn&#8217;t just important for locals looking to keep their cars running. With the city&#8217;s power grid supplying just one or two hours of electricity each day, many residents depend on generators to run their lights and air conditioners.

Generator fuel is supposed to be purchased from official government sellers, separate from the gas stations, according to station security manager Col. Brahim Mihsson Jassim. On Saturday, workers at the Abu D&#8217;shir station were confiscating handheld gas containers from buyers hoping to bring a little extra home.

Along with the 50-liter limit, drivers are allowed to purchase fuel only on certain days, based on the last number of their license plate.

U.S. troops said they haven&#8217;t been working to break up the black market gasoline sales, but have been keeping an eye on prices and sellers in the area.

Tennimon said U.S. officials also do background checks on all gas station workers, either private or government-run, to make sure insurgents aren&#8217;t getting access to the valuable resource.

Meanwhile, Jassim said he has been extra vigilant with new workers, emphasizing the importance of dealing with locals quickly, professionally and fairly. Two workers were recently suspended for six months and docked 20 percent of their pay for lying about the price of gas to customers, and pocketing the difference.