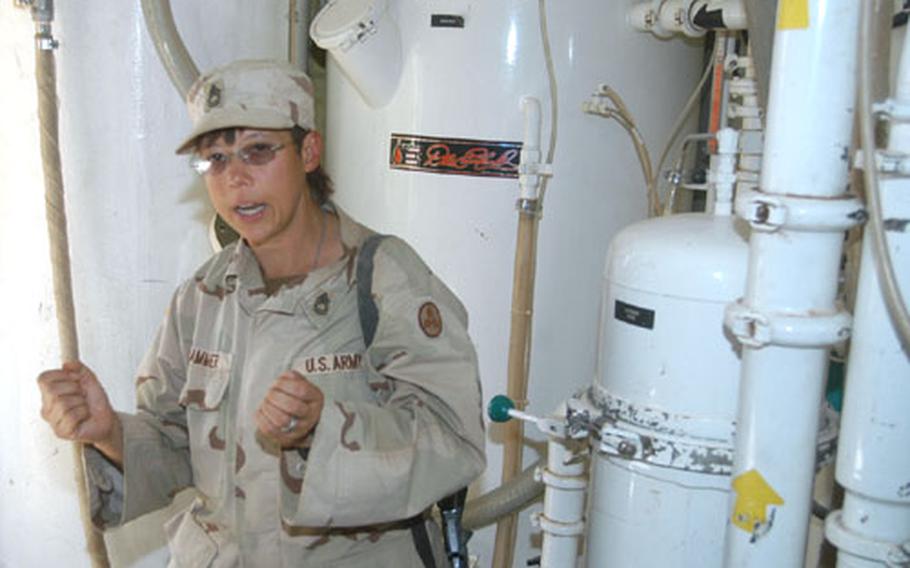 Soldiers fill up a water truck at LSA Anaconda, Iraq. The base is home to about 15,000 soldiers. (Ron Jensen / S&S)

LSA ANACONDA, Iraq &#8212; The members of the 326th Quartermaster Detachment (Water Purification) are in a race.

They have to purify enough water to stay ahead of the amount used daily by about 15,000 soldiers at this logistical support area 40 miles north of Baghdad.

So far, they are winning.

That&#8217;s the output of one Reverse Osmosis Water Purification Unit, or ROWPU. The unit is one of 10 on base belonging to the 692nd Quartermaster Battalion, an Army Reserve unit out of New Castle, Pa. Each machine runs about 20 hours each day.

The ROWPUs sit near the canal that runs alongside the sprawling, dusty base. In the canal is made up of water from the nearby Tigris River. The water is horrid, containing raw sewage from both animals and humans. However, the locals seem to pay no attention to their water&#8217;s condition.

Since the troops would risk cholera, typhoid or something worse if they did the same, the quartermaster unit is in Iraq to turn that putrid river water into something clean and healthy.

Lt. Col. Bill Griffith, the battalion commander, said the water that comes out of a ROWPU exceeds the water quality standards in the States.

Chlorine is then added to prevent later contamination from dirty buckets or trucks. Davis&#8217; company does frequent tests to keep the chlorine at about two parts per million.

The treated water is stored in large rubber bags set side by side on the base. Each holds 50,000 gallons of water.

Filled, the rubber bags reach five feet in height. In the summer heat, a few ruptured, spilling their contents across the landscape.

Around the region, the 692nd Quartermaster Battalion has continued to pump new life into the water supply for troops.