‘Keep our little town ... in your hearts’ 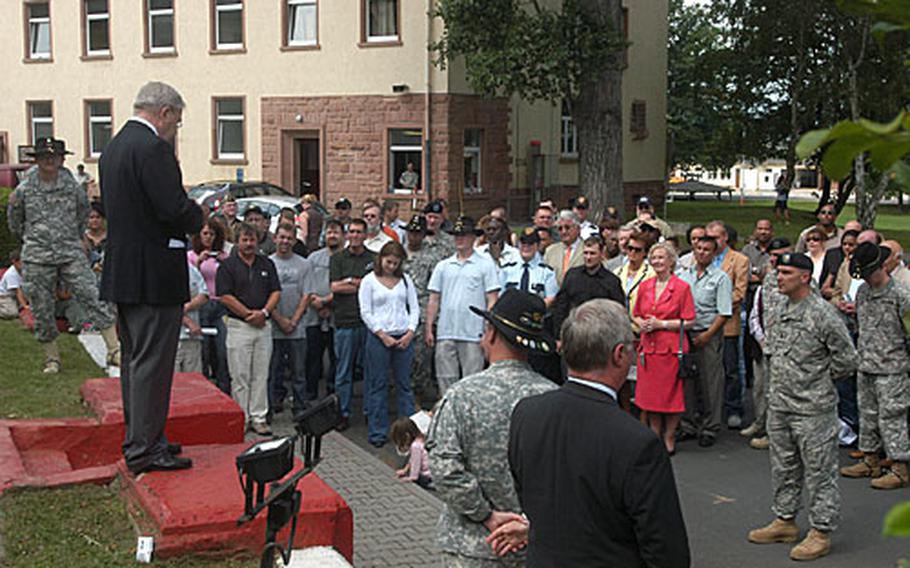 Jules August Schröder witnessed the arrival of American forces in Büdingen, Germany, in April 1945, as well their departure Wednesday from Armstrong Barracks. Before the U.S. flag was lowered for the final time, Schröder recounted for those people gathered what he has witnessed over the past 60 years. (Kevin Dougherty / S&S)

B&#252;DINGEN, Germany &#8212; Jules August Schr&#246;der stood Wednesday atop a short wall near the flagpole on Armstrong Barracks to address the small crowd.

The crowd listened intently, so the fact that Schr&#246;der didn&#8217;t have a microphone to amplify his voice mattered not. Several U.S. soldiers in the audience wore black Stetsons. After all, this is cavalry country. Has been since Schr&#246;der was a boy.

Then a peace token was thrown to one of the girls in his group.

On Wednesday, lives lived and lost were remembered at a brief retreat ceremony to mark the final full day of the U.S. presence in B&#252;dingen. Built for the German army in the mid-1930s, Armstrong Barracks has almost exclusively been a post for American cavalrymen, most recently the 1st Squadron, 1st U.S. Cavalry Regiment.

During the Cold War, the Soviet-led Warsaw Pact forces were never that far over the horizon, a point B&#252;dingen&#8217;s mayor, Erich Spamer, routinely makes.

The 40 soldiers left to close down the post were joined Wednesday by their former commander, Lt. Col. Matthew McKenna. Several others dropped by, too.