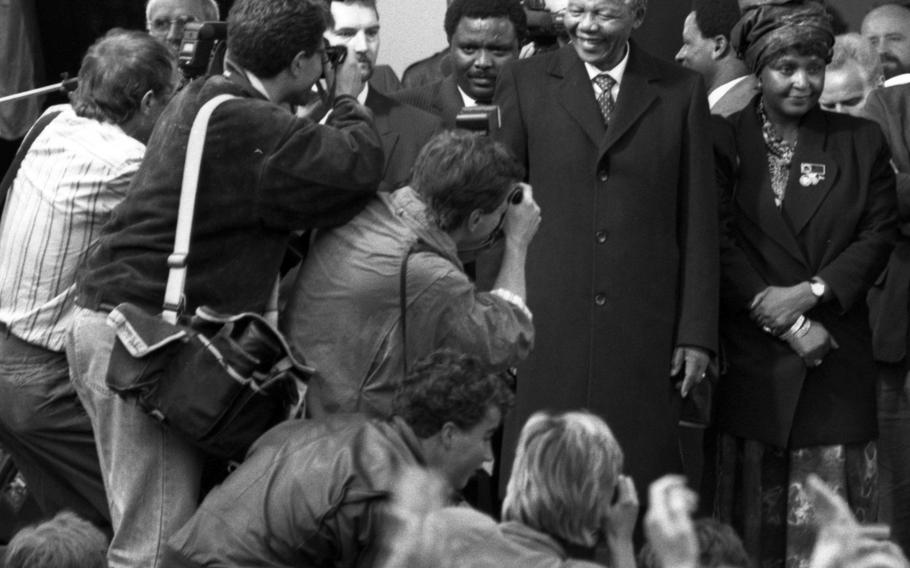 Buy Photo
Photographers focus in on Nelson Mandela and his wife, Winnie, as they arrive at a rally in Bonn in June, 1990. (Michael Abrams/Stars and Stripes)

Buy Photo
Photographers focus in on Nelson Mandela and his wife, Winnie, as they arrive at a rally in Bonn in June, 1990. (Michael Abrams/Stars and Stripes) Buy Photo
Nelson Mandela gets flowers from a child. (Michael Abrams/Stars and Stripes) 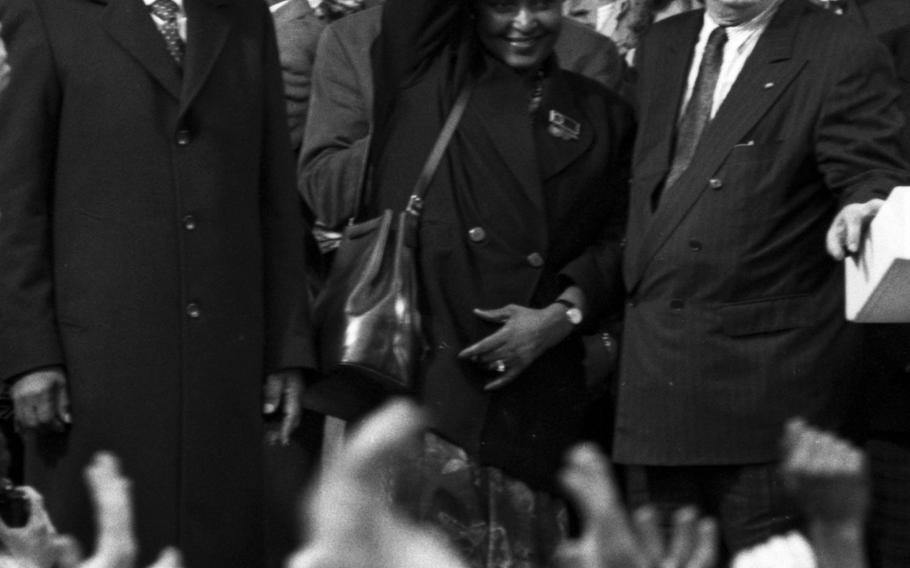 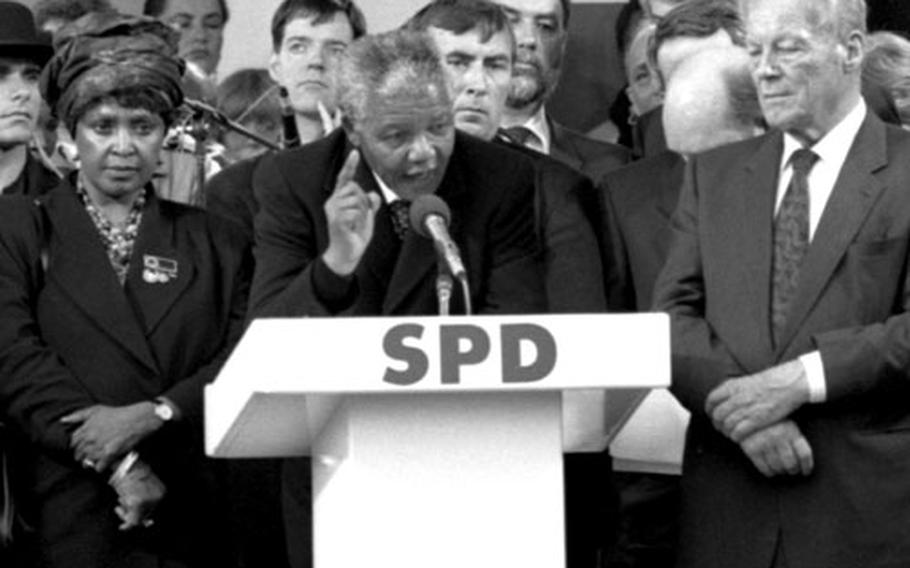 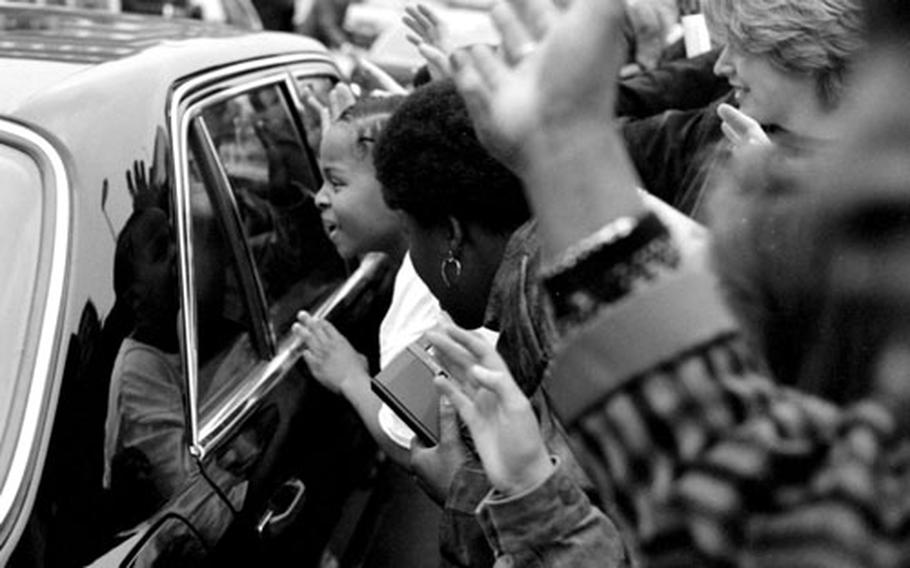 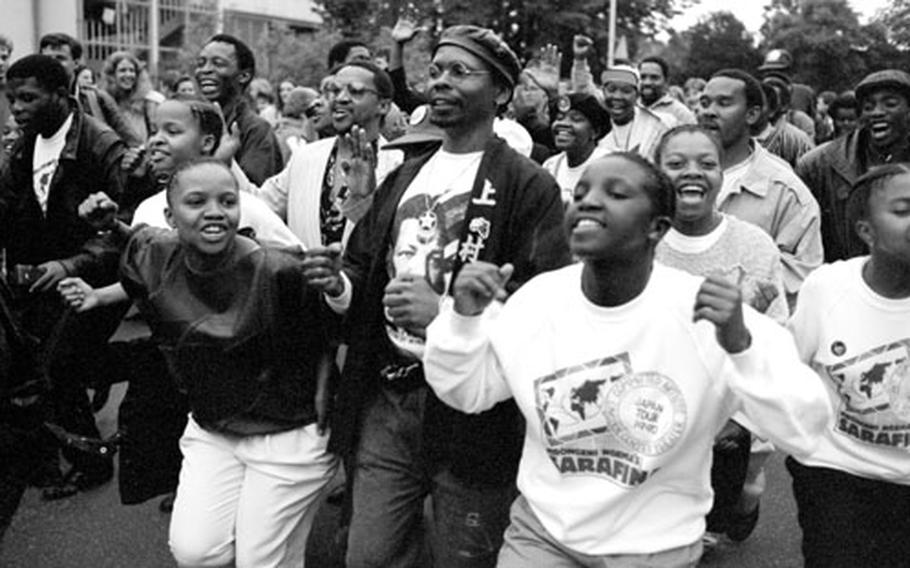 BONN, West Germany — African National Congress leader Nelson Mandela said Tuesday that the lifting of sanctions against South Africa would hinder talks between his organization and the government.

Mandela told reporters that "nothing should be done which might be interpreted by the people of South Africa and the international community as disrupting the discussions that are going on today because these discussions are intended to reach agreement as soon as possible."

"We feel that any move by any country toward the easing of sanctions would be counterproductive," he said.

The man former West German Chancellor Willy Brandt introduced Monday as "the next president of South Africa" said his two-day mission to West Germany was aimed at keeping sanctions against South Africa.

The issue is expected to come up next week in Luxembourg at a meeting of European Community foreign ministers and at a full meeting next month in Dublin.

"I don't know how Chancellor (Helmut) Kohl will vote," Mandela said after meeting with Kohl. "But I have the feeling that he will reconsider his original intention of reviewing the possibility of lifting West German sanctions."

Without directly addressing the sanctions issue, Kohl's office issued a statement saying, "The chancellor underscores the necessity for the quick and complete elimination of the existing apartheid structures and the full inclusion of all South Africans" in the nation's political process.

The 71-year-old Mandela said many governments feel South African President F.W. de Klerk should be rewarded for softening the government line on segregation.

"De Klerk is an honest and courageous man who is facing severe criticism from the extreme right among the white population, but lifting sanctions will not appease these people," said Mandela, who spent 28 years in prison. "We shall not accept anything less than complete self-determination, and the Western countries should not hinder our struggle."

Mandela, described by Brandt as "the man they tried to bury alive" in prison, said he had been negotiating secretly with the South African government for changes to the apartheid regime since 1986.

Asked how it was possible to forgive the people who kept him imprisoned for almost three decades, Mandela said:

"Let bygones be bygones. It's the only road to the future."

Mandela is in the second week of a six-week world tour to whip up support for ANC policies. He has visited Botswana, France and Switzerland and is scheduled to fly back to France Wednesday, then to Italy, Canada and the United States. After that, he returns to Europe to visit Britain and Ireland. He will fly home via the African countries of Uganda, Ethiopia, Kenya and Mozambique.