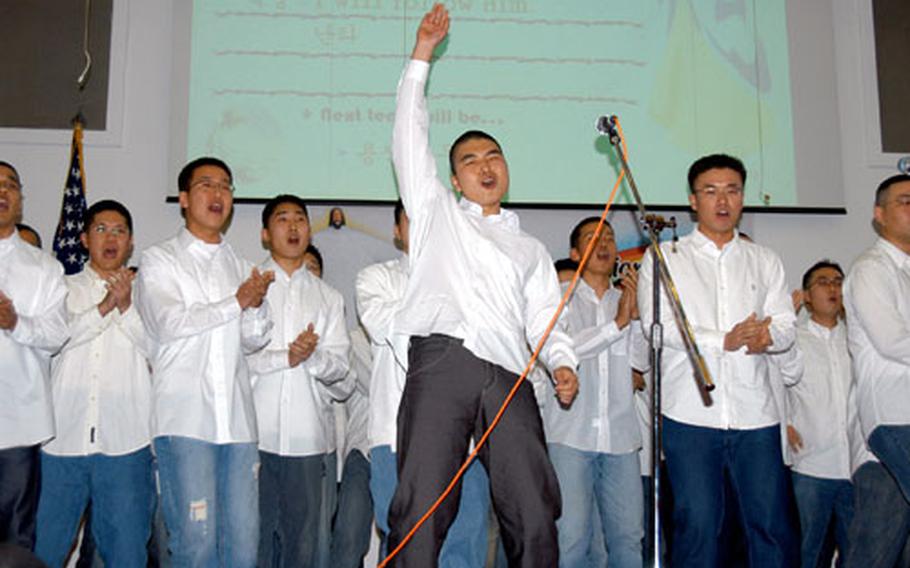 Cpl. Kim Dong-woo, 21, sings with other South Korean soldiers Friday during a talent contest on Yongsan Garrison. Kim works with the 2nd Infantry Division north of Seoul, and his group took second place in the contest. (Teri Weaver / S&S)

YONGSAN GARRISON, South Korea &#8212; Hundreds of South Koreans who work with the U.S. Army competed Friday afternoon for a chance at a four-day vacation from work.

Hundreds of KATUSA and their family members packed the chapel for the 14th annual contest, sponsored by the Republic of Korea Army Support Group and U.S. Forces Korea/8th U.S. Army chaplains.

The goal was to elevate and encourage the Christian faith through fellowship and praise, according to organizers.

Judges awarded prizes to 11 teams based on attitude, impression, preparation and musical perfection, according to South Korean Maj. Kang Tae-gwang.

Hong said it was difficult getting the team together to practice over the last couple of months.

The second-place team came from artillery units at camps Casey, Hovey and Castle.

Sgt. Park Sung-joon of Camp Casey said he thought his 47-member team would sweep the competition.

The performances brought down the house, with audience members shouting praise.

Park, who gets out of the military in two months, said today&#8217;s event would be a cherished memory.

He said he hopes that when he competes again as a civilian, &#8220;U.S. servicemembers will join and watch our performances.&#8221;