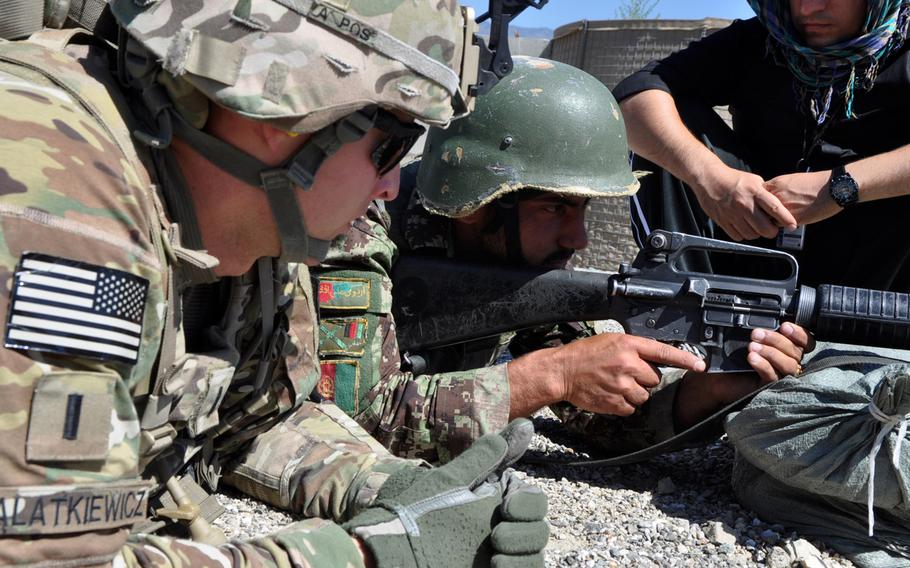 Buy Photo
The decision by Afghanistan???s Loya Jirga council to allow foreign advisers to remain in the country after 2014 means that several thousand U.S. and NATO instructors will likely continue to train Afghan forces. In this photo, an adviser, Lt. Jon Walatkiewicz, works with Afghan National Army troops at Forward Operating Base Joyce in eastern Afghanistan. (Josh Smith/Stars and Stripes)

Buy Photo
The decision by Afghanistan???s Loya Jirga council to allow foreign advisers to remain in the country after 2014 means that several thousand U.S. and NATO instructors will likely continue to train Afghan forces. In this photo, an adviser, Lt. Jon Walatkiewicz, works with Afghan National Army troops at Forward Operating Base Joyce in eastern Afghanistan. (Josh Smith/Stars and Stripes) 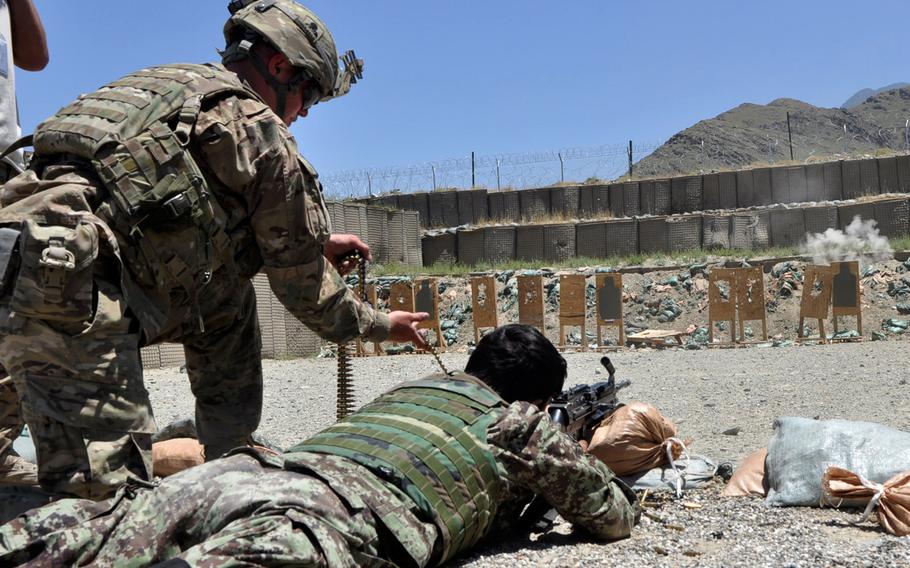 Buy Photo
The decision by Afghanistan???s Loya Jirga council to allow foreign advisers to remain in the country after 2014 means that several thousand U.S. and NATO instructors will likely continue to train Afghan forces. In this photo, an adviser, Sgt. Josh Baue, works with Afghan troops during training at Forward Operating Base Joyce, in eastern Afghanistan. (Josh Smith/Stars and Stripes)

A relatively small presence of U.S. and NATO troops in an advisory capacity after 2014 could do more for stability in Afghanistan than the large international military engagement achieved over the past decade, some analysts say.

While those analysts say a continued presence is critical to sustain the gains of the last 12 years of war, others say Afghanistan has come so far with international assistance that it could do well on its own — as long as substantial financial aid continues to flow. But without a military presence, that is not guaranteed.

Afghan President Hamid Karzai’s defiance of the recommendation by Afghan leaders that he sign the accord as soon as possible has heightened uncertainty over a continued U.S. and international presence in Afghanistan after all combat forces withdraw at the end of next year. A Loya Jirga, or council of elders, endorsed the agreement last week.

Karzai, who told the Loya Jirga he would not sign the agreement before April elections choose his successor, has subsequently demanded additional conditions, including an immediate end to U.S. military raids on Afghan homes and the release of all Afghan prisoners from Guantanamo.

The impasse also jeopardises the inclusion of other NATO nations in the follow-on misson, because an alliance status of forces accord would be based on a U.S.-Afghan agreement.

Mark Jacobson, former deputy NATO senior civilian representative in Afghanistan, said that if Karzai continues to obstruct the signing of the bilateral security agreement, “none of the work of the past 10 years will matter, as the Afghan security forces and the Afghan government cannot currently sustain itself without significant foreign aid and military assistance.”

Although the composition and strength of the follow-on mission, to be known as Resolute Support, have not yet been determined, it is likely to comprise up to 12,000 troops — about two-thirds of them Americans. Most will be advisers who will conduct their training on bases rather than in the field. A separate U.S. force will continue counterterrorism activities.

NATO officials pointed out that much has been achieved already in preparing the 350,000-strong Afghan security forces to take over complete responsibility for security starting in 2015.

“We have built up from scratch a national force of which the Afghans are rightfully proud,” said a NATO official who could not be named under standing alliance rules. “Work, however, needs to be pursued further, notably in developing those more specialized skills ... such as in air support and countering improvised explosive devices.”

Said Wali, a member of the Loya Jirga, said on Saturday that fellow delegates agreed Afghanistan still needs foreign troops to assist them with security.

“We brought up the experience of Iraq — they acted selfishly and now they are suffering,” he said, referring to the violence that engulfed that nation after U.S. troops left in 2011, when Baghdad rejected a similar agreement with Washington.

Still, some analysts have expressed doubts that a small follow-on contingent will be able to achieve what U.S. and NATO combat forces — whose numbers hit a high of 140,000 two years ago — failed to do since the 2001 invasion. Despite overwhelming superiority in numbers, firepower and mobility, the international coalition has so far been unable to defeat the Taliban-led insurgency.

“I can’t see that a few thousand Western troops will weigh terribly heavily on the operational balance,” said Nick Witney, former head of the EU’s European Defense Agency in Brussels and now a senior policy fellow at the Paris-based European Council on Foreign Relations. “It seems it will serve mainly U.S. interests, to hunt down terrorists wanted by the Americans.”

Analysts have pointed out that, historically, such training missions have had mixed results. U.S. assistance to South Korea during the Korean War and later helped create a powerful military. But three decades of equipping, training and mentoring the South Vietnamese military did not prevent it from promptly collapsing during a North Vietnamese offensive in 1975. More recently, training programs for West African countries failed to enable them to resist jihadist insurgencies that had to be beaten back by French forces with U.S. logistical support.

NATO officials have expressed confidence that the Taliban insurgency in Afghanistan has been degraded to such a degree that the Afghan security forces will be able to contain it despite a continuing lack of air and artillery support, problems with logistics and intelligence, and other weaknesses.

Analysts say much of U.S. and NATO confidence can be attributed to a calculation that the withdrawal of the foreign combat forces will diminish the fervor of the insurgency, which has always been largely driven by nationalist elements opposed to what they regard as an occupation. Furthermore, the Afghan security forces will continue to significantly outnumber Taliban fighters, who analysts estimate number 20-25,000. And finally, although peace talks with the Taliban in Qatar have not gone well so far, some form of peace process is likely to win over a sufficient portion of the guerrillas and further weaken the insurgency.

David Cortright, head of policy studies at the Kroc Institute for International Peace Studies at Notre Dame University, said Afghanistan’s main problem after 2014 will be whether U.S. and other donors will continue to pump in money to prop up the Afghan military.

Last year, the international community pledged to provide about $4 billion a year for Afghanistan’s security forces, but sustaining this commitment indefinitely will be difficult at a time when the U.S. and European countries find themselves in deep budgetary crises, Cortright said.

“So there are many doubts about the [NATO] calculations.”