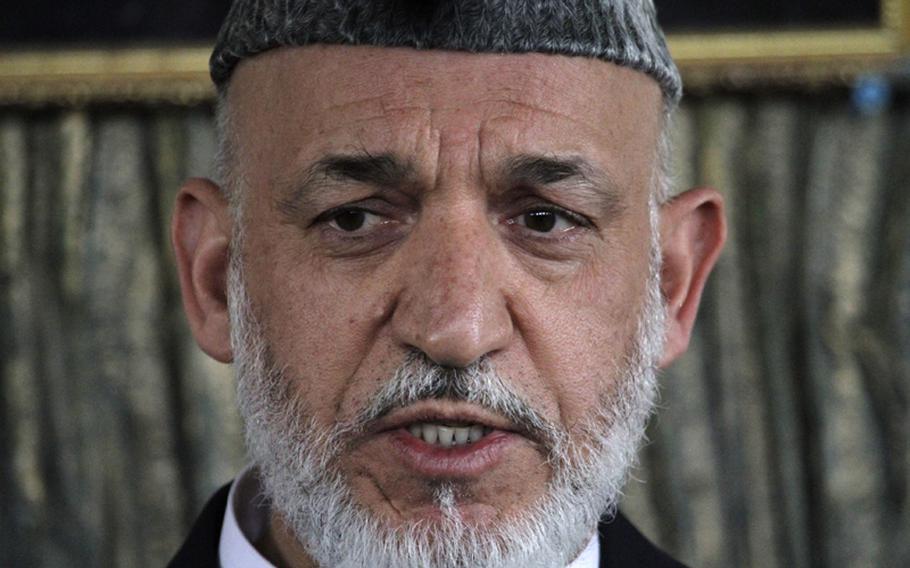 U.S. and Afghan officials this week are trying to downplay any potential rift created by President Hamid Karzai's comments in a recent interview that the U.S. military must avoid night raids and become less visible. (Allauddin Khan/AP)

KABUL, Afghanistan &mdash; President Hamid Karzai&rsquo;s call for a smaller U.S. military footprint in Afghanistan has ratcheted up tensions between the two strategic partners just days before the nations are expected to present a unified front at the NATO summit in Lisbon, Portugal.

Describing a &ldquo;grudging&rdquo; relationship between the two countries, Karzai told The Washington Post in an interview published Sunday that U.S. operations, particularly night raids, intruded on Afghan lives and could worsen the war by feeding the insurgency.

But officials tried to smooth the friction, saying that Karzai has made clear that he supports the joint strategy, and the two men shared a mutual respect.

&ldquo;The president has once again made clear that this is not a critique of the overall strategy, but this is a reflection in a mature partnership whereby partners are confident and partners take the liberty to express their views as to how overall things in the strategy can improve,&rdquo; Karzai spokesman Waheed Omar said during a news conference Monday.

The controversy underscored the sometimes contentious relationship between Karzai and the United States, which has about 100,000 troops on the ground, and highlighted sharp disagreements ahead of the NATO summit later this week where Afghanistan is a key focus. NATO and Afghan officials are expected to present a timetable for the gradual military handover to the Afghan forces, which is expected to be completed by 2014. U.S. military leaders have been touting to the presentation for weeks, stressing pockets of progress in some of the most embattled and critical provinces and highlighting successes in the development of the Afghan security forces.

Karzai&rsquo;s statement also comes ahead of a December review of the war strategy at the White House and at a time when U.S. officials appear to be backpedaling from expectations that U.S. forces would begin pulling out troops in the middle of 2011. Instead, they are now focusing on 2014 as an end date with no declared interim deadlines for troop reductions.

&ldquo;You don&rsquo;t have to be a close observer to know that if you&rsquo;ve got a strategy in partnership and one partner says it is not accepting of that strategy, and you are the military commander of that strategy, you obviously won&rsquo;t be happy,&rdquo; said one NATO official. &ldquo;Five days before Lisbon, I guess you could say it&rsquo;s not helpful.&rdquo;

Karzai has made no secret of his disdain for the night raids, but U.S. officials say the raids are an important tool in the strategy to clear overrun areas of key insurgent leaders and enable the struggling government to insert its own rule and ultimately, its own security forces. Under Petraeus, U.S. Special Operations forces have stepped up the night raids, particularly from key zones in Kandahar, Helmand and Khost provinces.

Karzai&rsquo;s opposition to the raids is at odds with what U.S. commanders are calling unprecedented success.

Karzai, who rose to power following the U.S. invasion in Afghanistan after the Sept. 11, 2001, attacks, was the golden child of the U.S. government strategy in Afghanistan under President George W. Bush. But relations soured under the new Obama administration, particularly after Karzai won a second term in an election shrouded by allegations of widespread fraud.

The U.S. administration has squared off with Karzai over allegations of deeply embedded corruption at all levels of government that have undermined efforts at winning popular trust for the government. Karzai has sharply countered that the failure of the international community to account for the billions of dollars in aid has engendered a corrupt operating environment.

Karzai recently brought that challenge to the fore when he declared that he was disbanding private security companies that guard aid projects and convoys with very short notice. Months of negotiation have led to an agreement of a more gradual implementation.

Some officials suggested that Karzai&rsquo;s provocative comments are aimed more at his Afghan constituency rather than undermining his partnership with U.S. and NATO forces.

One ISAF official said that Petraeus and Karzai&rsquo;s relationship was &ldquo;very strong. What sometimes gets in the way is domestic politics.&rdquo;

Omar denied that Karzai intended in his comments to challenge the U.S. forces to leave Afghanistan. Instead, he said the president is aware that Afghanistan is not ready for U.S. forces to pull out, and, setting the stage for Lisbon, said his comments were to be taken within the context of the transition plan, all based on readied conditions on the ground.

&ldquo;We have clarified to NATO that the president is talking about the framework within transition and his quotes need to be seen within that context,&rdquo; Omar said. &ldquo;For instance when talking about reduction of forces, that is based on the ability of the Afghan forces.&rdquo;