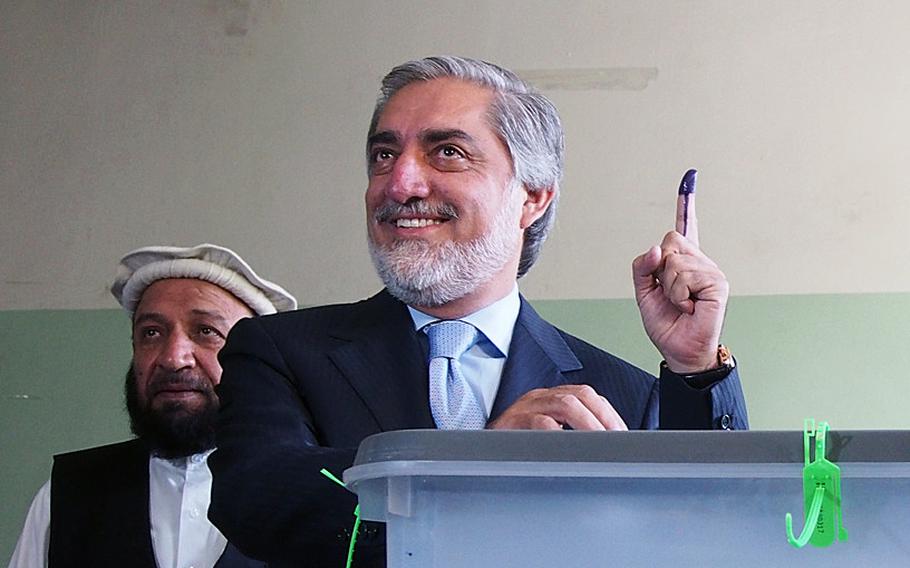 Afghan presidential candidate Abdullah Abdullah holds up an ink-stained finger after voting in the June 14, 2014, runoff presidential election. Abdullah, a former foreign minister, is now protesting the vote alleging that there was massive fraud in the election. (Heath Druzin/Stars and Stripes)

KABUL — President Hamid Karzai has endorsed a call for the United Nations to step in to mediate an escalating election dispute, as Afghanistan braced for demonstrations Saturday called by a presidential candidate claiming fraud.

The candidate, former Foreign Minister Abdullah Abdullah, took to the airwaves the day after the June 14 runoff election, claiming not only that the vote was rigged, but that Afghanistan’s main election body was complicit in the fraud. He ordered all of his election observers to stop their work and called for vote counting to cease.

He also called for the UN get involved, which Karzai endorsed on Friday, while also offering to have the country’s two vice presidents oversee negotiations between Abdullah and his election opponent Ashraf Ghani, a former finance minister.

“If this action by the UN can put an end to the problems, we not only accept it, but we welcome it,” Karzai said in a statement.

The winner of the contest between Abdullah and Ghani would succeed Karzai in what would be Afghanistan’s first democratic transfer of power.

A peaceful succession is seen as key to the Afghan government’s legitimacy and to any continuing international military mission in the country. Karzai has refused to sign a security agreement with the United States that would pave the way for a small international military contingent to stay in the country past 2014. That contingent would train and assist Afghan forces as well as conduct counterterrorism operations. Both Abdullah and Ghani have promised to sign the agreement if elected.

Preliminary results from the runoff are not expected until July 2. The announcement of final results is scheduled for July 22.

But with Abdullah heatedly contesting the fairness of the election, many experts worry that political bickering could turn violent, and on Friday Abdullah supporters were setting up camp throughout Kabul in anticipation of Saturday’s rallies. Abdullah said any protests would be lawful.

Heightening fears of violence Friday, security guards of the governor of Paktia province, a Ghani supporter, engaged in a deadly gun battle with police in Balkh province, an Abdullah stronghold. The governor, Juma Hamdard, said three of his bodyguards were killed and four injured when police opened fire on his convoy at a checkpoint south of Mazar-e-Sharif. A Balkh province security official confirmed the shootout and said one police officer was also killed.

Spokesmen for Abdullah and Ghani could not be reached for comment Friday.