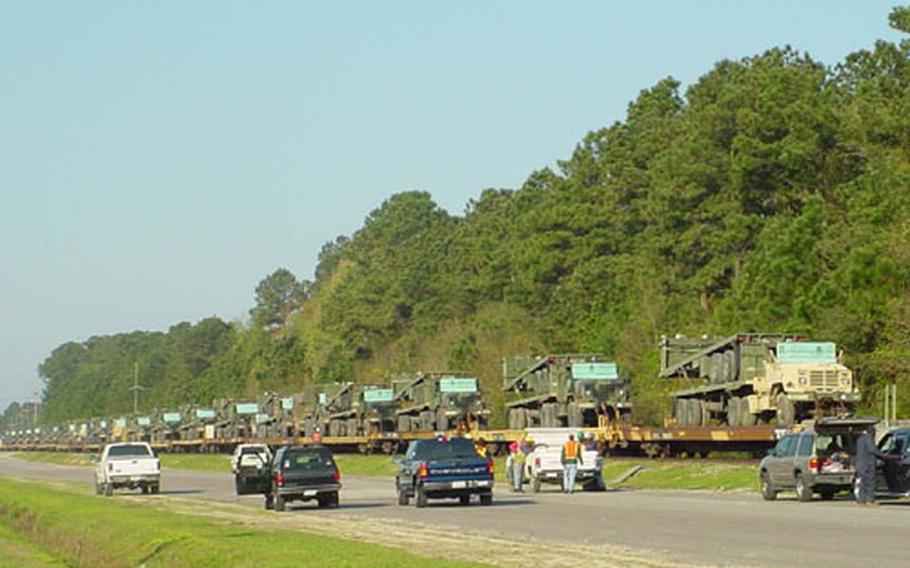 Stretching as far as the eye can see, a line of U.S. military vehicles sits on railcars during the Iraq war, awaiting transport by ship from Charleston, S.C., to the battle area. The Army&#39;s 837th Transportation Battalion (Terminal), the Kargo Kings of Pier 8, Pusan, South Korea, sent some of their personnel to Charleston and other ports to aid the vast logistics operation that supported the war. (Courtesy of U.S. Army)

TAEGU, South Korea &#8212; It was a cold, moonlit night on the waterfront in Antwerp, Belgium, and Army Capt. Courtney Brooks was a long way from his wife and children in Pusan, South Korea.

The war in Iraq was under way and the military needed people with military shipping expertise to help with the immense logistics effort of getting equipment and supplies put aboard ships and sent to the war theater.

Brooks is a member of the Army&#8217;s 837th Transportation Battalion (Terminal), known as the Kargo Kings, based at Pier 8 in north Pusan Harbor. Units such as the Kargo Kings are all about shipping: The Kargo Kings manage all military cargo moving in or out of South Korea by ship.

The military pulled seven members of the battalion for a three-month deployment to Antwerp, Belgium; Rotterdam, Netherlands; Charleston, S.C.; Kuwait City and other shipping points.

Meanwhile, across the Atlantic Ocean in Charleston, Mark Rice, interim chief of the Kargo Kings&#8217; operations division, was working closely with an Army sergeant from another unit.

&#8220;Our job was to go on board the vessels as they were loading and supervise the stevedoring gangs, making sure they stayed pretty much to their stowage plan,&#8221; said Rice, who also was struck by the immense scale of a wartime shipping effort.

&#8220;There was one time we were staging those water tanks and they were four rows deep and went back about 30 vehicles. Just to see that many of a type of truck was pretty amazing,&#8221; Rice said.

At Pier 8 in Pusan, said Rice, one of the bigger ships might come in with 200 to 300 trucks or other pieces of big military hardware. But at Charleston, a single ship might haul from 800 to 1,500 vehicles, depending on its size.

At a port in Kuwait during the same period, Staff Sgt. Tracy Robinson, yet another Kargo King member, was getting a valuable schooling in the use of a computer system that tracks where ships are and what their cargo is.

Called WPS, for Worldwide Port System, such tracking information goes into reports that help the brass gauge what tanks, trucks and other materiel is on its way, and when and where it will arrive.

Brooks, Rice and Robinson said they picked up new insights that will be useful in their work at Pier 8, something the Kargo Kings commander welcomes.

&#8220;I was glad to be able to provide support to that operation and it means that the troops I was able to send gained a lot of real-world experience and a lot of training,&#8221; said Lt. Col. Jim Brundage.