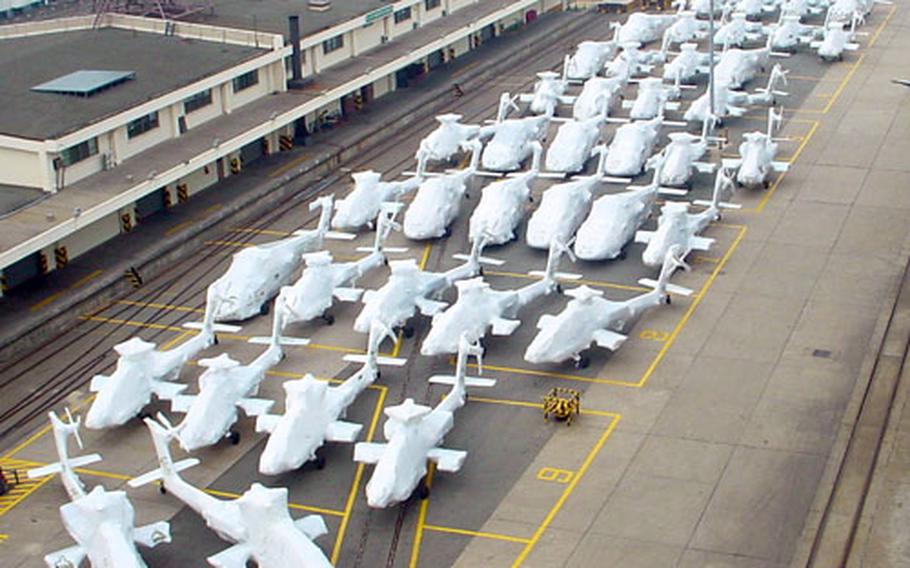 Pierside at the Army&#39;s Pier 8 in Busan, South Korea in this September 2002 photo, shrink-wrapped AH-64 Apache helicopters await loading onto ship bound for the United States. The Army&#39;s 837th Transportation Battalion (Terminal), now headquartered in Daegu, oversees all the U.S. military&#39;s seagoing shipments into and out of South Korea. (Mark Rice / Courtesy of U.S. Army)

The unit, whose official name is the 837th Transportation Battalion (Terminal), manages the U.S. military&#8217;s seagoing cargo moving in and out of peninsula ports as well as the ship-delivered merchandise bound for the peninsula&#8217;s U.S. military commissaries and exchanges.

Its personnel at Pier 8 in Busan harbor ensure the cargo clears customs and that contracted stevedores work pierside to load or unload it.

This month, the Kargo Kings expect to bring in &#8220;a significant amount&#8221; of Marine equipment for the Reception Staging Onward Movement and Integration (RSOI) exercise. Everything from trucks to tracked vehicles and lots of other gear is needed for the training. The battalion already is &#8220;knee deep&#8221; in the process, Lt. Col. Joseph Calisto, the battalion&#8217;s commanding officer, said Tuesday.

Once ships dock, the Kargo Kings&#8217; contracted stevedores get the cargo off the ship and onto trucks operated by a South Korean commercial firm working under contract with the Army&#8217;s 25th Transportation Battalion. Those truckers haul it to its destination, Calisto said.

Formerly headquartered at Pier 8, with soldiers living at Camp Hialeah in Busan, the battalion&#8217;s headquarters element moved to Camp Henry in Daegu in May, after the Army closed Camp Hialeah.

Although its headquarters now is at Camp Henry, other battalion employees continue to operate out of Pier 8, booking cargo shipments and otherwise handling the unit&#8217;s business, Calisto said. Of the battalion&#8217;s 48 personnel, 31 are South Korean nationals who typically have 18 to 20 years with the unit, Calisto said.

The battalion has benefited from the move to Daegu because it places the command group on the same installation with other key logistics units, including the 19th Sustainment Command (Expeditionary), Calisto said.

&#8220;You get face-to-face coordination, you get relationship building&#8221; by attending the same meetings and planning sessions there, he said.