Karaoke night, other amusements take a back seat at Kandahar 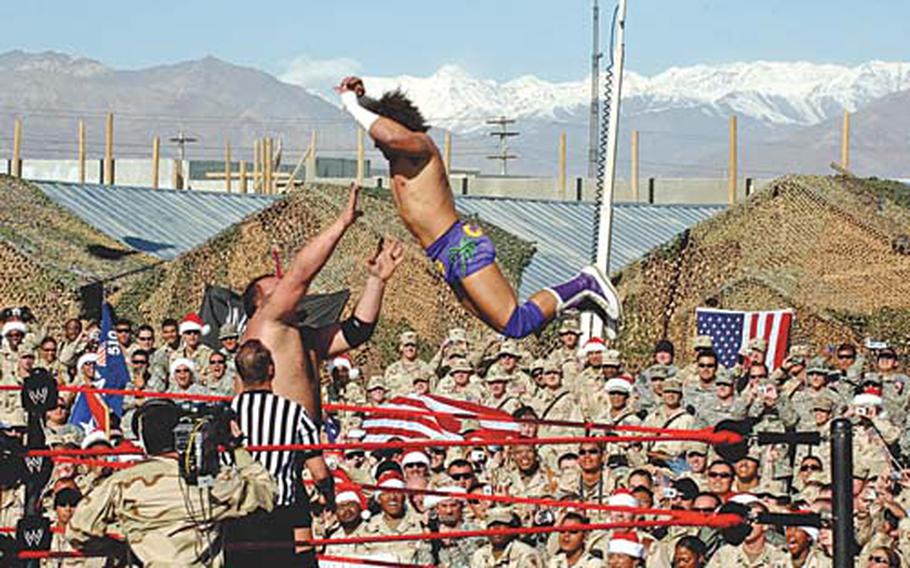 A wrestler with World Wrestling Entertainment throws himself on his partner during a match at Bagram Air Field in 2005. Leisure programs at larger bases will be reviewed with an eye toward focusing more on the mission. (Musadeq Sadeq/AP)

A wrestler with World Wrestling Entertainment throws himself on his partner during a match at Bagram Air Field in 2005. Leisure programs at larger bases will be reviewed with an eye toward focusing more on the mission. (Musadeq Sadeq/AP) 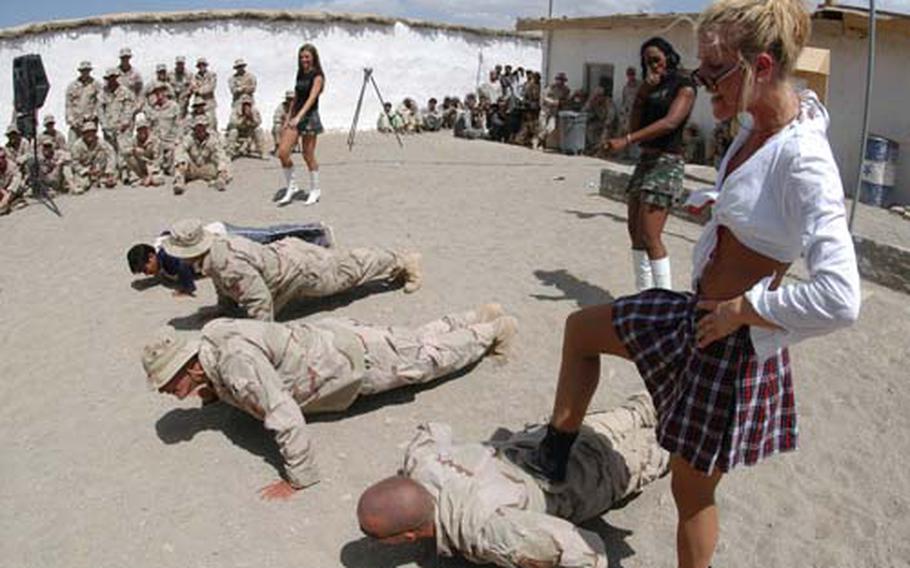 Buy Photo
Soldiers do pushups under the watchful eye -- and foot -- of Denver Broncos cheerleader Holly Baack during a July Fourth show at FOB Sweeney in Zabul province in 2005. Leisure programs at larger bases in Afghanistan will be reviewed with an eye toward focusing more on the mission. (Stars and Stripes file photo)

Karaoke, salsa and hip-hop gatherings and a few other popular programs have been shut down at Kandahar, and it could happen at other installations in Afghanistan as commanders carry out a directive by Gen. Stanley McChrystal to focus more on the mission.

Resources devoted to amusing troops on the larger bases would be better used supporting warriors on the more remote, bare-bones bases, officials say.

Brig. Gen. Dan Schultz, commander of the 143rd Expeditionary Sustainment Command and the senior officer for the U.S. garrison on Kandahar, said the final decision on what will be closed will be made by the ISAF headquarters later this year.

The troops living in austere conditions at forward operating bases focus entirely on the mission, he said, and there&#8217;s a perception that troops on rear-area bases like Kandahar &#8220;aren&#8217;t doing anything.&#8221;

Officials say too many resources are being used on things unrelated to combat.

&#8220;Instead of flying bullets and food rations to troops at austere combat outposts, some planes and helicopters are instead being used to ferry ice cream and fried chicken to troops far from the front,&#8221; according to an article posted on ISAF&#8217;s Facebook site.

&#8220;Troops who should be on patrol to help protect Afghan civilians from insurgents instead get stuck pulling guard duty while their comrades whoop it up at hip-hop night,&#8221; the article continues.

At Kandahar Air Field, word has spread quickly throughout the coalition ranks that the Burger King, Subway, Tim Horton&#8217;s coffee shop and other vendors could be closing on &#8220;the boardwalk,&#8221; a large, covered walkway surrounding a dusty sporting field.

The British, who have command in the south and run the garrison at Kandahar, say they don&#8217;t intend to end any of their recreation programs because they use an &#8220;Afghan First&#8221; policy, hiring local nationals to provide goods and services, which pose no drain on resources.

Cutting the leisure activities and services will allow more military supplies to route through air fields like Kandahar and Bagram because it will &#8220;free up space for military aircraft,&#8221; according to the release.

Army Sgt. Travis Payne, in Kandahar this week with the 154th Transportation Company, said services such as the fast food franchises are important &#8212; and expected &#8212; for troops who visit from outlying areas.

Pulling those amenities out would &#8220;take away what little morale there is,&#8221; said Pfc. John Armstrong, who serves with Payne.

Staff Sgt. Josh Swainston, who lives and works on Forward Operating Base Ramrod, about 50 miles west of Kandahar, said he can see both sides of the issue, but laughed when it was pointed out that he was carrying a take-out coffee from Green Beans.

One soldier who declined to give his name said he thinks it would be a good idea to close the shops and restrict the recreation programs so everyone &#8212; whether on a Spartan forward operating base or at a rear area facility &#8212; has the same opportunities.