Karaoke fans croon away in attempt to break record 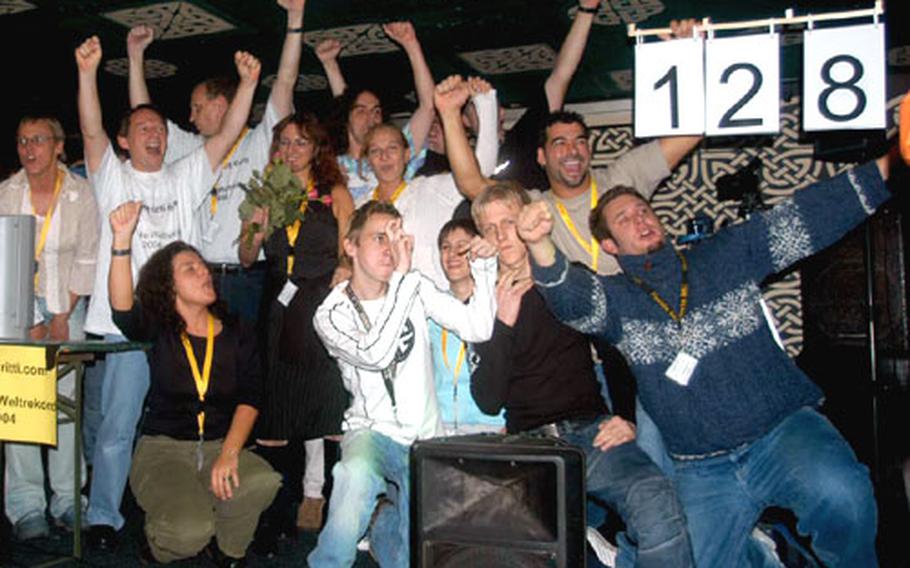 Some of the singers who helped in the 128-hour Guinness Book of World Records karaoke contest at the An Sibin Irish pub in Darmstadt, Germany, belt out "We Are the Champions" by Queen after the sixth straight day of non-stop singing Friday. (Jessica Inigo / S&S)

Some of the singers who helped in the 128-hour Guinness Book of World Records karaoke contest at the An Sibin Irish pub in Darmstadt, Germany, belt out "We Are the Champions" by Queen after the sixth straight day of non-stop singing Friday. (Jessica Inigo / S&S) Rainer Möbius, who was the final singer in the 128-hour karaoke contest, finished up with Johnny Cash’s “A Boy Named Sue” on Friday. (Jessica Inigo / S&S)

DARMSTADT, Germany &#8212; The An Sibin, an Irish pub frequented by many Americans and U.S. troops, has sung its way into the Guinness World Records ... maybe.

Several Americans, along with German, Greek, Irish, English, and Russian karaoke stars out-sang the old record of 80 nonstop hours by a bar in England.

However, it may be a while before they actually see their name in print, according to karaoke contest organizer Wolfgang &#8220;Stritti&#8221; Strittmatter. The whole event was put on videotape, and 35 videocassettes have to be sent to Guinness for review before they are named the new record holders.

&#8220;It&#8217;s like in the Olympics. Sometimes, after a review, the medal is removed from the athlete. It doesn&#8217;t matter, though, because we had so much fun doing it,&#8221; said Strittmatter, who originally brought up the idea of the karaoke contest as a joke.

The event turned out to be no laughing matter. Participants had to adhere to strict rules imposed by Guinness, which included no more than 30-second lag time between each song, the same song couldn&#8217;t be repeated within a four-hour cycle, participants had to sing actual lyrics, and songs had to be sung in its original format.

Participants had to be at the pub an hour before their performance to ensure the smooth transition from one singer to the next.

&#8220;The hardest day for me was Tuesday,&#8221; explained Kevin Dukes, who sang between 10 to 12 hours throughout the week. On Tuesday he sang from 2 to 5 a.m., partially covering for another participant who got sick, then came on later from 8 to 9 a.m. He went to his home just outside of Darmstadt for some food and rest until his next performance from 7 to 8 p.m. and then he was on again Wednesday morning at 2 again.

Dukes said during the six-day event a couple of singers got so hoarse they could no longer participate, but others were so committed that they slept on wooden pub benches to ensure the competition didn&#8217;t miss a beat.

An Sibin staffed the pub 24 hours a day throughout the contest, helping to ensure participants stayed motivated.

&#8220;My job was a matter of keeping everyone awake with endless coffee,&#8221; said Oisin McLaughlin, who worked the graveyard shift nightly from 2 to 10 a.m.

Because of the importance of getting the timing right, a list of singers was compiled before the event, making some of the regular Thursday karaoke visitors to the pub a little peeved they couldn&#8217;t join in on the fun.

&#8220;It was a very organized operation about who was singing, but we still tried to sneak some Americans in who always come to karaoke night on Thursdays. It was hard though, and people were nervous, because the timing had to be just right,&#8221; said Vince Hanniffy, one of the owners of An Sibin.

He said the following Thursdays would be back to normal, where everyone could participate in karaoke action.

As far as getting put in the famous record book, Hanniffy said it&#8217;ll be a fitting title.