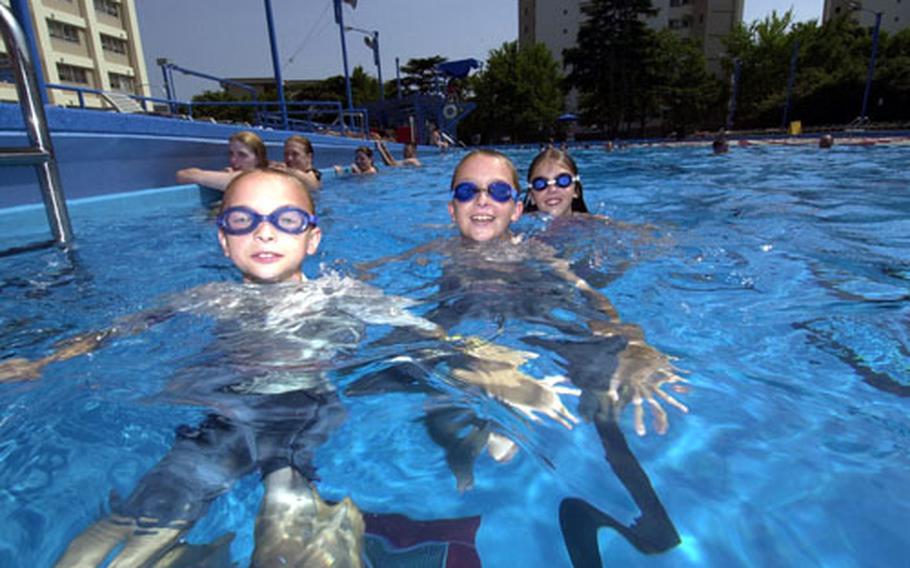 Erik Black, 8, Jason Black, 10, and Alison Wallach, 9, beat the heat while swimming at the pool at Yokosuka Naval Base Saturday. (Jim Schulz / S&S)

That&#8217;s being tossed around rather frequently these days on Kanto Plain U.S. military installations, which are locked in a record heat wave on the heels of a less-than-robust rainy season.

Temperatures soared last week, hitting 103.1 degrees in Tokyo on Tuesday, shattering an all-time high of 102.4, set Aug. 3, 1994, according to the Japan Meteorological Agency, which began keeping track of the statistics in 1923.

Officials say this center is fueling a northwesterly flow of warm, sinking, dry air down the mountain ranges surrounding the Kanto Plain, causing the higher than normal temperatures. Normally, it sits to the southeast, bringing slightly cooler weather to the Kanto, with its southwesterly winds off the Pacific Ocean.

Although Japanese forecasters predicted above-average temperatures this summer, said Yoshinori Ogawa, a weather forecaster/liaison for the 20th Operation Weather Squadron, few thought it would be this extreme.

So far, it&#8217;s been one of the warmest on record, according to Ogawa, rekindling memories of 1994, when blistering summer heat and severe drought led to rice shortages and Japan having to import rice from another country for the first time.

A dry rainy season, which officially ended last Tuesday on the Kanto Plain, a week earlier than normal, didn&#8217;t help matters, he said. The region typically gets 9-10 inches of rain on average, but this season has produced just over 4.

So far this month, Tokyo has received just .08 inches of rain &#8212; almost 6.5 inches less than usual &#8212; according to the JMA, but a forecaster there dismissed the possibility of water shortages, since dam levels are normal. Also, the northern part of the country has gotten significant rainfall.

The average temperature in June at Yokota is 76 degrees, rising to 83 degrees in July, said Maj. Michael Mills, commander of the 20th Operational Weather Squadron&#8217;s contingency planning flight. The recorded high this June was 79, and through Thursday, the average high this month has been 90.

And the worst may be yet to come.

On a more positive note, the heat wave might reduce the chance of a typhoon hitting Kanto Plain bases, according to Mills.

The position of the high-pressure center over the southwest should steer the storms to the Korean Peninsula and China, Mills said, but as long as it remains in place, steamy conditions are likely to continue for a while on the Kanto Plain.

&#8226; Best if diluted with water&#8226; Concentration of salt and sugar can make dehydration worse&#8226; Probably not needed for mild exercise&#8226; Get enough salt from food&#8226; Good option for strenuous exercise over an hour&#8226; Avoid caffeine and alcohol&#8226; Will make you urinate and can worsen dehydration