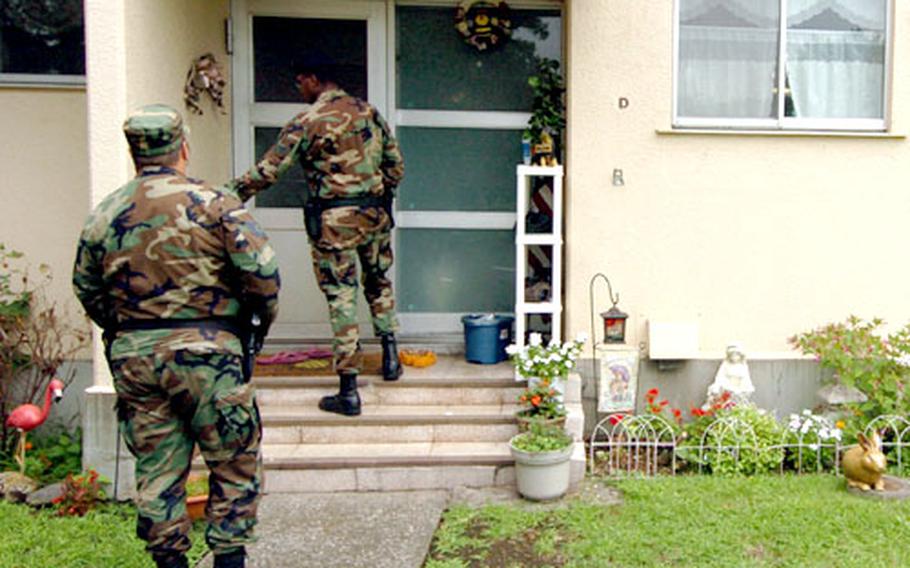 Senior Airman Kurtney Jackson and Tech. Sgt. Wesley Reeves from A Flight 374 Security Forces visit houses with lawn furniture and toys in their yards to warn residents to prepare for Typhoon Mawar. Jackson said, “I’m just surprised by everyone having their stuff still out.” (Christopher B. Stoltz / S&S)

Senior Airman Kurtney Jackson and Tech. Sgt. Wesley Reeves from A Flight 374 Security Forces visit houses with lawn furniture and toys in their yards to warn residents to prepare for Typhoon Mawar. Jackson said, “I’m just surprised by everyone having their stuff still out.” (Christopher B. Stoltz / S&S) 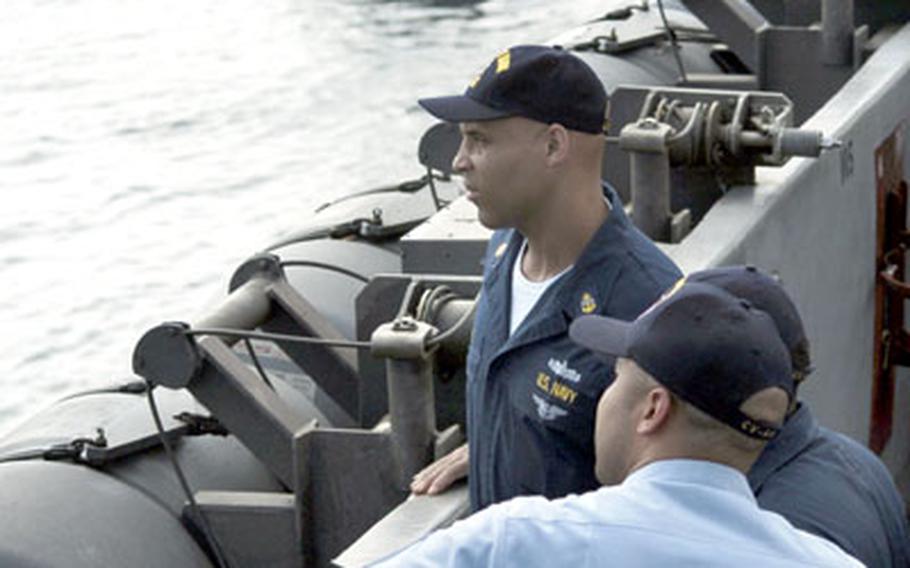 Sailors of the USS Kitty Hawk watch as the carrier departs Yokosuka, Japan, due to an approaching typhoon. The base was in TCCOR-2 Wednesday evening. (Stephen W. Rowe / Courtesy of U.S. Navy)

Typhoon Mawar continued churning north Wednesday and closed in on the Kanto Plain.

By late Wednesday evening, officials had placed Yokosuka Naval Base and Yokota Air Base under Tropical Cyclone Condition of Readiness 2, meaning winds of 58 mph or greater were anticipated within 24 hours.

Most other U.S. military installations in the Kanto Plain were placed under TCCOR-3, meaning winds of 58 mph or greater were possible within 48 hours.

At 8 p.m. Wednesday, the small but intense storm was 394 miles south of Tokyo, moving north at 12 mph. It was expected to make landfall at Hamamatsu &#8212; about 40 miles southwest of Tokyo &#8212; before sweeping past Atsugi Naval Air Facility, Camp Zama and Yokota Air Base with heavy rains and strong winds, military forecasters said. By 8 p.m. Thursday night, Mawar was projected to be about 139 miles southwest of Tokyo.

Bases across the Kanto Plain were preparing for the storm Wednesday, with the recently-returned USS Kitty Hawk putting to sea again as a precaution.

The typhoon should lose some punch as it slides across the Kanto Plain&#8217;s mountains, Willingham said, but forecasters anticipated 4 inches to 6 inches of rain and 45 mph winds &#8212; with gusts up to 70 mph &#8212; in the region overnight Thursday and into Friday morning.

Mawar&#8217;s eye was supposed to pass within six miles of the base Friday morning while approaching within four miles of Atsugi and Zama, Willingham said. &#8220;By then, it will begin to decrease in intensity. Also, the terrain surrounding the Kanto Plain will reduce the wind intensity at the installations. &#8230; Rainfall will have the biggest impact.&#8221;

Kanto Plain bases already were in TCCOR-3 at 3 p.m. Wednesday. Willingham said military officials on the Kanto Plain were taking the storm&#8217;s threat seriously but specific preparations being made were being left to each installation commander.

Mawar is the second typhoon to threaten the Kanto Plain this year. A record nine storms passed through the region in 2004. Willingham said the area averages about four a year, with two producing damaging winds of 58 mph or higher.