Kandahar may be Petraeus' first test 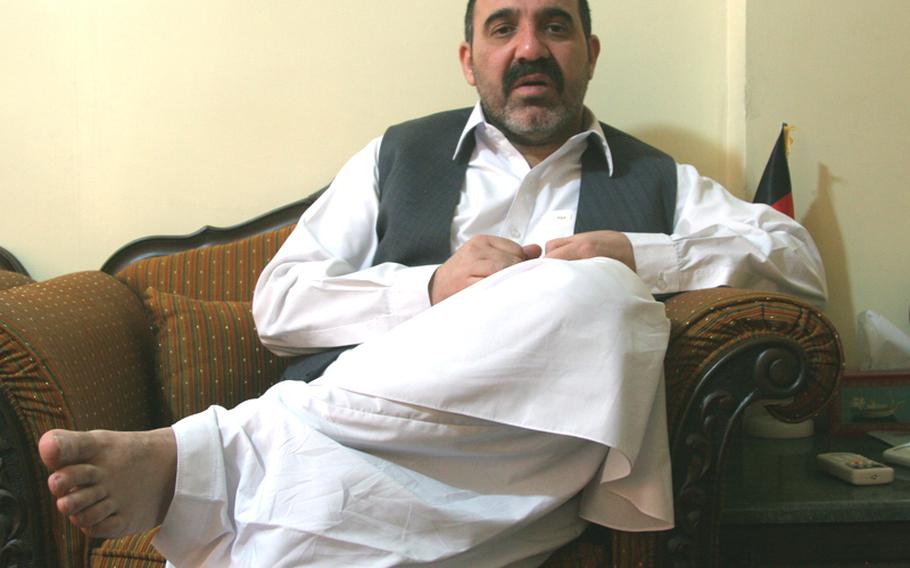 Ahmad Wali Karzai, the half-brother of Afghan President Hamid Karzai and one of the most powerful men in Kandahar, takes a break from meeting Afghan leaders at his home on May 10. (Dion Nissenbaum/MCT)

Ahmad Wali Karzai, the half-brother of Afghan President Hamid Karzai and one of the most powerful men in Kandahar, takes a break from meeting Afghan leaders at his home on May 10. (Dion Nissenbaum/MCT) KABUL &mdash; As Gen. David Petraeus seeks to reprise his role in Iraq by turning around a foundering war effort in Afghanistan, Kandahar looms as a first and likely decisive test.

The southern Afghan city has long been seen as the linchpin of U.S. strategy. And in many ways, Kandahar encompasses the central problem facing the American-led alliance &mdash; how to roll back growing support for the Taliban while relying on a corrupt local government often seen as the main cause of insurgent support.

In Kandahar, that problem is especially acute because the local government is, in essence, the family and tribe of President Hamid Karzai, led by his half brother.

&ldquo;The politics of Kandahar clearly reveal that some of President Karzai&rsquo;s closest allies, including his half brother Ahmed Wali Karzai, are more interested in manipulating the coalition for their own interests than in genuine partnership,&rdquo; concluded a recent analysis of the city by the Washington-based Institute for the Study of War. &ldquo;Wali Karzai&rsquo;s behavior and waning popularity among local populations promote instability and provide space for the Taliban to exist.&rdquo;

The study, which is generally in line with widely held views among Western officials, offered a grim description of a lawless city where the Quetta Shura Taliban of Mullah Omar compete with a mafia-like network of power brokers led by Wali Karzai.

With the Taliban effectively controlling many of the rural districts surrounding the city and stepping up an assassination campaign inside Kandahar, Wali Karzai&rsquo;s network &mdash; with support from Kabul &mdash; has moved to marginalize the provincial governor and police force, according to Western analysts. It also has allegedly monopolized Western aid contracts and built up private security companies, some now under investigation for colluding with the Taliban.

But with the U.S. relying on Wali Karzai for intelligence to strike against the Taliban, and with efforts to pressure Hamid Karzai to clamp down on corruption making little headway, Western efforts appear largely boxed in.

&ldquo;NATO doesn&rsquo;t have any great options and has obviously decided it&rsquo;s going to have to accept Wali Karzai and try to work with him,&rdquo; said Carl Forsberg, an analyst who authored the study.

Forsberg said NATO could try to use its lucrative contracts as a way to leverage influence and pressure Wali Karzai. But that could backfire and compromise his support for security operations.

&ldquo;There may have to be something of a trade-off between addressing security concerns in the short term and making the long-term investment&rdquo; in improving government, Forsberg said. &ldquo;But there&rsquo;s certainly a clear recognition from ISAF command that you have to address both issues.&rdquo;

National Public Radio reported that U.S. officials are trying to bolster the Kandahar provincial governor, Tooryalai Wesa, as an alternative. Wesa, a native of Kandahar, is a former professor from Canada.

U.S. Gen. Stanley McChrystal had scaled back plans for Kandahar in part over Hamid Karzai&rsquo;s refusal to support the kind of military-led operation once described by U.S. officers. And the continuing NATO struggle to clear the Taliban stronghold of Marjah and install a credible local government &mdash; months after U.S. commanders promised a swift operation &mdash; has also contributed to downgraded U.S. expectations.

But some analysts say efforts to clean up Kandahar will make little progress unless they start at the top.

&ldquo;The U.S. must get rid of Ahmed Wali Karzai and his mafia government and bring in a transparent and professional governor,&rdquo; said Wadir Safi, a political analyst and professor at Kabul University. &ldquo;But up to now, (Hamid) Karzai does not have the intention of allowing that to happen, and if he does not have that intention then these operations cannot be successful.&rdquo;

In May, an unnamed senior coalition official told The (London) Times that Wali Karzai&rsquo;s &ldquo;cartel&rdquo; was making a billion dollars a year from the coalition involvement in Afghanistan, through lucrative contracts in convoy protection, construction, fuel, food and security.

&ldquo;I can hardly mention one official who isn&rsquo;t under Karzai&rsquo;s control in this region,&rdquo; an elder from the Alokozai tribe told the Times. &ldquo;Local officials who don&rsquo;t obey him are killed. He has his own militias and elements of the Taliban. He can kill whenever he wants.&rdquo;

So ruthless is his control that his accusers do not ask the government to intervene.

U.S. officials hinted at plans to remove Wali Karzai as recently as the spring, but that rhetoric &mdash; like broader criticisms of the Karzai regime for failing to tackle corruption or provide steady leadership &mdash; has been set aside. At a recent press briefing, NATO spokesman Tony White said the fate of Wali Karzai and other local power brokers was &ldquo;an Afghan issue.&rdquo;

Still, signs of serious strain persist. Hamid Karzai&rsquo;s move earlier this month to force out a pair of senior Afghan security officials who were widely praised by the West was seen by many Afghans as a signal that NATO could no longer protect its favorites.

Reports that Karzai had decided to chart his own course after losing faith in the West&rsquo;s ability to defeat the Taliban have only deepened the sense that the U.S. counterinsurgency strategy is in trouble.

That strategy has now been inherited by Petraeus, with little time to change course or much apparent room to maneuver. The hero of Iraq, whom Hamid Karzai says will be a &ldquo;trusted partner&rdquo; just as McChrystal was, faces immense pressure to show results quickly, both for the U.S. and the Afghan audience. Kandahar, it seems certain, will provide the stage for a difficult second act.

&ldquo;It&rsquo;s like a movie, and for nine years the Americans have been promoting this movie and telling us it&rsquo;s going to be the best movie anyone has ever seen,&rdquo; said Khalid Pashtoon, a parliamentarian from Kandahar. &ldquo;But we are still waiting for the movie to begin. Every time we look behind the curtain we don&rsquo;t see anything.&rdquo;