Kandahar massacre reverberates across the river 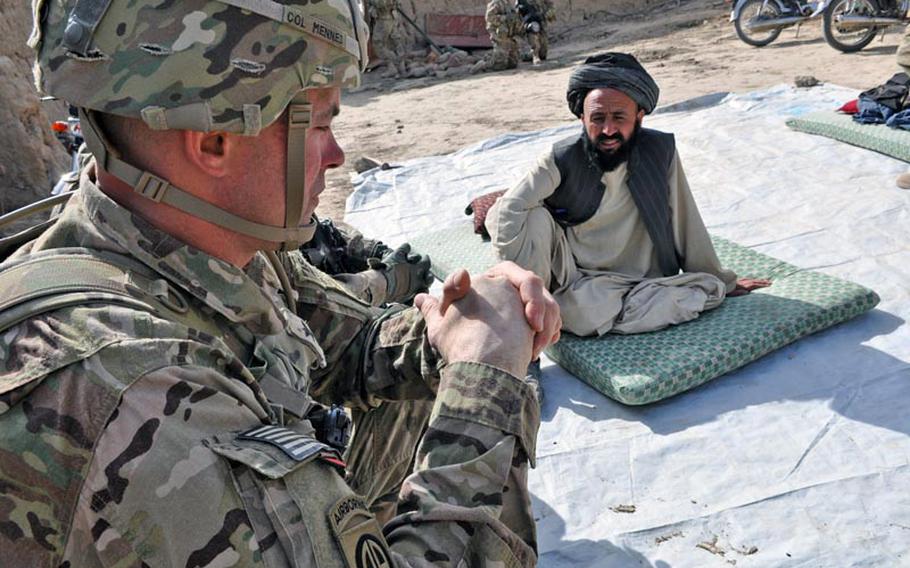 Buy Photo
Col. Brian Mennes, who recently took over an insurgent-rich swath of Kandahar province, meets with Haji Ramitullah, a local leader in the province&#39;s Zhari district. At a shura with U.S. troops, Ramitullah, like many villagers in the area, denounced the recent massacre in adjacent Panjwai district by an American soldier. (Heath Druzin/Stars and Stripes)

Buy Photo
Col. Brian Mennes, who recently took over an insurgent-rich swath of Kandahar province, meets with Haji Ramitullah, a local leader in the province&#39;s Zhari district. At a shura with U.S. troops, Ramitullah, like many villagers in the area, denounced the recent massacre in adjacent Panjwai district by an American soldier. (Heath Druzin/Stars and Stripes) Buy Photo
Capt. Nate Smith, left, of the 5th Battalion, 20th infantry Regiment's Company C, listens to a local elder during a contentious shura at Combat Outpost Pashmul South. Many farmers in the area live just across the Arghandab River in Panjwai district -- where a U.S. soldier recently went on a rampage, killing 16 villagers -- and expressed anger over the killings. (Heath Druzin/Stars and Stripes) 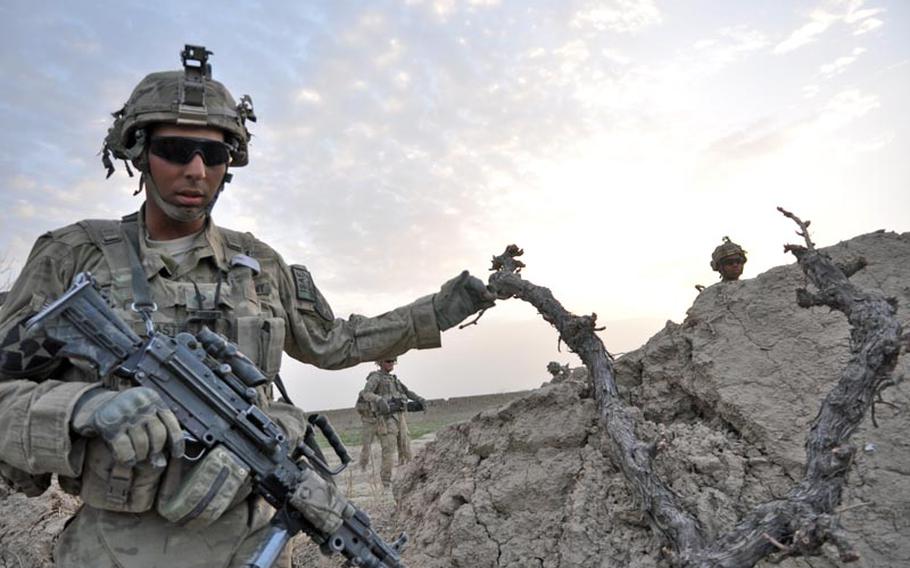 Buy Photo
Pfc. Ryan Kastris, 22, of San Diego, Company C, 5th Battalion, 20th Infantry Regiment, walks through grape rows in the Pashmul area of Zhari district during a recent patrol. Anger over the recent massacre of civilians in Panjwai province is widespread in the agricultural community, which is just across the Arghandab River from Panjwai. (Heath Druzin/Stars and Stripes)

&ldquo;Have you heard what they did in Panjwai? The Americans, they killed a lot of people,&rdquo; an elderly Afghan said to Col. Brian Mennes, who was touring the village.

Mennes, who is taking over a violent swath of Kandahar province, strayed from the talking points put out to troops by Regional Command - South in the wake of a grisly shooting rampage by an American soldier in Panjwai district that left 16 villagers dead.

&ldquo;It&rsquo;s terrible, it&rsquo;s a crime against humanity,&rdquo; he said. &ldquo;I think God will sort him out. It&rsquo;s an abomination, an atrocity.&rdquo;

For the soldiers of Company C, 5th Battalion, 20th Infantry Regiment, who occupy Pashmul South, a dusty outpost just across the Arghandab River from Panjwai, there have been daily questions about the shootings from local leaders, villagers and the Afghan security forces with whom they work.

While the response to the shootings across Afghanistan has been muted in comparison to the deadly riots over the burning of copies of the Quran at Bagram Air Base, the questions are mounting for Company C&rsquo;s commander, Capt. Nate Smith, and his soldiers, who had to cancel a kite-flying day at the base Thursday on the advice of Afghan soldiers because of planned demonstrations in response to the Sunday shootings, and there is always the chance of heightened tensions after Friday prayers.

&ldquo;It&rsquo;s obviously going to have a negative effect, and it&rsquo;s frustrating,&rdquo; Smith said. &ldquo;I don&rsquo;t know his reasons, but nothing justifies what he did. His actions have the potential to be catastrophic for all of us.&rdquo;

Smith&rsquo;s base is in Pashmul, where the grape rows and poppy fields are rich with booby traps, and the mud-hut ruins that dot the area often conceal insurgents. Many of the area&rsquo;s villagers have fled the heavy fighting there and live across the Arghandab River in Panjwai district, where the shooting occurred, crossing back only during the day to farm.

The Taliban have already used the shootings as a public relations windfall, coming on the heels of the Quran burnings, and the worry is that as the summer fighting season begins in a few weeks, they could use it as a recruiting tool. Already, the violence has picked up in Pashmul, with regular firefights and daily roadside bomb attacks, though it&rsquo;s impossible to know if there is any link to the shootings.

Omar Nawabi, a former commander in the Afghan mujahedeen who fought the Soviets for nine years and now works as a U.S. Army interpreter with intelligence soldiers at Pashmul South, said he worries the killings will push some non-Taliban to attack the U.S. out of revenge.

&ldquo;A lot of people in this area support the Taliban because they see women and children get killed,&rdquo; he said.

Caught in the middle are the soldiers here in Pashmul South, who had nothing to do with the shootings but must now factor the subsequent anger into an equation that already added up to plenty of violence as the mercury rises in the coming weeks. While stepping gingerly for fear of hidden bombs and scanning rooftops for fighters, soldiers on patrol here must also stop to address farmers who are fearful that they too will be shot, like the Panjwai villagers.

At Smith&rsquo;s weekly shura, a meeting of local elders, the area&rsquo;s top leader and an American confidant, Haji Ramitullah, made the shootings one of the first orders of business.

&ldquo;It was a bad thing because, before they burned the Quran, and then they killed 16 people,&rdquo; he said.

Soldiers in the buildings listened intently, waiting for the &lsquo;but&rsquo; clause, but it never came. Ramitullah, simply left it at that and went on to the next agenda item.

Then an explosion down the road shook the building. The elders looked up briefly, scarcely concerned. Soon after, the staccato clatter of Kalashnikovs from a distant firefight began and the meeting resumed.