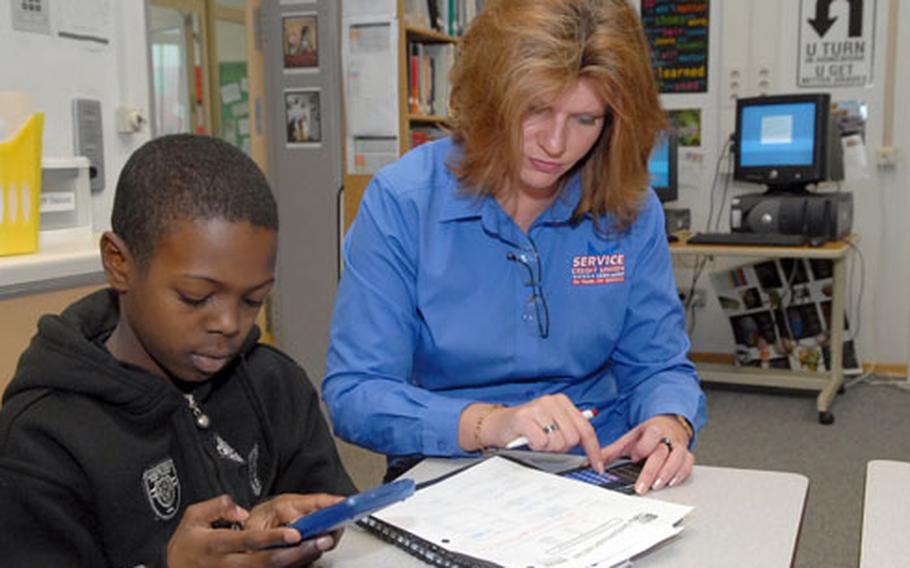 After approving his loan request to buy a used car, Sandra Campbell of Service Credit Union helps Willis Davis crunch numbers as they try to improve his credit rating. It was all part of a yearlong seventh-grade project on personal financing at Kaiserslautern Middle School. (Photos by Michael Abrams/S&S)

After approving his loan request to buy a used car, Sandra Campbell of Service Credit Union helps Willis Davis crunch numbers as they try to improve his credit rating. It was all part of a yearlong seventh-grade project on personal financing at Kaiserslautern Middle School. (Photos by Michael Abrams/S&S) 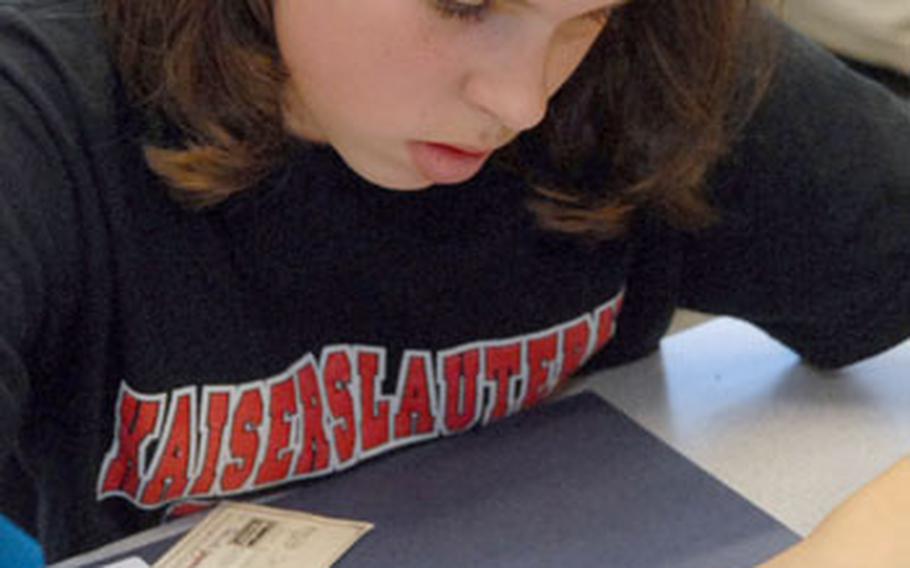 Tricia Lewis balances her checkbook after writing a check for a down-payment on a car. The exercise was part of a yearlong seventh-grade project on personal financing at Kaiserslautern Middle School. ()

KAISERSLAUTERN, Germany &#8212; Todd Poynter left home the other morning wearing a sports jacket and tie. The young man had an important meeting later in the day and he wanted to look his very best.

"They say if you want money, you have to act like you have money," he said. "So I dressed up in a suit, thought I would try to get money that way."

Times are tough. Money is tight. Lenders are leery. And so image and means do matter, given the state of the economy.

For Todd, a Kaiserslautern Middle School student, the tie tactic worked, though his successful loan application probably had more to do with his assets and debt-to-income ratio. His meeting Thursday with a Service Credit Union representative ended with the 12-year-old securing an imaginary $7,415 loan to buy a Volkswagen &#8212; though he really wanted a dark blue 1998 Porsche Boxster.

"He didn&#8217;t get the Porsche," said math teacher Margaret Hess. "It was too expensive."

Since the beginning of the school year, Poynter and his fellow seventh-graders have been participating in a partnership program with Service Credit Union. The in-school program is designed to give students a basic understanding of managing finances and calculating earnings and expenses, according to Frances Cartwright-Graeber, an SCU manager.

So far students have shopped for apartments to rent, calculated their utilities and payroll taxes, and have been issued checkbooks to pay their debts and obligations. Bi-weekly incomes are based on grades and classroom attendance.

While the program is intended to promote, in the words of school principal Susan P. Hargis, "financial fitness," it also seeks to bulk up math grades. Based on the most recent standardized math scores, two out of three seventh-graders at the school ranked in the top half nationally. Hargis is seeking to make it three out of four students.

One teacher working to change that is Hess. On Thursday, she welcomed five credit union representatives to her classroom to evaluate the students&#8217; car loan applications. Another group of loan officers went to a different class.

Many of the students in Hess&#8217; class opted earlier in the semester to rent an apartment with a friend or two to save money. One of the students who didn&#8217;t, Felix Sanchez-Herrera, had to reverse course Thursday in order to obtain the loan for the car he wanted.

"He decided the car was more important than his apartment," Hess said.

This all may be imaginary stuff, but several students said the program has given them a sense of what their parents must contend with in real life.

Nearly three months into the school year, Hess said the program seems to be paying dividends. Among her classes, math scores are up.

The children seem inspired, too. They chatted and compared notes about their incomes, taxes and monthly debts.