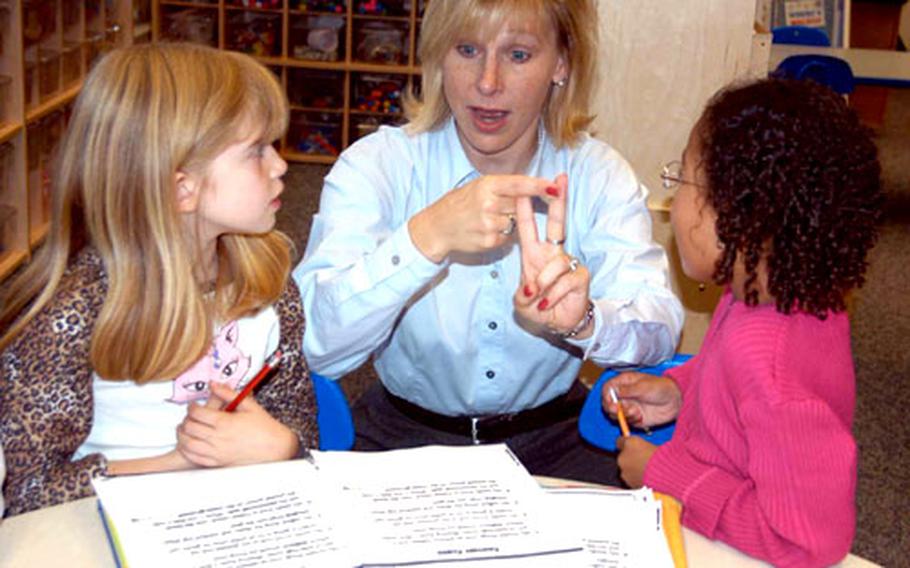 KAISERSLAUTERN, Germany &#8212; Pamela Hall wasn&#8217;t planning to make teaching a career until she had to take a work-study course in college that involved helping schoolkids.

Something about the way the children responded to her sold Hall on switching her major from business to education.

And, 14 years later, the country&#8217;s most-read newspaper agrees. On Thursday, USA Today announced it had selected the Kaiserslautern Elementary School teacher for its 2004 All-USA Teacher Team.

Hall, who teaches second and third grades, was lauded for her energy, enthusiasm and ability to teach pupils what they want to learn while still meeting curriculum requirements.

She is one of 20 educators selected as representatives of all outstanding K-12 teachers nominated worldwide, the newspaper reported Thursday. All 20 receive trophies and $500 cash awards, with $2,000 going to their schools.

Hall, of Tonasket, Wash., is the only teacher selected from a Department of Defense school this year.

&#8220;I was really excited and honored, and at the same time really humbled because there are a lot of other great teachers and I&#8217;ve learned from them,&#8221; she said.

Education professionals chose the winning teachers in a two-step judging process. Judges considered how well the teachers defined and addressed pupils&#8217; needs and the impact teachers have on pupils, the newspaper reported.

Hall&#8217;s colleagues, some of whom nominated her for the USA Today award, said she has a positive impact on children because she understands them and makes sure they understand her.

A visit to her classroom is evidence of that. Hall often uses songs, sign language and cheers to reinforce grammar, reading and math lessons. Her 19 pupils jump and cheer with abandon at the routines.

&#8220;Everybody learns differently and she&#8217;s tapping into their abilities,&#8221; said Sally Friday, a special education teacher who worked in Hall&#8217;s class last year.

The instruction is nonstop, from the time youngsters come through the classroom door &#8212; many earlier than the 8:15 a.m. bell rings &#8212; to the time they pack up their tiny rucksacks to head home.

Her science instruction uses real-world examples. This year, she has a box full of mealworms so children can see how the animals change from pupae to beetles. Last year, a boa constrictor &#8212; lent by a parent &#8212; was a temporary resident of her class.

All of her pupils gain in reading level and average one of the largest reading gains in the school, according to her nomination form. Hall also helps lead school and district initiatives as a science fair organizer and literacy teacher. Colleagues often observe her classes to help their own teaching methods.

Hall said she is able to keep the pupils&#8217; focus so well because she listens to them, talks regularly with their parents, and gets to know them.

Seven parents help regularly in her class &#8212; at least one parent volunteers every day except Monday, when she&#8217;s starting the pupils on their lesson plans.