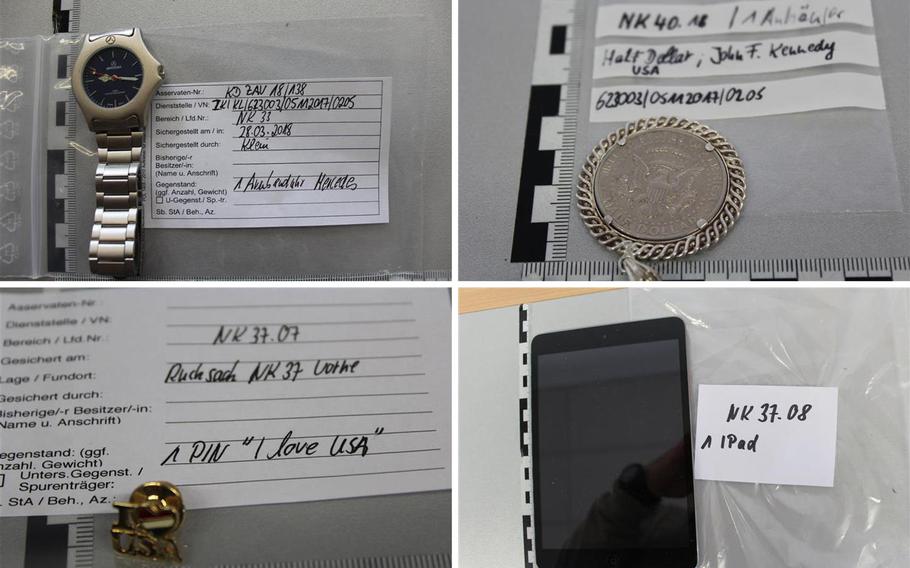 Kaiserslautern police caught a gang of burglars who are believed to have broken into the homes of Americans. Pictured are some of the items they seized. (Courtesy Kaiserslautern Police)

KAISERSLAUTERN, Germany — Kaiserslautern police have arrested members of a burglary ring suspected of targeting the homes of American civilians and servicemembers over the past two years throughout the Kaiserslautern and Kusel areas, officials said Wednesday.

More than 100 items were seized during a search last month of an apartment used by a ring member, including jewelry, rare coins, a mounted coin of President John F. Kennedy, collectable lighters and brand-name watches common in the United States but not in Germany, said Kaiserslautern police detective Stefan Secker. The value of goods is estimated at several thousand euros, he said.

Secker urged residents to lock the doors of their homes and motor vehicles, saying that Americans tend to make themselves easy targets by leaving them unsecured. About 20 homes were affected, he said; he wouldn’t reveal how many people were arrested, citing tactical reasons.

If you recognize the items in the photo above or in this police press release, call 0631-369-2595. However, if you don't recognize a specific item and want general updates on your case, you should contact your local police department.