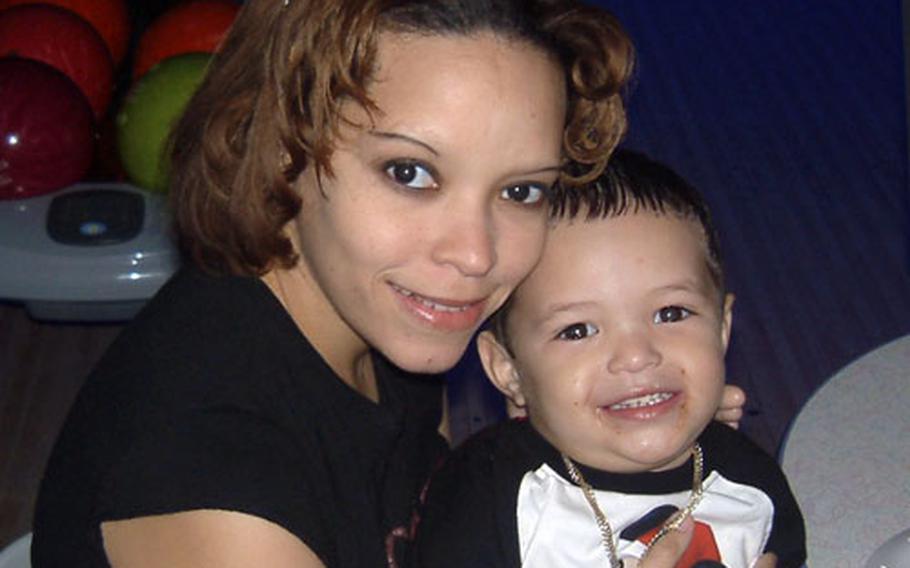 Mia Rivera Wills, shown with son D.J., died Thursday after giving birth to her third child due to complications of an emergency Caesarian section. (Courtesy of David Will)

KAISERSLAUTERN, Germany &#8212; Army Sgt. David Wills and his wife, Mia Rivera Wills, had prepared &#8212; as most military families do &#8212; for the possibility he might not return alive from his deployment to Afghanistan.

What they never braced for was the chance that something might happen to her.

But early Thursday, moments after giving birth to their third child, Mia died at the German hospital in B&#246;blingen due to complications from an emergency Caesarian section. She was 28.

Wills, who is assigned to the Stuttgart-based 554th Military Police Company, had been allowed to break away from his unit&#8217;s deployment so he could travel to Germany for the birth. He intended to return to the company after the delivery, but now will stay to attend a funeral for his wife.

Their baby daughter is healthy and will leave the hospital Sunday, leaving Wills with the challenge of taking care of three children alone while serving in a military at war.

When news of the death of Mia Rivera Wills circulated around the Stuttgart area hours after she died, many people who knew her couldn&#8217;t believe it.

Mia, who grew up in the U.S. Virgin Islands and Puerto Rico, is well known throughout the community as a dedicated wife and mother who often helped others but rarely asked for help. Her first name was Miosoty, but everyone called her &#8220;Mia.&#8221;

She served as the leader of her husband&#8217;s Family Readiness Group, which offers information and assistance to families of soldiers of the 554th, in the middle of a one-year tour in Afghanistan.

Lisa Beebe, who met Mia when she and her family arrived in Europe several years ago, said she was the type of mother and wife every woman strived to be.

Mia made no secret that her family came first, especially 9-year-old daughter Brianna and 2-year-old son D.J. She had painted her baby&#8217;s name, Tytiana, in colorful building blocks in her future room.

She served in the military as an enlisted soldier for almost nine years until leaving to take care of her children. She married her husband in July 2002 shortly before transferring to Germany.

While many people will remember her for her helping hand, most in the community will probably remember her best for her cooking. Her spicy dishes were legendary at the outdoor barbecues she often organized.

She also had a sense of humor. When she discovered she could slip her 5-foot-1 frame into a child-size Snow White costume, she wore it to a Halloween party as a joke. &#8220;She was a tiny woman with a big personality,&#8221; Beebe said.

Friends and neighbors have offered to help the Wills family, and the command has given support and counseling. David Wills told friends that recovering from the passing of his soul mate will be a tough mountain to climb.

A memorial fund has been set up to help the Wills family. To make a donation, contact the nearest Community Bank and ask how to give to the Miosoty Rivera Wills Memorial Fund.