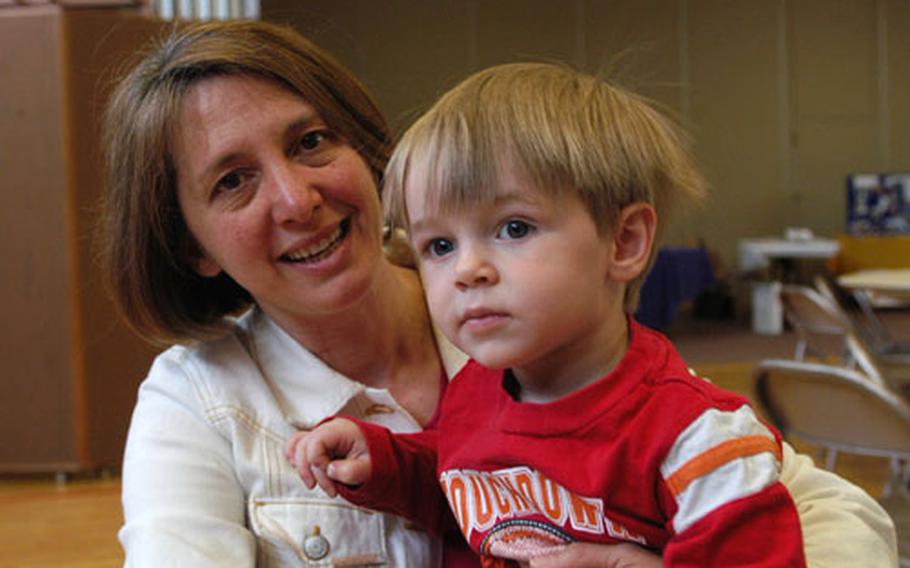 Amy Taitague has always been "Mommy" to her son, Justin, whom she adopted from a woman who used to serve in her same U.S. Air Force unit in Germany. (Matt Millham / S&S)

KAISERSLAUTERN, Germany &#8212; You could say that Justin Taitague has two moms.

There&#8217;s the woman who gave birth to him, an airman who found herself unexpectedly pregnant from a relationship that had already fizzled out.

Then there&#8217;s Amy Taitague, who adopted Justin immediately after he was born and whom the toddler calls Mommy.

At 2, Justin&#8217;s not old enough to understand what any of that means. But it doesn&#8217;t matter. Justin, a bubbly, blond ball of energy, and his real mom, Taitague, are happy.

Scores of U.S. military families in Europe are still searching for their Justin. For 15 years, the KMC Adoption Support Group has tried to make things simpler for hopeful adoptive parents.

Jeanie Veith, one of the group&#8217;s coordinators, said they try to give those hopefuls the skills and energy they need to see adoption through and make it work. Once they have that, she said, they can find the documentation and the contacts they need on their own.

But the group helps with much of that, too.

More than 180 people on Saturday attended the group&#8217;s annual international adoption symposium, at which families looking to adopt, families who have already adopted, and adopted children met with adoption professionals and people just like themselves to trade tips and stories and to learn everything from how to, to how much.

Jessica and Dominick Aritz were among that crowd. The couple tried earlier to adopt in the U.S. but was denied, they said, told that military life was too unstable for a child. Dominick Aritz is in the Air Force.

They attended last year&#8217;s symposium and soon after started looking for a baby in Guatemala, one of the two most popular locales from which Americans adopt overseas. The other is China.

They went to Guatemala to visit their son in December, but because of a paperwork snafu they&#8217;re still waiting to bring him home.

When it comes to adoption, patience is not just a virtue, it&#8217;s a necessity. It usually takes about two years from the time someone starts looking for a child to the time the adoption is completed, so &#8220;You can&#8217;t be in a super big rush,&#8221; Veith said.

Nor, depending on the route you go, can you be a pauper. The Aritzes, who opted for a foster adoption, budgeted $30,000 to pay for travel, the adoption agency, lawyers, foster care and health care for their son, and they&#8217;ve spent all of it.

Adoptions typically run around $7,000 on the low end for private adoptions up to $35,000 for foster adoptions, Veith said. In some circumstances the military will reimburse some costs of a foster adoption, she added, and other tax rebates and reimbursement programs can also reduce the foster care costs to zero.