The entrance to the 350-room lodging facility section of the Kaiserslautern Military Community Center. Air Force officials are currently doing final inspections on the hotel, which will be one of the first KMCC facilities to open. (Michael Abrams / S&S)

The entrance to the 350-room lodging facility section of the Kaiserslautern Military Community Center. Air Force officials are currently doing final inspections on the hotel, which will be one of the first KMCC facilities to open. (Michael Abrams / S&S) 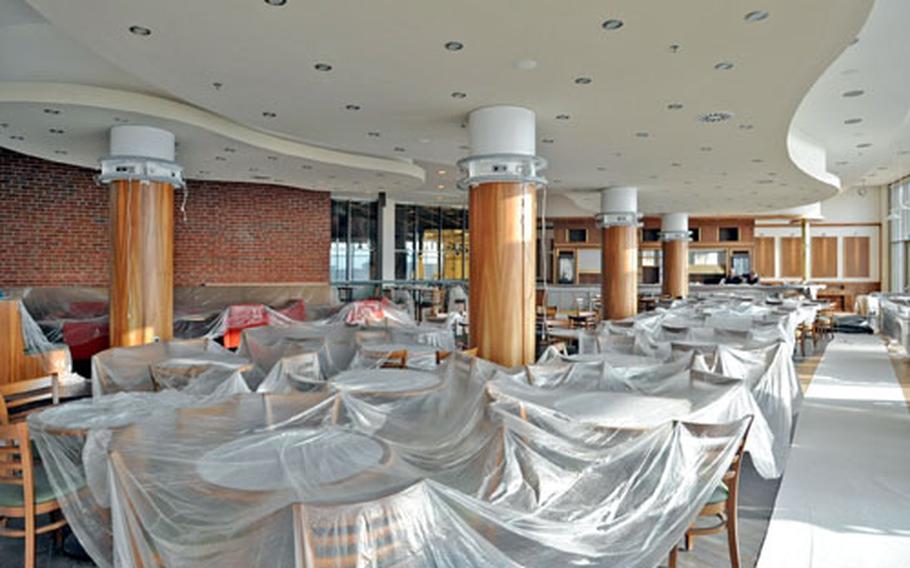 The sports bar at the Kaiserslautern Military Community Center is almost finished, and officials are looking for a vendor to run it. It will have big-screen television, Internet hot spots, indoor-outdoor seating and a view of the passenger terminal and runway. (Michael Abrams / S&S) 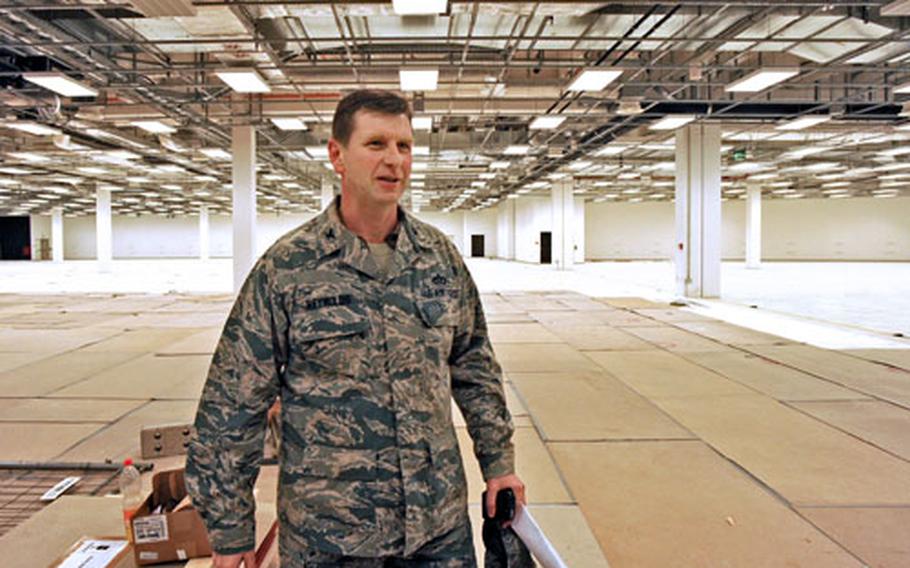 Col. David Reynolds, chief of the German Construction Division at Headquarters U.S. Air Forces in Europe, talks about the Kaiserslautern Military Community Center while standing in what will be the Army and Air Force Exchange Service&#39;s PowerZone when the construction project is completed. (Michael Abrams / S&S) One of the 350 rooms in the lodging facility at the Kaiserslautern Military Community Center. Air Force officials are currently doing final inspections on the hotel, which will be one of the first KMCC facilities to open. (Michael Abrams / S&S) The two-story climbing wall at the Kaiserslautern Military Community Center will be part of the Outdoor Recreation Center when the project is finished. Officials expect Outdoor Rec to be one of the first facilities in the KMCC to open. (Michael Abrams / S&S)

The Defense Department&#8217;s 844,000-square-foot mall-hotel complex could welcome its first customers this spring with the goal of being fully operational by early fall, Air Force officials say.

But with the opening date of the Kaiserslautern Military Community Center a moving target ever since construction began in 2003, Air Force officials are cautious about any &#8220;open-for-business&#8221; projections.

In November, LBB spokesman Markus Ramp said the agency expected to complete construction on the sprawling facility by February. Last week, he said the company plans to turn over the center to the Americans at the beginning of April.

Air Force officials plan a phased opening after they get the keys. Outdoor Recreation, with its two-story climbing wall and about five times the space it currently has, is expected to open first, followed by the 350-room, eight-story hotel across from the passenger terminal, according to Reynolds.

The last portion to open, due to the sheer volume of inventory, will be the 165,000-square-foot AAFES main store, officials said.

"For the hotel, we&#8217;re doing final inspections now," Reynolds said late last month. "With the mall itself, we&#8217;re a little further behind."

Repairs to fix a series of major construction errors are either finished or nearing completion, Reynolds said.

Flammable kitchen duct seals have been replaced. The leaky, eco-friendly roof over the hotel has been fixed while the portion over the mall is still under reconstruction and should be finished this spring, Reynolds said.

As for cracks discovered in the floor, those are still being patched, too. Reynolds stressed that the cracks were not in the foundation, but in overlying concrete floor slabs, and did not compromise the structural integrity of the building. LBB spokeswoman Gabriele Grommes said Thursday that 27 cracks were found throughout the nearly 10 acres of floor space.

Air Force officials insist much progress has been made on the project since construction almost grounded to a halt nearly a year ago.

"Difficult contractual and construction management issues caused the work force to dwindle to a handful of local German contractors," USAFE noted in a recent online story about the project. "Plans to step up the pace were on the table but had not yet materialized. That situation has improved significantly over the last eight months."

Despite those strides, unresolved issues linger. Still unknown is how much the finished KMCC will end up costing U.S. taxpayers. Reynolds said the project will come in below the projected $170 million construction budget authorized by Congress, but that figure that does not include repairs to the roof and kitchen ducts.

The German government last year provided pre-financing so major repairs could be made &#8212; an amount of up to 25 million euros, or about $32 million at current exchange rates &#8212; according to a statement USAFE Vice Commander Maj. Gen. Marc Rogers made to the House Committee on Oversight and Government Reform last June.

While the German government expects to get that money back, "it does not expect to do so directly from the U.S. government," Rogers said then.

But Grommes, the LBB spokeswoman, said the company has asked the German court to start an independent review of what caused the problems and who will be held responsible for the cost of repairs.

"Our intention is we pay for our floor once," Reynolds said, adding that goes for the other major repairs. If any issues do go to German court, it would be between the German government and contractors, "not between us," he said.

Meanwhile, allegations of fraud involving suspicious change orders with the project are still being investigated, according to Steffen Kuestner, Germany&#8217;s leading prosecutor investigating the KMCC.

"Since quite a number of changing orders had already been examined and up to now only four raise questions, it is not the big fraud case as first assumed," he said. "Nevertheless we cannot definitely substantiate whether or not and, if yes, on what scale fraud was committed until all of the 400 changing orders have been carefully examined."

Last June, Democratic Rep. Henry Waxman, whose Oversight and Government Reform Committee has held two hearings on the KMCC&#8217;s troubles, noted in a news release that several U.S. officials involved with the project are being investigated for "dereliction of duty and bribery."

When queried Friday about the investigation, USAFE spokeswoman Darlene Cowsert wrote in an e-mail "that it would be inappropriate to comment as the investigation is ongoing." She referred all questions to the Air Force Office of Special Investigations.