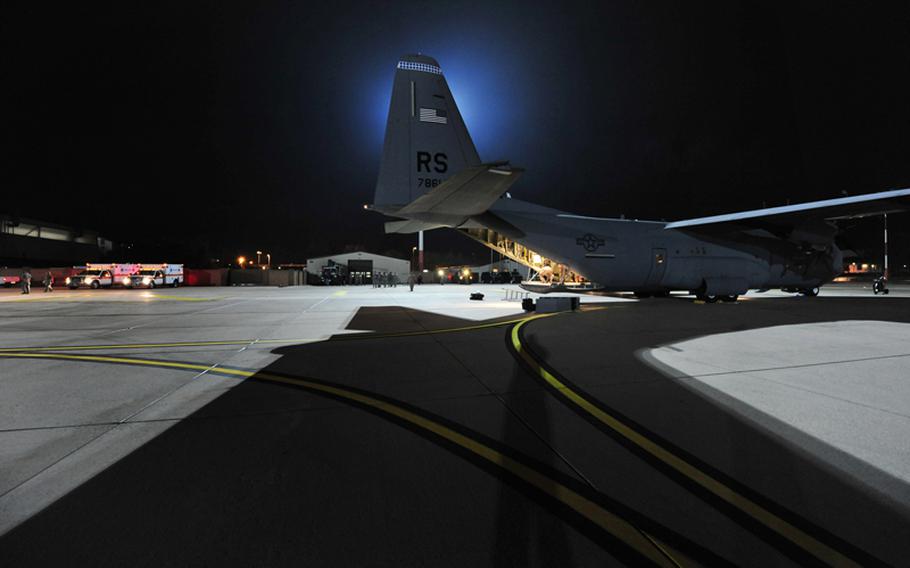 KAISERSLAUTERN, Germany &mdash; The city of Kaiserslautern will no longer measure aircraft noise from planes flying in and out of Ramstein Air Base.

The measurements cost the city 40,000 euros a year, and showed that, in many cases, planes were not the worst offenders in terms of noise level, the Rheinpfalz newspaper reported Friday.

Stefan Kremer, head of the city council environment committee told the paper that the city plans to sell three of its four noise monitoring stations. One will be stored in case of need.

The city had been measuring aircraft noise levels since the late 1970s, the Rheinpfalz reported. The oldest, installed at the Westpfalz-Klinikum hospital downtown, found that helicopters and sirens were louder.

The decision to end the measurements was driven not only by the cost but also the lower number of flights than anticipated, the paper reported.

Kilian Bluemlein, a spokesman for the 86th Airlift Wing at Ramstein, said there is no limit set on the number of flights allowed in and out of Ramstein. &ldquo;What we have to be compliant with is the level of noise.&rdquo;

The number of noise complaints lodged with the base has dropped by half over the last seven years, from about 66 a month in 2006 to 33 a month now, according to Air Force figures. Nevertheless, Kaiserslautern&rsquo;s suspension of its monitoring operation was a surprise, Bluemlein said. Base officials learned of the suspension as most people did &mdash; through the newspaper, he said.

Blumlein said that the 33 complaints the base receives on average each month often come from local officials calling on behalf of angry residents. Sometimes, though, the same people call and complain repeatedly.

&ldquo;There are months when, for example, we have 20 complaints, and all 20 complaints have been posed by three people,&rdquo; Blumlein said. There is a relatively small group of &ldquo;very noise-sensitive people and they are not shy and bashful to let us know about their frustration.&rdquo;