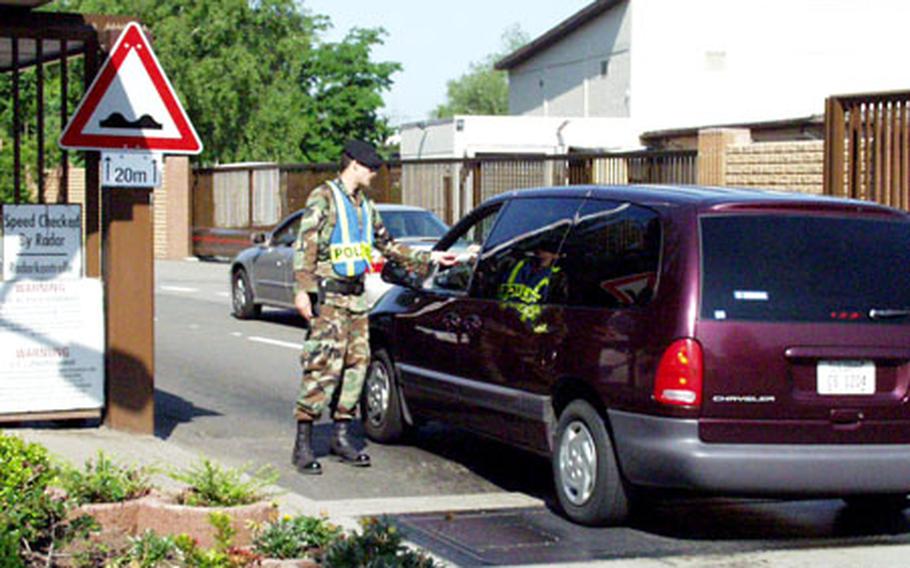 Senior Airman Jonathon Johnson with the 569th U.S. Forces Police Service checks an ID card Wednesday at the entrance to the Air Force’s Vogelweh installation in Kaiserslautern, Germany. The Vogelweh gate will be closed on June 20 for about eight weeks. (Steve Mraz / S&S)

On June 20, work will begin to add force protection elements to the west gate at Ramstein Air Base and the main gate at Vogelweh.

The construction, which is expected to last eight weeks, will likely snarl traffic around the gates, so alternative entrances and exits will be available.

Work on Ramstein&#8217;s west gate will be conducted in phases so portions of the entrance will remain open during construction, said Samer Karmi, chief of engineering and construction for the Air Force in the Kaiserslautern Military Community.

Also, some traffic will be routed through the large-vehicle inspection area near the west gate to enter Ramstein. An exit gate near Ramstein American High School will also be opened during the summer project to ease traffic leaving the base.

Karmi recommended that drivers use Ramstein&#8217;s east gate, car pool and stagger entry and exit times. Ramstein&#8217;s Harmon gate may be opened to alleviate traffic during construction, he said.

At Vogelweh, an entrance prior to the main gate and off to the right will be opened. Traffic will enter the installation on the road that skirts the BXtra store and Main Street USA Food Court parking lot.

An additional exit gate will be opened at the end of Washington Square near the Vogelweh fire department. That exit will allow vehicles to turn right only onto B40.

Motorists wanting to take a left onto B40 toward Landstuhl must use the Pulaski Shoppette gate.

Traffic coming onto Vogelweh peaks between 7 a.m. and 8:30 a.m. Traffic leaving Vogelweh hits a high point between 3 p.m. and 5 p.m., Kuykendall said. She assured motorists the situation will be handled.

Work is starting June 20 because school will not be in session, and more people take vacation during the summer, cutting down on-base traffic, Karmi said.