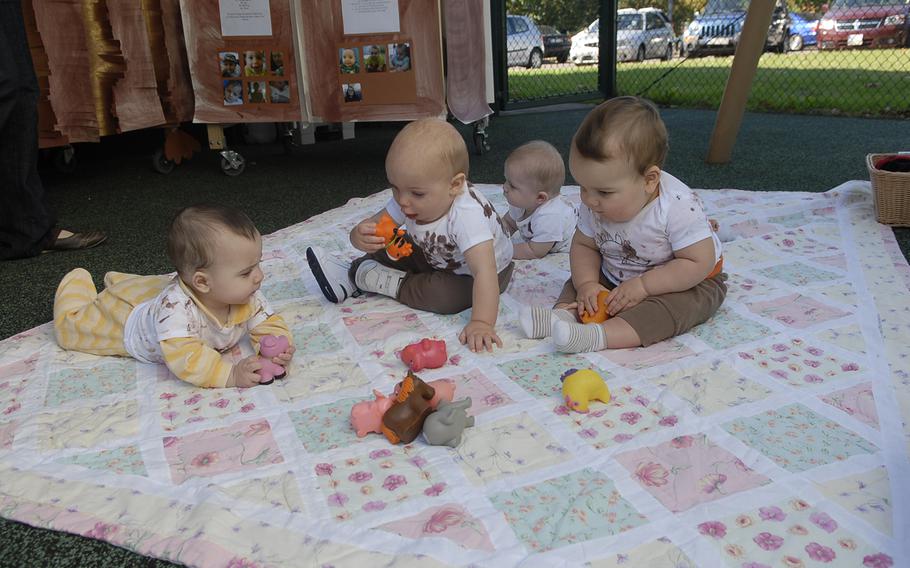 Army and Air Force officials said this week they’ve had to make some adjustments to their child care programs because of the hiring freeze.

Officials with U.S. Army Garrison Rheinland-Pflaz said in a statement Tuesday that effective immediately, the garrison’s Child and Youth Services programs had stopped offering hourly care, though existing reservations would still be honored.

The garrison has also put an immediate freeze on child care wait lists and will not fill vacant spaces, the garrison’s statement said.

The program changes are due to the inability to fill critical staff vacancies for child care services as a result of the hiring freeze.

All garrison Child Development Centers are affected. They include two centers on Landstuhl post, those at Miesau and Sembach, and the Smith and Wetzel centers at Baumholder.

“To reduce any kinds of hours and services that affect our military families is always a very tough decision and only made as a last resort when there are no other options available,” Col. Keith E. Igyarto, U.S. Army Garrison Rheinland-Pfalz commander, said in a statement. “Unfortunately these steps are necessary with the shortfall we are currently experiencing in child care providers at our facilities. We understand that child care is a critical quality of life program and we’ll continue to explore ways to work together with our community to lessen the impact of these temporary adjustments as much as possible.”

President Donald Trump instituted an immediate, 90-day governmentwide hiring freeze on Jan. 23. Though exemptions were later allowed for key positions identified in the military, including child care workers, base installations must request higher-level exemptions for those positions.

It’s not clear why those waivers are taking so long to get approved.

Two Army bases last week — in Wiesbaden and Fort Knox, Ky. — announced similar reductions in child care services. Officials at each installation said staffing shortages due to the hiring freeze were driving the changes. The Army immediately approved exemptions for a combined 75 positions after the very public announcements at those bases, but child care programs were still expected to be short-staffed because of the time needed to hire workers.

Garrison officials in Kaiserslautern said bulk exceptions to the hiring freeze for child care providers are being staffed through Installation Management Command to Department of the Army headquarters.

Bill Costlow, a spokesman for Installation Management Command, said Wednesday morning IMCOM had been cleared to hire 3,224 child care workers, across the Army. The agency has also achieved one-day turnaround on approvals between its headquarters and the Secretary of the Army’s office, he said, which will significantly improve services at the Army garrisons.

But Army officials in Kaiserslautern said staffing shortages are expected to continue even if exemptions are granted, since the normal hiring process can take several weeks to months, depending on an applicant’s location and the required security and background checks.

Other measures are expected to be implemented within the next two weeks because of the staffing shortages. These include stopping the following: Parent’s Day Out and Parent’s Night Out programs; group child care requested for meetings and events (unless already scheduled); and care to those who are not single or dual-working parents. Any spaces vacated will be filled by children of single or dual-working parents.

Garrison officials said they were also looking at ending several part-day programs, including Strong Beginnings, by April 1, if the staffing situation hasn’t improved.

The effects of the hiring freeze could reach as far as into the summer, with the garrison considering stopping new enrollments in School Age Center summer camps, too.

In the Kaiserslautern area, the Air Force also runs two Child Development Centers, one at Ramstein Air Base and one at Vogelweh. Army families may use these, but Air Force centers have temporarily paused new enrollees, officials said.

The move is “out of an abundance of caution while we seek a formal exemption to the hiring freeze,” Kelly Sanders, a spokeswoman for the 86th Airlift Wing at Ramstein, said in a statement.

“This is about average for this area and time of year, and a majority of the children are utilizing alternate forms of care at the moment,” she said, noting that about 11 of those families report having no alternate form of care.

Formal exemptions to the hiring freeze have been submitted, Sanders said. Parents are encouraged to use Family Child Care providers and hourly care options while awaiting spots in the CDC, she said.