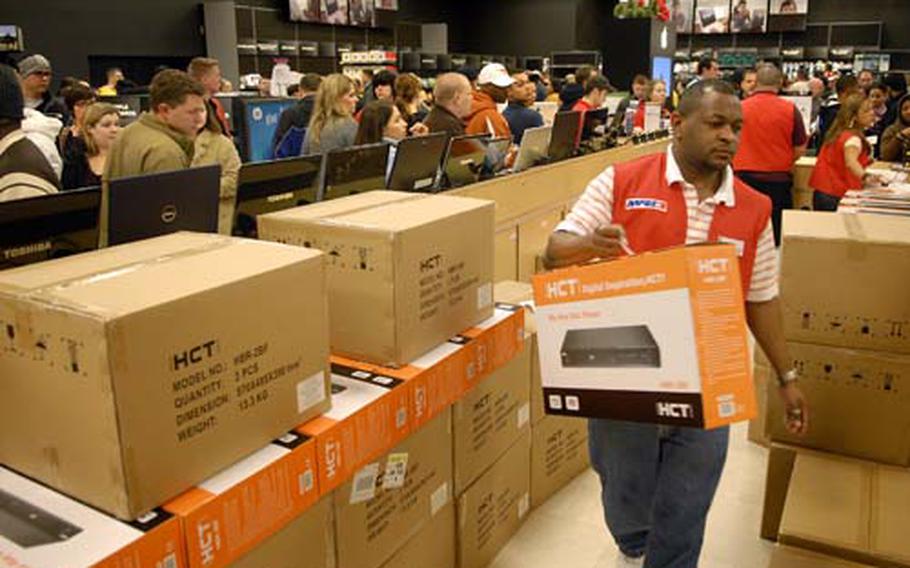 Eric Robinson passes out blue ray disc players on sale for those who showed up early on "Black Friday" morning at the Kaiserslautern Military Community Center on Ramstein Air Base, Germany. Shoppers started lining up as early as 11 p.m. on Thursday in hopes of a deal. The exchange opened at 7 a.m. on Friday. (Ben Bloker / S&S) Alex Lowden, 8, enjoys some Nintendo DS time while shoppers wait for their items on "Black Friday" at the Kaiserslautern Military Community Center on Ramstein Air Base, Germany. (Ben Bloker / S&S) 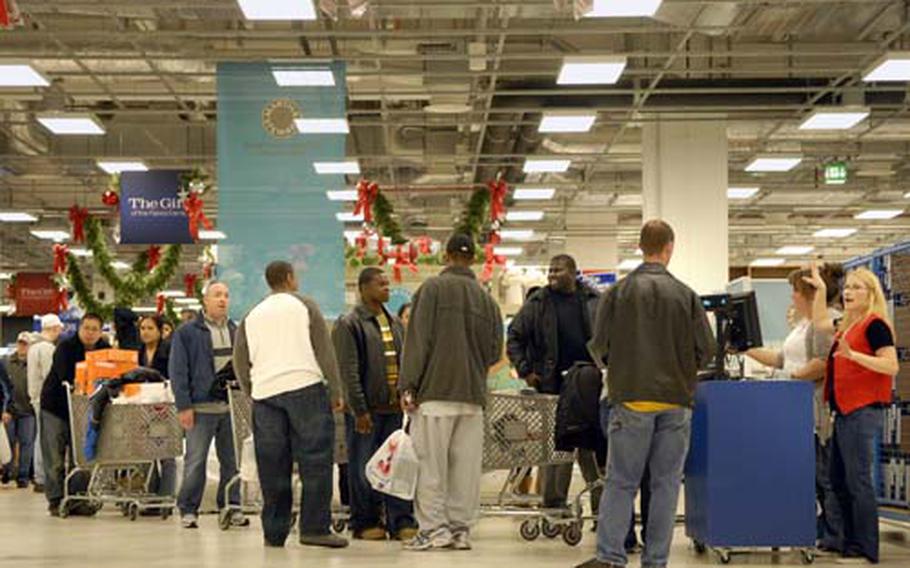 A final line...Shoppers line up to purchase laptop computers on sale on "Black Friday" morning at the Kaiserslautern Military Community Center on Ramstein Air Base, Germany. (Ben Bloker / S&S)

Related Story: Some Vogelweh residents still feel left out in the coldRAMSTEIN AIR BASE, Germany &#8212; Customers are flocking to the Kaiserslautern Military Community Center, pushing sales figures skyward and increasing traffic on base.

In October, the first full month the giant shopping mall, hotel and entertainment center was open, the KMCC recorded more than $12 million in sales, a 22 percent increase over October 2008 combined sales between the now-shuttered Ramstein and Vogelweh exchanges, according to figures from the Army and Air Force Exchange Service.

Compare that to Grafenw&#246;hr, the second largest military exchange in Germany, where October sales totaled $3.79 million.

More staggering is the exchange of dough in the KMCC food court, where, in October, sales totaled close to $1.3 million, up 83 percent from October 2008 sales in the old Ramstein and Vogelweh food courts, AAFES officials said.

"It has been a success," said Army Lt. Col. Wayne Marotto, AAFES-Europe spokesman of the KMCC. "It&#8217;s generating a lot of revenue for Morale, Welfare and Recreation and the store."

The KMCC in October generated $57,784 in dividends for MWR programs, nearly $10,000 more than October 2008 funds from the Ramstein and Vogelweh exchanges, according to AAFES. Marotto said roughly two-thirds of AAFES earnings are paid into MWR programs.

The facility is drawing shoppers from beyond the Kaiserslautern area. On a recent midweek holiday, a sampling of passers-by in the mall found customers from Stuttgart, Baumholder, Wiesbaden and Heidelberg, among other places.

"There&#8217;s more of a variety," said Navy spouse Tracy Perez, who made the two-hour drive from Stuttgart, Germany, on Veterans Day.

Since the complex opened, inbound traffic on Ramstein has jumped by as much as 34 percent on weekdays and 73 percent on weekends, according to information from the 86th Security Forces Squadron, which maintains automated traffic counts on base.

While the KMCC&#8217;s novelty may have worn off slightly, the center still buzzes with customers most weekends and holidays. On a recent Saturday night, for instance, the wait for a meal at Macaroni Grill was one hour.

Battling the crowds during peak shopping hours has been a chief complaint among some shoppers.

With the other two area exchanges closed, the KMCC store is the only game in town. Lucas said it took 10 minutes to find a parking space.

The KMCC has 2,200 parking spaces, including 182 designated for employees, and 350 in the parking garage by the hotel.

One of Lucas&#8217; gripes is the effort involved in going to the movies.

The KMCC has four theaters &#8212; two with 80 seats, and two with 160 seats. The Ramstein Nightingale and Hercules theaters, no longer used by AAFES to play movies, seat 385 each, while Vogelweh Galaxy, still open on a limited basis, has a seating capacity of 675, according to AAFES officials.

"Once you&#8217;ve been to the East Coast, you don&#8217;t have a problem" with crowds, said Air Force Tech. Sgt. Anthony Grzegorczyk, who lives in Kaiserslautern. His wife, Kim, said the lines in the new exchange are nowhere nearly as long as they used to be at the old exchanges. "You don&#8217;t wait in here," she said.

Marotto said the exchange has 22 checkout lines among three entrances. On Veterans Day, the lines were short and quick, despite a busy store.

Anthony Grzegorczyk said despite the bigger store, he&#8217;s run into the problem of products he&#8217;s looking for being sold out.

But by and large, shoppers said they loved their new mall.