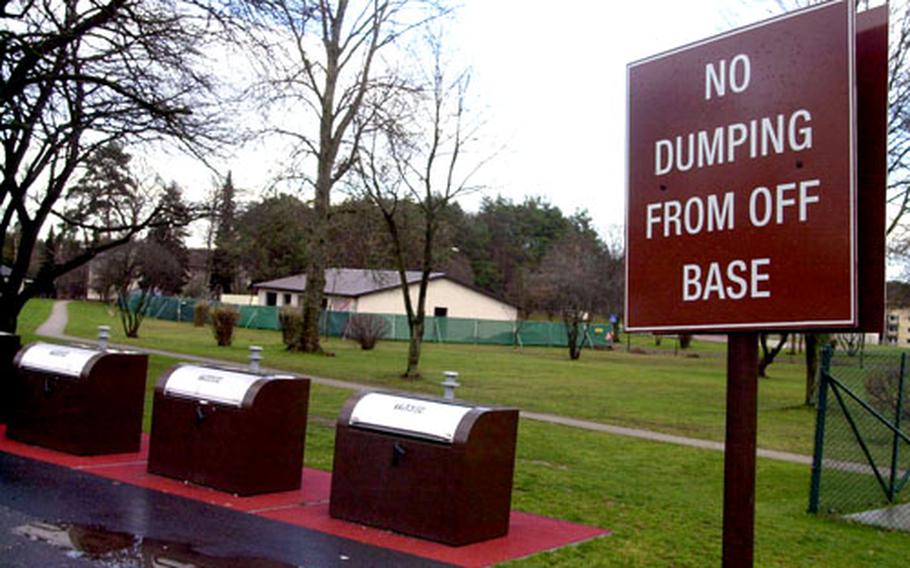 A sign at Kapaun Air Station in Kaiserslautern, Germany, warns off-base residents against dumping on base. So many of them are using base Dumpsters that security forces have threatened to arrest violators and charge them with theft of government services. (Scott Schonauer / S&S)

KAISERSLAUTERN, Germany &#8212; Base residents in the Kaiserslautern area have been talking trash for more than a year.

Not to each other. They&#8217;re talking about the trash dumped by Americans living off base.

So many people are doing that at Vogelweh housing that some Dumpsters overflow with smelly garbage right before pick-up days.

Resident Tanja Keith said it has been a huge problem. Those who live in the housing are responsible for keeping the area clean and often get blamed for the mess.

The problem got so bad a few months ago that many people were infuriated and complained to military police.

Signs were posted over a year ago warning offenders that is illegal to dump their off-base refuse on post and violators who got caught received tickets.

But the problem lingered like the smell of rotting refuse.

One of the reasons some people say they dump trash off-base is because Americans have more garbage than their local villages will pick up.

Most villages require residents to separate their garbage for recycling and then dump the rest of the garbage about once every two weeks. Many of the German trash cans &#8212; which are roughly the size of a large golf bag &#8212; only hold about three medium-sized bags of trash. Larger or additional cans are available, but residents must pay extra for those.

What many Americans living off post do is haul the extra garbage in their car and dump it on their way to work or the base exchange.

Catching the off-base dumpers has been a challenge.

But some angry residents took action into their own hands, going as far as sorting through the trash of suspected illegal dumpers. Military police found bills and other information in the trash that traced people to off-base addresses with the help of housing officials.

It wasn&#8217;t until base police threatened to arrest violators that they seemed to get everyone&#8217;s attention.

The military argues it can arrest offenders because they receive an allowance for utilities and services.

About a month ago, the 569th U.S. Forces Police Squadron warned in the base newspaper, the &#8220;Kaiserslautern American,&#8221; they would arrest off-base residents who dump their trash on post, charge them with theft of government services and release them to their unit&#8217;s or sponsor&#8217;s command or first sergeant.

The forewarning seems to have worked. Complaints are down even though nobody has been arrested.

Airman 1st Class Nathan Barclay has only lived on base for four months. He has seen some of the Dumpsters full, but he said it doesn&#8217;t appear to be a problem.