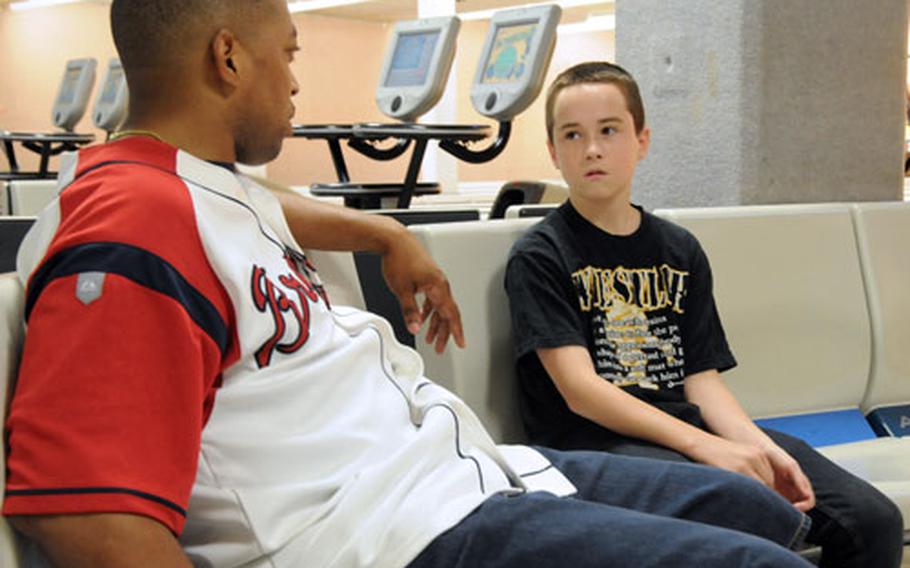 Air Force Master Sgt. Alando Respress, Air Force Smart Operations for the 21st Century process manager for the 18th Wing on Kadena Air Base, Okinawa, talks with Price Berill between games at the Emery Lanes bowling alley on base. The two have been teamed up for about six months, and get together twice a week. (Matt Orr / S&S)

KADENA AIR BASE, Okinawa &#8212; Price Berill&#8217;s eyes light up as he spins around after knocking down his spare. A slap on the back coupled with words of congratulations spring from his bowling partner&#8217;s mouth.

Both appear quite serious about the game; they own their own bowling shoes.

Although there is a bit of difference in the bowling scores and their ages, both are here to connect, bond and talk. Bowling just makes it more fun.

Price was one of the first kids enrolled in the Kadena Youth Mentor Program, which is modeled after the Big Brothers Big Sisters program. The Kadena program, now with 22 enrolled, was developed by Elaine Daly-Rath, Air Force Installation Dependent School liaison, and is open to children of U.S. military, Department of Defense civilians and civilian contractors on Okinawa.

Without a father figure around, Price&#8217;s life took a turn for the better when he was teamed up with Respress about six months ago. The two recently met up at the Emery Lanes Bowling center on Kadena Air Base to celebrate Price&#8217;s 15th birthday.

They meet on a regular basis and mainly talk about things Price wants to talk about.

&#8220;We talk about everything,&#8221; Respress said. &#8220;Some of our discussions include family, friends, high school, college, recent events, sports, coping mechanism, short-term/long-term goals, road-blocks and challenges in life.&#8221;

And while the program is geared to help the children, it has meaning for mentors as well.

Between games, Respress hands Price a birthday present. A smile stretching across his face, Price holds up the two shirts he has just received.

Putting down the shirts, Price reaches for his ball.

Daly-Rath said she expects the program to grow as more parents inquire about it now that school has started.