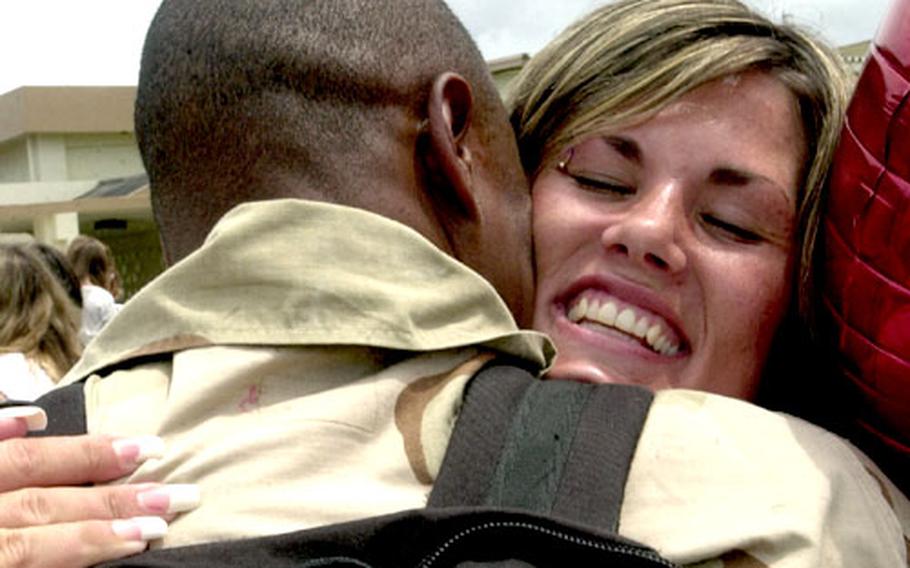 Melinda Coleman gives her husband, Air Force Staff Sgt. Corey Coleman, a big hug Thursday upon his return to Kadena Air Base from a three month deployment to the Mideast. (Fred Zimmerman / S&S)

Melinda Coleman gives her husband, Air Force Staff Sgt. Corey Coleman, a big hug Thursday upon his return to Kadena Air Base from a three month deployment to the Mideast. (Fred Zimmerman / S&S) Kadena Air Base fire personnel hold up a sign welcoming home some of their comrades from deployment. They also lined up several trucks and flashed the lights and blew horns and sirens. (Fred Zimmerman / S&S) 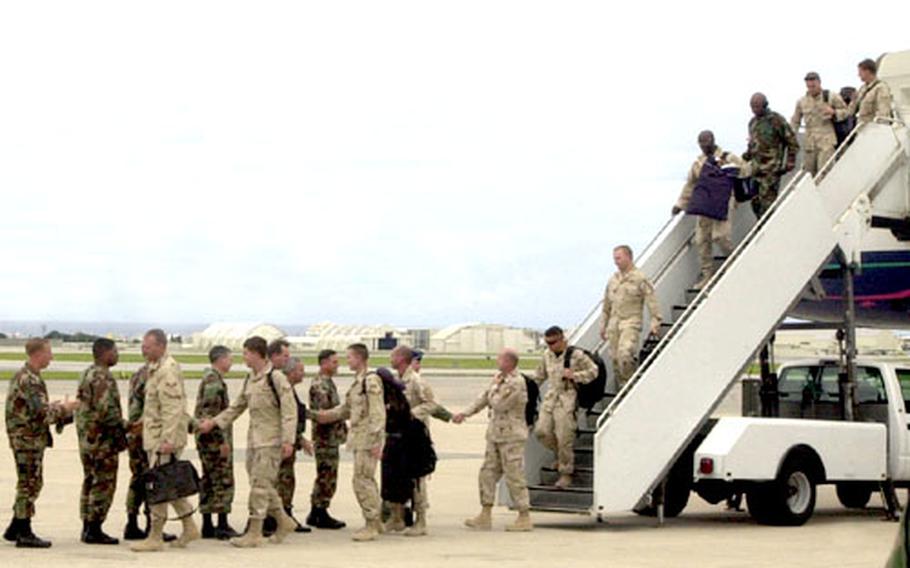 Servicemembers leave the plane at Kadena on their way back from deployment. (Fred Zimmerman / S&S) KADENA AIR BASE, Okinawa &#8212; Servicemembers from Yokota and Kadena air bases were back on familiar turf Thursday, fresh off a deployment in which they boosted forces fighting the war on terrorism, primarily in Iraq and Afghanistan.

A passenger plane routed straight from Southwest Asia first stopped at Kadena Air Base on Okinawa, then touched down at Yokota just before 4 p.m. In all, about 125 airmen returned to the Pacific.

Most left three months ago, as part of a scheduled rotation within the Air Force&#8217;s Aerospace Expeditionary Force cycle. All filled various support roles in Operation Iraqi Freedom and Operation Enduring Freedom, spread across the Middle East region.

Approximately 35 Kadena Air Base servicemembers were among those who had worked in support of Operation Iraqi Freedom. Most of the personnel are from the 18th Civil Engineer Squadron. Other airmen who work in 18th Wing logistics, operations, communications and safety also returned.

As the Kadena troops stepped off the plane just after noon, they were greeted by a long line of well- wishers from the 18th Wing. Family members had to curb their excitement as their loved ones shook hands with more than a dozen staff members from the base.

The families watched from a coned off area just off to the side of the aircraft. Several excited children bolted for their father&#8217;s arms, but were quickly stopped and sent back to the waiting area by security personnel. The children slowly walked back to their mothers with tears building in their eyes.

Stars and Stripes was not allowed to interview troops as they left the plane. Kadena officials said the servicemembers would&#8217;t be available for comments immediately after their return.

As the airmen completed the greeting line, they rushed over to the waiting area where husbands and wives kissed, mothers and fathers received large hugs and at least one father had to remind his child who he was.

&#8220;Do you remember who I am?&#8221; asked Staff Sgt. Corey Coleman to his 1-year-old daughter Gabrielle. At first she shied from him but eventually he received a kiss on the nose.

Two of his other children &#8212; 4-year-old Corey Jr. and 3-year-old Alexis &#8212; had no problem recognizing Daddy: They were two of the children who tried to reach their father prematurely. While her siblings bolted for dad, 6-year-old Victoria stood by mom holding two balloons to welcome him home.

Coleman, a firefighter with the 18th Civil Engineer Squadron, was deployed to Talil Air Base for three months.

His wife, Melinda, said there were good times and bad times while her husband was gone, but there was lots to keep the family busy.

Victoria said that while she missed her dad a lot, swimming helped pass the time. Melinda said the family stayed in contact though: Corey Sr. would call about every other day and they e-mailed one another every day.

While single-handedly running a household and taking care of four kids was tough, Melinda said she received lots of help from neighbors and friends. She also received help from her husband&#8217;s mother, sister and two cousins who visited for three weeks.

Melinda said she was a little worried that the deployment was going to be extended, but she was happy to hear it was kept on schedule.

&#8220;I officially heard they were coming home about a week ago,&#8221; she said. She said her husband called on Wednesday night to tell the kids he was on his way home. She said they hadn&#8217;t told the children for fear of an extension, which would have upset them.

While it was good to have him home, Melinda admitted that she was worried about her husband while he was gone.

Later that afternoon at Yokota Air Base, returning airmen similarly were reuniting with their families and buddies.

When Derek Allar, a senior airman with Yokota&#8217;s 374th Civil Engineer Squadron, finally located his family Thursday, the initial reunion between him and his son was a bit awkward.

A few of his buddies turned out to greet him.