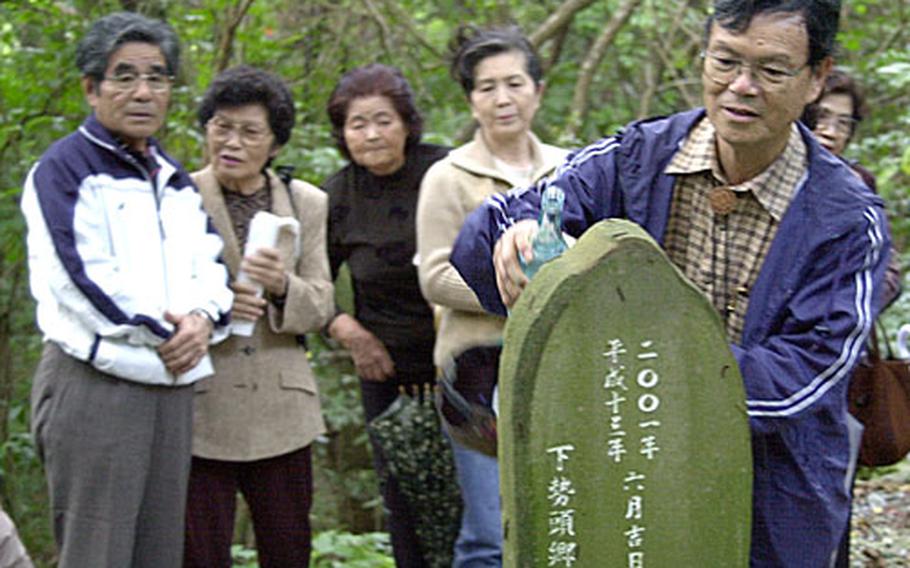 KADENA AIR BASE, Okinawa &#8212; The last time Kiyuna Yoshiko saw these lands was when the U.S. and Japan were at war.

Yoshiko, 86, lived in a house near where Chapel One now stands. She remembers playing with her friends over a bridge, long since demolished, that ran along what is now Douglas Boulevard.

Yoshiko was one of about 30 Okinawans visiting Kadena Air Base on Wednesday to pay respects to their ancestors at sites they consider sacred.

Some airmen pass the sites on base nearly every day without knowing it; a plaque commemorates one such site on the road leading to Kadena&#8217;s golf course.

Others are shrouded by swaths of old banyan trees. The trees, whose roots twirl like spaghetti through patches of jungle, are also revered by many of the visitors.

One such cluster lies at the end of a cul-de-sac in the Chula Vista housing area, just beyond the homes of a few Air Force colonels.

Brush away a few vines, walk about 50 yards and visitors will find a place, well-guarded by mosquitoes, that Okinawans have visited for at least 250 years.

Takashi Hanashiro, a former high school principal living in Ginowan City, left a flower bouquet at the foot of a stone memorial there. He poured sake over the headstone, then kneeled and prayed.

Most were farmers who celebrated each harvest, Hanashiro said.

Each February, before World War II, Okinawans gathered at Kadena sites like Ashibina-ji for elaborate festivals.

Young men marched from six directions and converged at the sacred site, hoisting banners decorated with flowers. Some made food or played the sanshin, a guitar-like instrument with three strings. Others dedicated dances to the god of amusement.

About 300 Okinawans participate in trips organized by Kadena community relations to see these sites annually, a base spokeswoman said. The base has long organized site visits, which were temporarily suspended for security reasons after the Sept. 11, 2001 attacks on the United States.

Sites like Ashibina-ji mean something to everybody on the trip; other sites are more personal and may be nothing more than a patch of grass where a home once stood. People look at a map to determine a location, picture the land as it once was, then drop to their knees and say a prayer for their families.

The visits are emotional moments for Okinawans like Yoshiko, who in their lifetime have seen what was once an island of sleepy fishing villages go through so many changes.