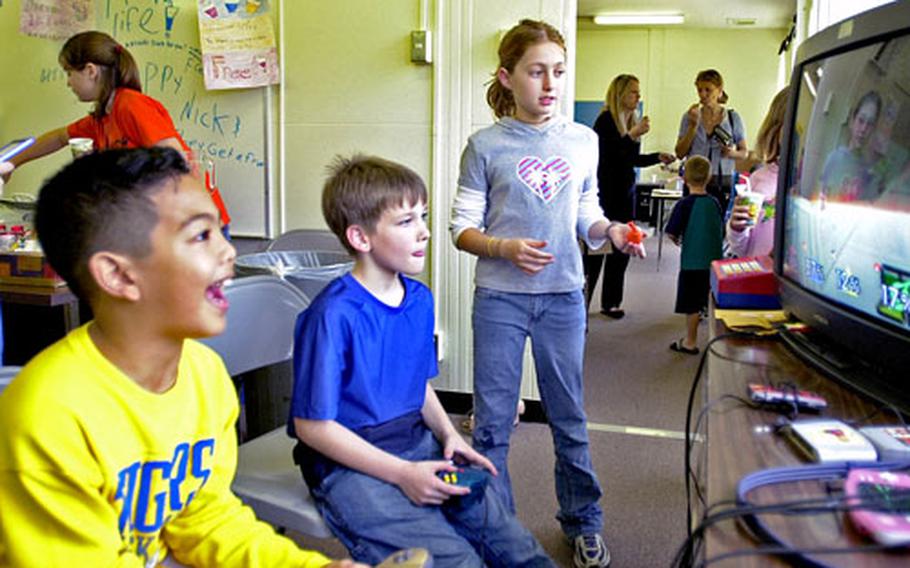 Isabel Hagopian, right, watches as Ricky Arellano, left, and Peter Trusty play video games at her “business” at Stearley Heights Elementary School on Kadena Air Base. The third- and fourth-grade multi-age classes at the school currently are taking part in a “mini-society” economics program in which they create their own businesses and run them. (Fred Zimmerman / S&S)

KADENA AIR BASE, Okinawa &#8212; Money rapidly exchanged hands as shoppers hurried from store to store checking out the latest offerings of young entrepreneurs.

But while the various denominations of &#8220;Yokkos&#8221; and &#8220;Dragon Claws&#8221; won&#8217;t get you anything at the base exchange, they can purchase everything from handmade bracelets to smoothies at Stearley Heights Elementary School.

Students in Judy Haynes&#8217; and Teresa Lathem&#8217;s third- and fourth-grade multi-age classes have been getting lessons on the basics of economics by setting up their own societies, complete with businesses and currency. Haynes&#8217; class, &#8220;Animaniacs World,&#8221; uses the Yokko, while Lathem&#8217;s students, the &#8220;Metal Dragon Palace&#8221; society, created the Dragon Claw.

The classes started the project in December by learning the basics of economics &#8212; everything from supply and demand to scarcity, Lathem said. The two societies then began to earn money for their economies.

Haynes said students could earn up to 29 Yokkos or Dragon Claws per day for two weeks, but they had to meet certain terms like being seated on time and keeping areas clean.

Students also created their own businesses, either alone or with a partner. Business licenses then had to be applied for and advertisements made, Haynes said.

The shops open for business one day a week for 45 minutes and each sale day begins with paying rent, Lathem said.

Haynes has used the economics project from third through sixth grade for six years. She said she learned about it when at Southern Illinois University-Edwardsville, where local businessmen were concerned about high school graduates who didn&#8217;t have the necessary business skills and tools, whether dealing with customers or counting change.

The project lasts five weeks and by week three, Haynes said students were coming up with new ways to draw in business.

&#8220;You eat popcorn while watching movies, so why not eat some while playing video games,&#8221; Mary said.

For students who used parental help &#8212; whether using supplies from home or actual hands-on help &#8212; students had to pay for services rendered, Haynes said. They could pay with their created money, or with manual labor around the house.

Third-grader Calvin Henderson paid his mom by helping her babysit. She helped his paper airplane business by putting designs on the paper he used.