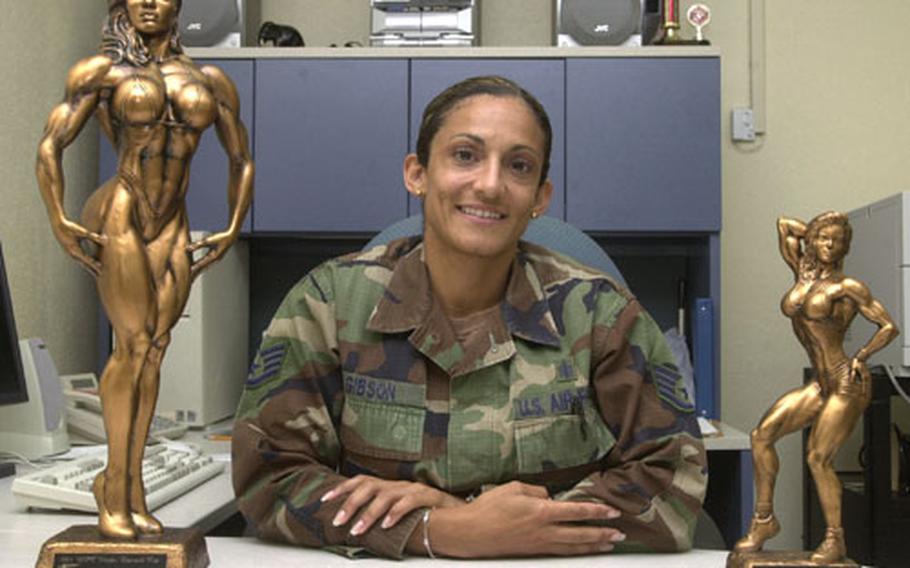 She recently returned to Okinawa from the 2004 Weider Emerald Cup Fitness Championship. In each hand was a gold-colored trophy featuring a muscular woman &#8212; one for first place in the women&#8217;s fitness, short division, and another as the overall women&#8217;s fitness Champion. More than 100 women took part, 11 in her division, in a competition that featured performers 5-foot-3 and shorter.

The event, which took place April 23-24 in Bellevue, Wash., is the largest amateur regional event, said Gibson. By placing first, she qualifies for the national competition. If she places in the top two there, she&#8217;ll get her &#8220;pro card&#8221; and be able to earn money at future contests as a professional.

Gibson said she was surprised to take top honors, especially since this was her first competition.

The fitness competition has three phases: two swimsuit rounds in which each woman&#8217;s physique is graded and one round in which fitness is assessed. The fitness portion has mandatory moves such as one-arm push-ups, splits and straddles, with each performer graded on strength, flexibility and presentation.

Gibson was elated to earn a spot in the top five in her division, but when her name wasn&#8217;t called shortly thereafter as the fifth- or fourth-place finisher, she had a feeling the title was hers.

Preparing for her first major competition wasn&#8217;t easy. It wasn&#8217;t until mid-February when she decided to compete, and she instantly put herself on a six-week diet.

She stuck strictly to boiled eggs, tuna, chicken, rice, salad and broccoli, treating herself occasionally to a tablespoon or two of peanut butter and rice cakes. During that time, Gibson said she ate a meal every three hours.

While the diet was tough, Gibson said, her husband, Marine Gunnery Sgt. Jay Gibson, was a big help, dieting with her and helping prepare meals for the following day.

Even more essential than dieting was getting in winning form, Gibson said. She hit the gym three times a day.

She&#8217;d get up at 4:30 a.m. to make it to the early aerobics class, and would squeeze in a quick 20-minute cardio workout during lunch. After work, it was back to the gym for weight training and practicing her routine.

&#8220;I consider going to the gym a second job, but I enjoy it,&#8221; Gibson said. &#8220;For me, going to the gym is one of the most positive stress relievers out there. Being able to control your physique and seeing what you can accomplish is satisfying.&#8221;

But Gibson isn&#8217;t sure she&#8217;ll be able to make the national competition in Las Vegas this July, she said: She used most of her leave for the last event and is worried she won&#8217;t accrue enough for the trip. She&#8217;s already applying for permissive temporary duty orders.