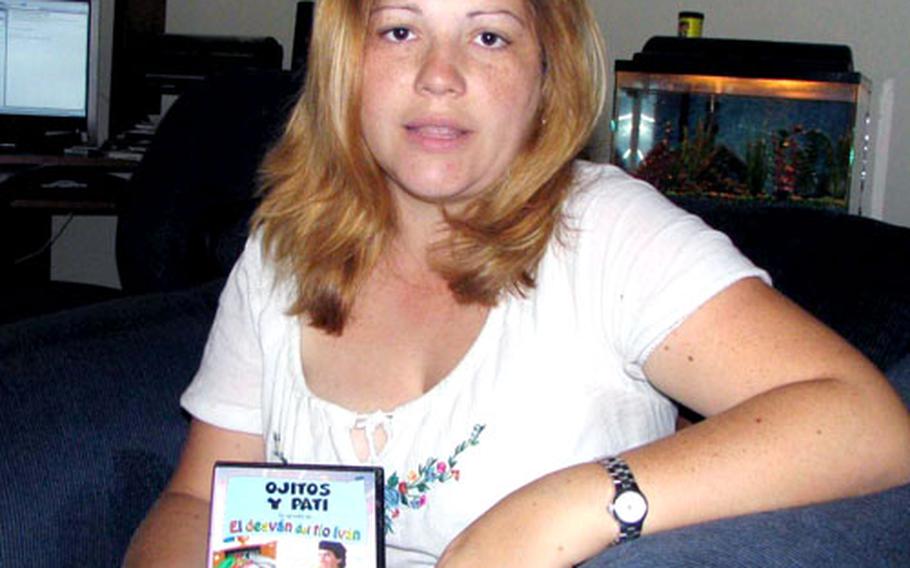 Lou Eytalis says she grew up in a controversial Christian group called The Family, also known as the Children of God. Eytalis is trying to get the Army and Air Force Exchange Service to discontinue sales of children’s videos produced by the group, which she says feauture children who were abused by church members. (David Allen / S&S)

KADENA AIR BASE, Okinawa &#8212; The sight of a children&#8217;s video on a base exchange shelf sent a flood of bad memories washing over Lou Eytalis.

Even though she was years and continents removed from her childhood as a member of the controversial Christian group variously called The Children of God and The Family, seeing the videos produced by an arm of the group sent shivers down her spine and caused her to break into a sweat.

The Family found itself in the spotlight last year when Ricky Rodriguez, the 29-year-old son of the movement&#8217;s founder and heir apparent, killed himself after murdering a former nanny. Rodriguez, also known as Davidito, had been the &#8220;star&#8221; of a 762-page picture book written by his caregivers that chronicled his childhood, including sexual play with his nannies.

In a video Rodriguez made of his suicide, he denounced his mother for forcing him to have sex with her when he was 12, according to press accounts.

When Eytalis spotted the videos in the Kadena exchange, she flagged somebody down in the store and complained.

&#8220;I was raised in the group, born in it and seeing these items that I was forced to sell &#8230; is a little disturbing,&#8221; Eytalis wrote in a complaint to AAFES. &#8220;This group is known for prostitution and have committed many instances of sexual abuse and physical abuse as well.&#8221;

Hiromi Narita, a spokeswoman for The Family in Japan, would not respond directly to Eytalis&#8217; charges of abuse, but said in an e-mail to Stars and Stripes that there were problems in the past and offenders have been &#8220;excommunicated.&#8221;

A check of overseas exchanges showed the videos are being sold only in stores on Okinawa. An Army and Air Force Exchange Service spokesman on Okinawa said AAFES will continue to sell the videos.

&#8220;While there are a variety of issues weighed when determining the product mix at the BX/PX, authorized customers, for the most part, ultimately determine what is sold in AAFES stores,&#8221; Master Sgt. Donovan K. Potter of the AAFES Pacific public affairs office wrote in response to a Stars and Stripes query. &#8220;When considering vendors, AAFES reviews the debarred list (&#8216;Excluded Parties List System&#8217;) to identify parties excluded throughout the U.S. Government from receiving Federal contracts or certain subcontracts and from receiving certain types of Federal financial and non-financial assistance and benefits.&#8221;

Aurora Production was not on the list and will continue to be sold on Okinawa &#8220;as long as authorized customers continue to purchase the materials,&#8221; Potter said.

To support her request for having the videos removed, Eytalis had another ex-member of The Family write AAFES to tell his story.

He said his wife was one of the children in the videos. &#8220;Although the videos in themselves appear to the viewer to be harmless and even deliver a somewhat peaceful Christian message, the proceeds of these videos go directly to a group that has destroyed hundreds of lives.&#8221;

Eytalis is one of nine children. She was raised in Family homes in Colombia and Puerto Rico and left the group when she was 16.

The Family&#8217;s foundation was Christian with a skewed sexual twist, she said.

Religious group: Problems in past

A spokeswoman for The Family International&#8217;s Japan headquarters near Tokyo said Aurora Production is an independent company with close ties to the religious group. However, Hiromi Narita of the Family Japan Information Center wrote in response to a query: &#8220;The videos were indeed produced by Family members and members may distribute them.&#8221;

&#8220;The videos are one of many Gospel productions that members of the Family have produced over the years to reach the world with the message of God&#8217;s love,&#8221; she said.

Narita acknowledged The Family had a problem past but asserted that protections have been put in place. &#8220;The Family&#8217;s policy for the protection of minors was adopted in 1986,&#8221; she said. &#8220;We regret that prior to the adoption of this policy, cases occurred where minors were exposed to sexually inappropriate behavior between 1978 and 1986.&#8221;

Offenders were excommunicated from the church, Narita added. The &#8220;Family is sorry if any person feels they were mistreated in any way by someone during their time in The Family &#8212; the Family&#8217;s goal is to provide a happy and safe environment for every child raised in the Family. To any Family member or ex-Family member who feels he or she has suffered any mistreatment of any kind, by anyone, we say we are truly sorry.&#8221;

Narita further noted that &#8220;the Family&#8217;s success in protecting our children and ensuring their well-being has been documented by independent and court-appointed investigations in five different countries in the early 1990s of almost 700 children living in Family communities (approximately 17% of our children). After extensive physical, psychological, and educational testing, all of the children were found to be healthy with no sign of abuse. This speaks clearly to the enforcement of policies in place to safeguard children in Family communities.&#8221;