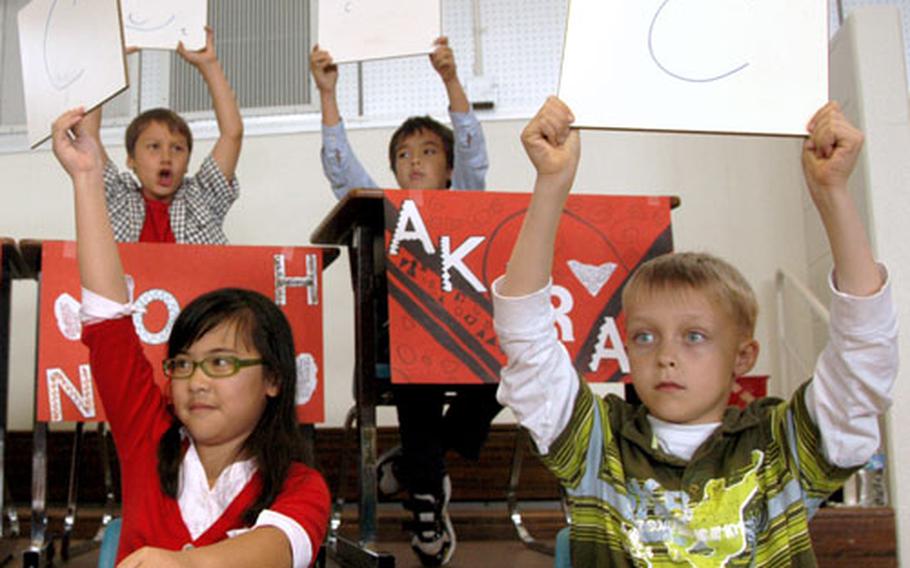 Members of the Firebird class hold up answers to a quiz question Thursday during a game of “Are you smarter than a Firebird?” at Amelia Earhart Intermediate School at Kadena Air Base on Okinawa. (Natasha Lee / S&S)

Members of the Firebird class hold up answers to a quiz question Thursday during a game of “Are you smarter than a Firebird?” at Amelia Earhart Intermediate School at Kadena Air Base on Okinawa. (Natasha Lee / S&S) 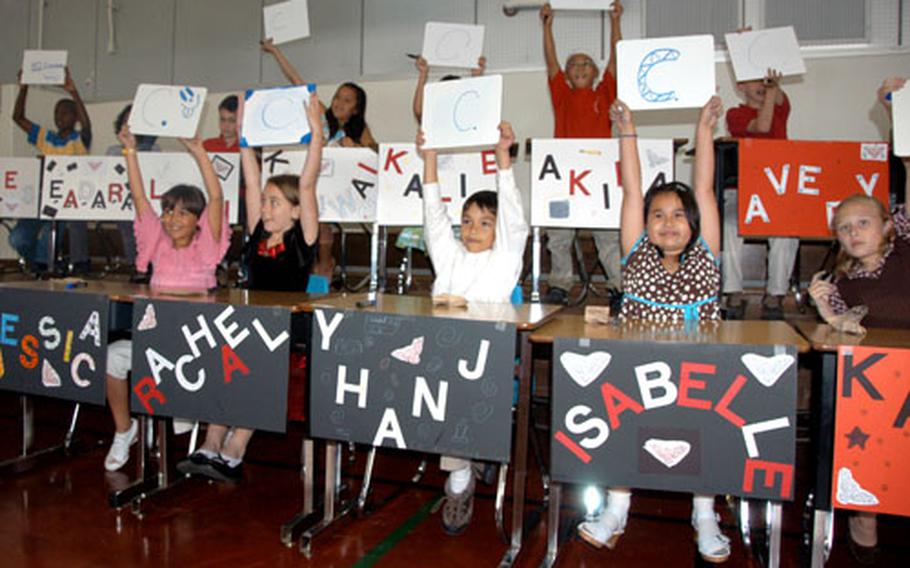 The participants in “Are you smarter than a Firebird?” display their answers to one of the questions asked during Thursday’s game. (Natasha Lee / S&S) 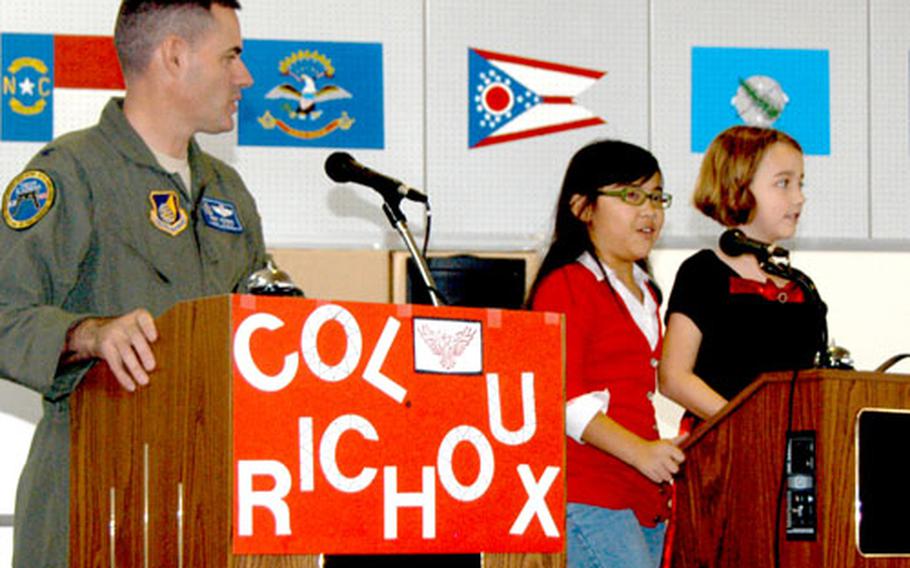 Air Force Col. Lenny Richoux, left, vice commander of the 18th Wing at Kadena Air Base, Okinawa, is introduced to two student helpers, Katrina Stebbins, a fourth-grader, center, and third-grader Rachael Foley, during a round of “Are you smarter than a Firebird?” (Natasha Lee / S&S)

KADENA AIR BASE, Okinawa &#8212; Air Force Col. Lenny Richoux may have met his match when it comes to plural possessives, third-grade science and the grammatical relationship between cause and effect.

Richoux, the 18th Wing vice commander, measured his grade-school knowledge Thursday during the quiz game "Are You Smarter Than a Firebird?" at Amelia Earhart Intermediate School.

Richoux relied on 24 students to tackle questions aimed at the third- through fifth-grade subjects in language arts, social studies, math, science and reading.

"I think they&#8217;re a lot more book smart than I am, which is good because they&#8217;re the next generation," said Richoux of his little helpers.

The school hosted its own version of the popular TV game show "Are You Smarter Than a 5th Grader?" to help prime its elementary students for the TerraNova national standardized test scheduled to start Monday. The Firebird is the school&#8217;s mascot.

In the TV show, hosted by comedian Jeff Foxworthy, adult contestants vie for a $1 million prize by answering grade-school-level questions. When stuck, contestants can call on a group of elementary school students for help.

The questions were similar to what students can expect to see on the TerraNova exam, said special education teacher Tommy Thomson, who coordinated the game.

No question was too hard for third-grader Isabelle Rice, 9, who was part of the class of students selected to help Richoux.

This question in particular was a cinch, Isabelle said:

Which one of these living things makes food from the sun? A. Rabbit B. Tree C. Bird D. Crab

"The tree. It was easy," Isabelle said.

Fifth-grader Akira Comia, 10, also part of the class, said he was stumped by a few of the third-grade reading questions.

"I forgot those," he said. "I haven&#8217;t been in third grade for a while." Schoolwide, students have been prepping for the show and the standardized test since January, Thomson said.

The energy inside the school&#8217;s gym was evident Thursday as more than 500 students cheered alongside their classmates, and gasped and fretted when trying to figure the answers to puzzling questions.

Fifth-grader Riya Oshiro, 10, said preparing for the game was no sweat compared to standing in front of a gym full of peers.

Test your wit on the Firebird quiz"Are you smarter than a Firebird?" Test your skills on a few of the questions Amelia Earhart Intermediate School students had to answer during Thursday&#8217;s quiz show.

A flounder is a type of fish. The flounder can change its color to match the surroundings. If a shark approaches, the flounder lays still, blending into the sandy ocean bottom.

This is known as .

I was an American abolitionist, orator, author, statesman and reformer, and was one of the most prominent figures in African American history. My writings first appeared in "The Liberator" published by William Lloyd Garrison.

The TerraNova national standardized test will be given to students in grades 3 through 11 in DODDS-Pacific from March 9 to March 27. Dates of testing vary by school.

Before the exam, encourage children to:

Get plenty of rest;

Set the alarm clock to avoid rushing in the morning and ensure on-time arrival to school.

After the exam, parents should:

Communicate with their children after each testing day;

Listen to their frustrations, worries and concerns;

Remind children to feel satisfied that they gave their best during the test;

Plan light and relaxing activities for the family to enjoy.

For more information on the test, or to see how students performed in 2008, go to www.dodea.edu.